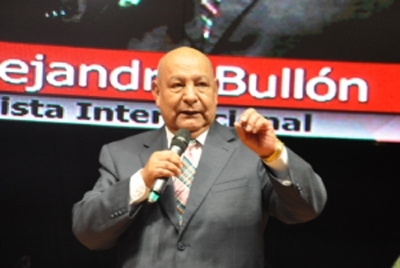 Adventist leaders in West Venezuela are rejoicing
after local evangelism efforts drew thousands of people at the Palacio de los
Eventos in Maracaibo for an evangelism impact event.

From the start of their big city campaign, which
took place March 1-22, more than 8,000 people received Bible studies in a city
with more than 2.8 million inhabitants, organizers said.

Adventist evangelist Alejandro Bullon culminated
the city effort with a series of messages on God’s triumphant grace. The
evangelistic campaign was streamed live over the internet and resulted in some
1,200 new believers joining the church and some 3,000 more interested individuals
who are currently in Bible studies.

Pastor Toala said the church is planning to
organize a life and hope center in April there in Maracaibo.

The efforts fall under the urban evangelism plan
in the region, which involved the work of more than 30 pastors and 70 laypersons.
They led in visitation and small-group ministries and preached in congregations
during the previous weeks and months, according to Pastor Fernando Toala,
personal ministries director for the church in West Venezuela.

“Our emphasis in this effort is to organize a
life and hope center at the end of April to focus on presenting the message of
salvation to the urban community here,” said Toala. He said the center would
offer culinary classes, family counseling and therapy, as well as many other
services for the community.

Toala said the church is doing its part in
sharing the hope of a better life in Jesus. “The people of Venezuela need to
cling to a greater hope right now more than ever and we are seeing the work of
the Holy Spirit touch the lives of many, so we are thankful to be part of sharing
the hope that is only in Christ Jesus.”