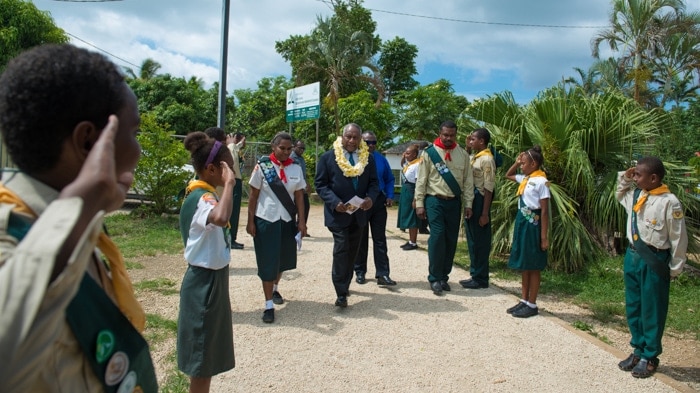 Vanuatu President Baldwin Lonsdale and a delegation from his office attended the worship service this past Sabbath, Nov. 26, at Portoroki Seventh-day Adventist Church in Port Vila, the republic’s capital city.

The church program began with a welcome by the Pathfinders followed by Sabbath School, singing and the Divine Service led by Vanuatu Mission secretary Pastor Charlie Jimmy.

In his closing remarks at the end of the service, Lonsdale, who also happens to be an ordained Anglican priest, commended the Adventist Church for its education system. He said the schools run by the Church have produced many good quality leaders who are serving the country in different areas.

Lonsdale said he was touched by the “children’s corner” segment, where the children went up to the front and listened to a story before the sermon. He said he chose to attend the worship service because it’s all part of what he had been doing: meeting with people where they are.

Elected state president in 2014, Lonsdale came to Port Vila from the island of Motalava in Torba Province. Before becoming an Anglican cleric, Radio New Zealand reported, he “was a senior civil servant and the secretary general of the Torba provincial government.”

According to The Seventh-day Adventist Encyclopedia, Adventism has had a presence in Vanuatu, formerly known as the New Hebrides, for over 100 years.

“The first Seventh-day Adventist missionaries to work in the New Hebrides were C. H. Parker and his wife, who arrived there from the Victoria-Tasmania Conference Aug. 11, 1912,” the Encyclopedia noted. “They settled first in Port-Vila, the capital, but were asked by the government to move into a more needy and primitive area. After a tour of several islands with E. S. Butz, it was decided to settle on Atchin, famed for its notorious cannibals. The [Adventists] were the first missionaries to live there.”

At the end of 2014, there were 21,354 baptized members worshipping in 85 churches and 130 companies in Vanuatu. In 2014, an evangelistic campaign broadcast daily on television added 2,213 members to the church. The Adventist population represents roughly 7.5 percent of Vanuatu’s 286,429 people, or one in every 13 people there.

Adventist life in Vanuatu has not been without its tragedies. In 2015, Tropical Cyclone Pam hit the islands killing 11, and resulting in the destruction of at least four Seventh-day Adventist churches. Seven months after the storm, the first of those churches was rebuilt and opened for worship.