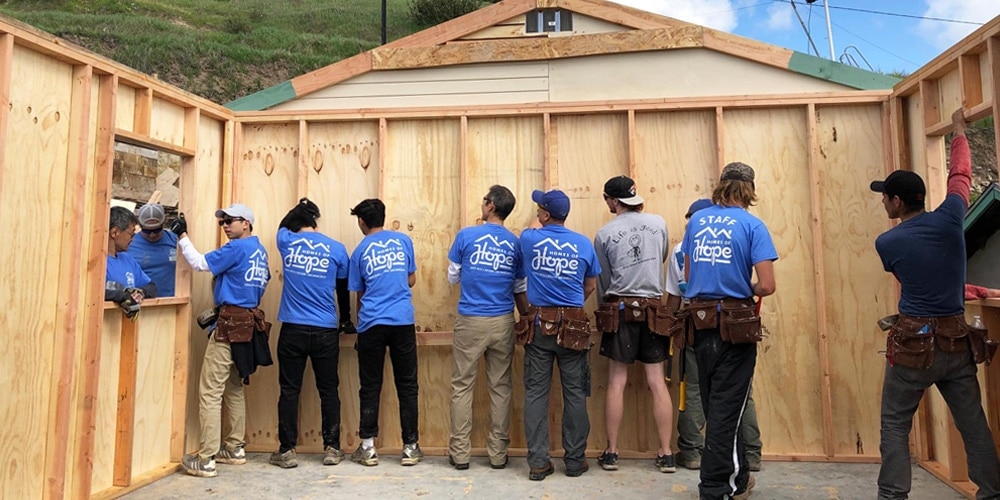 “I saw in them such a desire to bless God by blessing the poor and needy,” Janet Lambert, Youth With a Mission (YWAM) San Antonio Del Mar Campus director, said of a team of 26 missionaries from Upper Room Fellowship company (URF) in Temple City, California, United States, who partnered with YWAM in February 2019.

The URF team spent a weekend several hours south in the Tijuana, Mexico, region with Homes of Hope, an organization that grew out of YWAM. Missionaries team up with Homes of Hope to build brand-new homes for deserving families in just a few days.

While there was no shortage of hard work, the URF team was also blessed with many miracles that they believe were the result of constant and specific prayer. Just before the project was set to begin, Lambert discovered that the building site was almost impossible to get to. All roads were closed, and the team’s tool truck got stuck in the mud. But after only 30 seconds of wondering what to do, she recalled, a truck with a crane coincidentally drove by the main road and circled back to help free the team’s truck.

"In all these years that we've been working there, I've never seen [a crane] out in the community like that," Lambert said. “Once that happened, I just thought, ‘God is here today, and we’re going to get this house done.' I think that was a miracle," she said.

In addition to the hands-on work of building the home, the group fellowshipped and worshipped with local residents.

URF member Suzie Kim spoke about her experience attending a prayer group where she received unexpected prayer for her family. “I thought I was here to be on the giving end, but I received a gift also,” she said.

Another special blessing came, team leaders said, as the group had the opportunity to meet Blanca and Maurillo and their family, for whom they were building the house.

“My favorite part of the trip was being the first guests invited into the family’s new home and praying for and blessing their home,” URF senior pastor Kevin Camato said. The team also gave the family a Bible. “Although there was a language barrier, we could see how happy they were through their smiles,” said URF member Jackson Kim.

The URF outreach coordinator agreed. “Everyone had a hand in this mission, whether they attended or donated to make it possible,” he said. “Don’t underestimate what you can do for God.”

Back at URF, the Saturday (Sabbath) service after the trip was full of testimonies. Members rejoiced to hear that Blanca and Maurillo had agreed to start Bible studies in just one month.