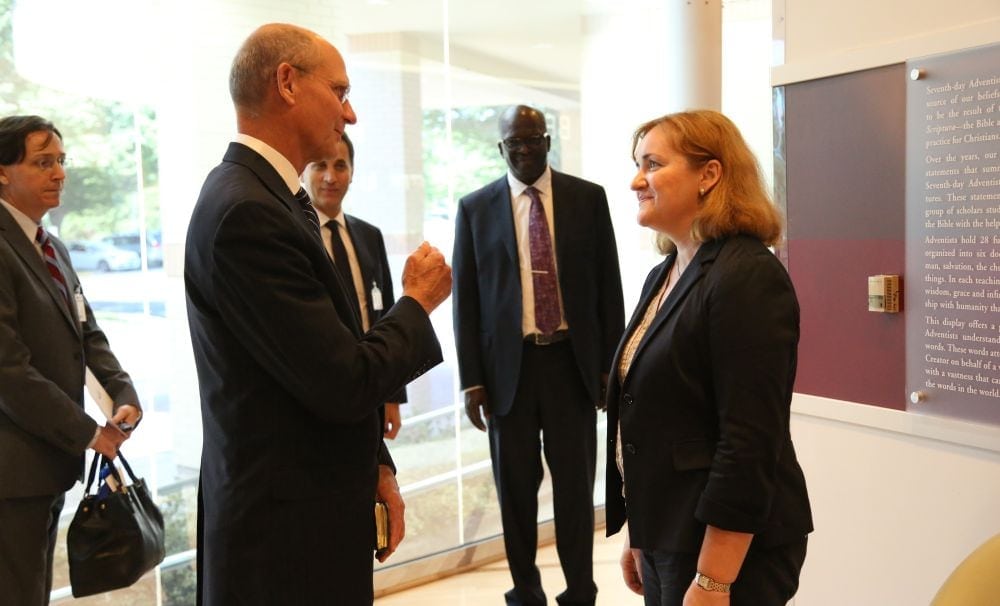 Natalia Gherman, Moldova’s candidate for the post of United Nations secretary-general, praised the Seventh-day Adventist Church’s global commitment to health care, education, and humanitarian assistance during a visit to the world church’s headquarters near Washington.

Gherman said faith-based organizations such as the Adventist Church could play a major role in promoting peace, development, and human rights around the world.

“I believe in the potential not only of the private sector, but also of the non-governmental sector, which is not now being used sufficiently,” Gherman told Adventist leaders. “Organizations such as yours represent a lot of resources and expertise, without which I believe we will never deliver the UN’s sustainable development goals and human rights agenda.”

Gherman, 47, is a career diplomat who has served as foreign minister, deputy prime minister and, most recently, acting prime minister of Moldova, a former Soviet republic located between Romania and Ukraine. She also has represented Moldova in NATO and the Organization of Security and Co-operation in Europe (OSCE).

Gherman is in last place in a nine-way race to replace UN Secretary-General Ban Ki-Moon when he steps aside at the end of the year, according to an informal poll of UN Security Council members this week, The Associated Press reported.

Gherman, visiting church headquarters in Silver Spring, Maryland, spoke candidly about the hardships that her country has faced in the years since it gained independence following the breakup of the Soviet Union.

“In spite of our rich history and heritage, we had to start from scratch 25 years ago and to build a state anew — and it’s not an easy task,” she said.

This experience, she said, parallels that of many nations around the world struggling to establish political and economic stability. Grappling with these challenges within her own country, she added, has strengthened her commitment to promoting global security and development through the UN.

She applauded the Adventist Church’s efforts to provide health care and education to millions of people through a worldwide network of hospitals and schools. She also expressed appreciation for ADRA’s work on providing humanitarian assistance on its own and in cooperation with the UN and other agencies.

Ted N.C. Wilson, president of the Adventist world church, thanked Gherman for showing understanding, humility of spirit, and a desire serve humanity. He shared with her a passage from the Bible that, he said, provides essential guidance for those who hold high office.

“And what does the Lord require of you?” said Wilson, quoting from Micah 6:8. “To act justly and to love mercy and to walk humbly with your God.”

Ganoune Diop, public affairs and religious liberty director for the world church, who invited Gherman to visit, gave her an overview of the Adventist Church’s work, including its educational institutions and hospitals and its more than a century of promoting religious freedom as a fundamental human right.

“These, which we offer to the whole human family, reveal remarkable intersections with many of the goals and values of the United Nations,” he said.