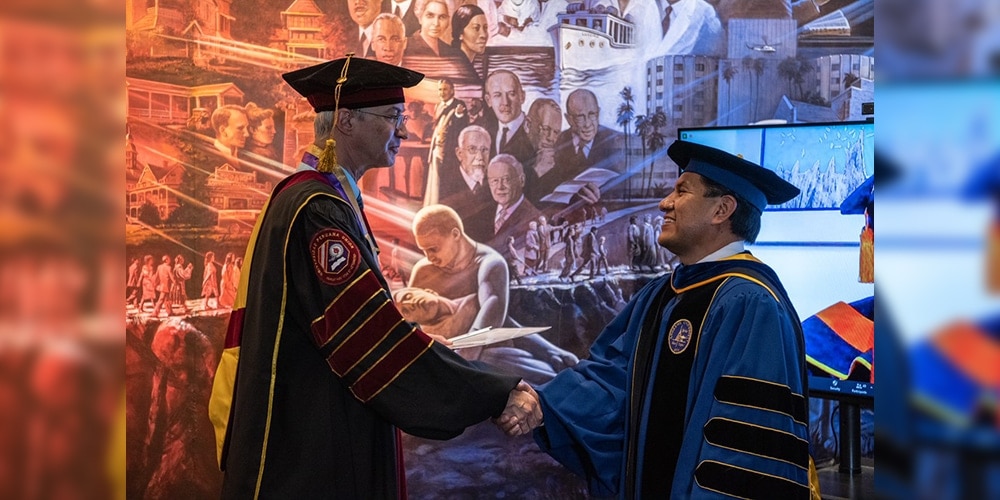 UPeU acknowledges “the professional, academic, and research trajectory of recognized scholars,” university president Gluder Quispe said in his opening remarks. It is against this background that the school board voted to confer on Poirier the honorary doctoral degree “for his recognized professional service and career at the Ellen G. White Estate.”

Wilson also expressed appreciation and congratulatory remarks. He congratulated Poirier, whom he called “one of our finest employees at the General Conference,” and added, “He represents high dedication.” Wilson told those attending the ceremony that Poirier’s diligent service “has helped to enrich the White Estate and God’s worldwide church.”

A Lifetime at the White Estate

Early on, when Poirier was still a pre-teen, he showed an interest in the writings of Ellen G. White. During his high school and college years he made several contacts with the White Estate regarding the possibility of interning as a research assistant at the office. A year into his post-graduate work, Poirier was issued an invitation to come to the White Estate at the General Conference, then located in Takoma Park, Maryland, for a four-month internship, assisting with various projects.

Poirier impressed everyone in the office with his knowledge, dedication, and commitment to his work. The four months was extended. Then, in 1982, a White Estate assistant director decided to take a call to Pacific Press Publishing Association. This created an opening. A position normally offered to someone of greater ministerial experience was offered to this 24-year-old young man “on a trial basis,” and he has continued to work for the White Estate since then — the only position he has held in his entire career.

Besides serving as White Estate research assistant and assistant to the director, Poirier has also been assistant director (1987-1997), associate director (1997-2003), and vice-director (2003-present).

Throughout the years, Poirier has made considerable contributions to the task of increasing the understanding and availability of Ellen G. White’s writings. One of his first assignments after being hired was to assist Arthur White, Ellen White’s grandson, as he researched materials for his biography of White’s life. Poirier said he has counted it a privilege to have worked with a direct descendant of Ellen White.

Poirier serves as liaison with the 23 Ellen G. White research centers around the world and was instrumental in the establishment of several of them, from Korea to France to Nigeria. Before the development of websites and apps, when CD-ROMs were first introduced, Poirier was responsible for placing EGW’s writings into digital, searchable format. He also gathered the content for a separate CD-ROM, titled Legacy of Light, that offered collections of photographs, videos, and other multimedia resources for researchers and members.

Poirier is also curator of the Ellen G. White vault — the physical place where her letters, manuscripts, library, photographs, and other resources are kept. He has served as editor responsible for moving EGW’s letters and manuscripts toward online publication, as well as preparing several collections on EGW for publication. Among them are the four volumes of Ellen G. White 1888 Materials, the 21 volumes of Manuscript Releases, and the annotated series of Ellen White’s letters and manuscripts. One of Poirier’s recently completed projects involves a forthcoming publication that draws EGW’s statements about the three angels’ messages into one volume.

During the September 16 ceremony, and after the reading of the UPeU Board resolution granting Poirier the honorary degree and the formal investiture proceedings, he addressed those following the ceremony in person and online.

“Thank you for this very unexpected honor,” he said. Poirier thanked the UPeU administration, his colleagues at the church headquarters, whom he called “my White Estate family,” and those in similar centers around the world.

Poirier made clear that as Seventh-day Adventists “we believe that the light of the Holy Spirit continues to shine through the gift of prophecy, and that this gift was given to Ellen G. White, whose writings point to the greater light of Christ and His Word.” And he emphasized, “I want to take the opportunity of this occasion to expressly affirm that I have not a shadow of a doubt that Ellen White’s prophetic ministry was inspired by the Holy Spirit. She was not mentally ill; she was not a fraud — she was the Lord’s messenger.”

After briefly sharing some of the unique tasks that became part of his job description during his four decades at the White Estate, Poirier added, “If I had discovered things in my work that raised doubts and suspicions about Ellen White’s claims, I had another career to turn to. But rather than causing me to lose faith, my exposure to Ellen White’s writings … has only strengthened my confidence in her prophetic gift.”

Poirier has worked under five directors during his tenure, including Jim Nix. A few years ago, Poirier assisted Nix with the design and content of the new Ellen G. White Visitor Center at the Adventist Church headquarters. When asked about Poirier’s contributions, Nix said, “A summary of my view of Tim’s impact at the White Estate during the time I worked at the main office, from a human perspective, would be that he is the glue that holds things together. Everyone goes to him for everything, and almost without exception they leave with an answer to their questions.”

Nix added that one of the many things about Poirier that he admires and respects is “that he does not run around talking about himself.” “I cannot imagine the day when he retires,” Nix said. “The White Estate will definitely have lost an irreplaceable asset.”