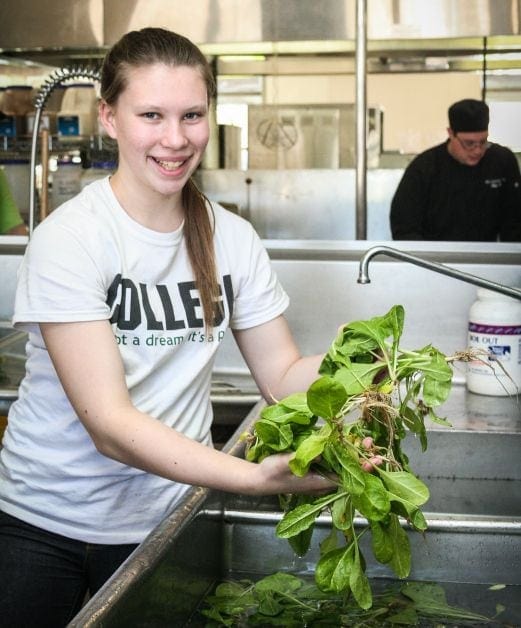 A Seventh-day Adventist boarding school in the U.S. state of Oregon has revived its agriculture program to give students the experience of growing fruits and vegetables and to put wholesome food on the table in the cafeteria.

Even more important, say Milo Adventist Academy students, is the opportunity that the program provides to connect with God.

“When I’m up there sometimes in the silence, I think how God has provided a bunch of lessons for our lives,” said Zabdiel Brigido, a senior at the academy in Days Creek, Oregon.

He said that pulling weeds helped him reflect on his life and how “we should be working hard with God’s help to take out all the bad things, constantly purifying our lives.”

Milo Adventist Academy, which developed an all-organic and non-GMO agriculture program this last school year, is among several North American schools that have active agriculture programs. At least three of those schools, like Milo, have chosen to implement organic practices in their farms.

Adventist Church cofounder Ellen G. White encouraged schools to put students to work in growing crops, writing in the book Education, p. 211, “It would be a great aid in educational work could every school be so situated as to afford the pupils land for cultivation, and access to the fields and woods.”

Milo Adventist Academy has a history of providing agricultural work-study opportunities for students. Milo’s location was originally the Corwin Ranch, a family farm sold to the church’s Oregon Conference in the 1950s for the purpose of building the academy. In the early years, the academy had a dairy and chickens that provided milk and eggs to the cafeteria. In 1964, world-renowned Adventist agricultural consultant Jacob Mittleider conducted an experiment in winter gardening at Milo. He and his student workers built greenhouses that produced fresh vegetables for the cafeteria all year long.

“I remember having to get up before daylight and moving irrigation pipe for hours before getting to eat breakfast,” said Dan Santee, who graduated in 1971. “That farm made men out of a lot of boys. I still use what I learned working there on my farm and with my own herd.”

The dairy eventually closed, and the farm was closed and reopened several times over the decades before finally being closed because of a lack of finances.

“I for one was disappointed when they closed it,” Santee said. “I am thrilled that there is a renewed interest in getting the farm going there again.”

The students are excited, too.

“The thing I like the most is working outside, among nature,” said Yulemi Hernandez, a junior.

She said she has learned “how to follow orders and that even if no one is watching you, you have to work.”

Jeff Birth, who is overseeing the agriculture program, has worked with the students to remove debris from the old greenhouses and build planters and heated propagation tables for germinating seeds. The greenhouse crops include broccoli, tomatoes, peppers, eggplant, snow peas, onions, asparagus, sweet potatoes, several varieties of greens, cabbage, squash, and melons. One hundred asparagus plants are already growing in the outdoor garden and will start producing next year.

Students have already enjoyed cherries, pears, and grapes from Milo’s orchards, as well as 200 pounds (90 kilograms) of Milo apples mashed into applesauce by the Stenseth family in nearby Bend, Oregon.

The agriculture program is collaborating with the academy’s equestrian center and cafeteria to create compost for the gardens. The barn workers clean the horses’ stalls each day. The used wood shavings and manure are hauled to a compost pile that is turned every week. After a year of turning, about $5,000 worth of rich compost soil has been created — with no weeds, Birth said.

The first year of the agriculture program was donor-funded. If you have a heart for agriculture, contact program director Jeff Birth at [email protected] for more information.