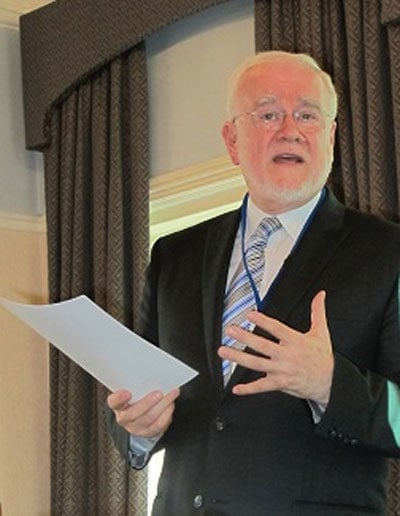 Bertil Wiklander, president of the Trans-European Division
(TED), has informed union presidents and division office staff that he is
planning to retire as of July 31.

Wiklander announced his decision at a staff devotional on February
12 during two days of leadership training for union presidents. Appreciation
for his service was expressed by the staff through TED Executive Secretary
Audrey Andersson, and by Sandra Grice, General Conference Auditing Service
(GCAS) associate director.

“I have enjoyed my work and the many people I have come to
know in various parts of the division, and I will leave my responsibility with
gratitude to God and my colleagues. I will miss the fellowship and friendship
within our office, which I think is something very unique and precious. May God
bless you all and his work in this part of the world,” said Wiklander.

In a brief statement, he continued: “In July this year I
will have served the division for 19 years and in September I will have reached
an age that is well beyond pension age. I am grateful to God for the blessings
I have received, the many things I have learned, and for the wonderful team I
have had around me in the division office, and in the unions and other fields within
the division. It is good for me to be able to spend more time with my family,
and there are some interesting book projects and biblical research that I want
to attend to in my retirement. I have talked to Elder Ted Wilson at the General
Conference about this, and he will care for the process of electing a
successor.”

Prior to coming to the TED, Wiklander served in his native
Sweden as principal of Ekebyholm School, union executive secretary, and union president.

In the past 19 years Wiklander has exhibited a passion for making
God known in the challenging secular environment of many of the TED countries.
His enthusiasm has inspired leaders at all levels of the church.

During his term of service the division has had two
territorial realignments. Throughout the transitions Wiklander provided stable leadership
and helped the division to redefine its vision and purpose, keeping the focus
on the mission of God.

It was appropriate that the announcement came during
leadership training because Wiklander is an advocate of growing leaders and
providing opportunities for people to try new ideas and to grow.

We wish Wiklander and his family God’s richest blessings as
they transition to a new phase of life. We ask for your prayers for God’s
guidance as Elder Wilson leads the process to elect a new president.