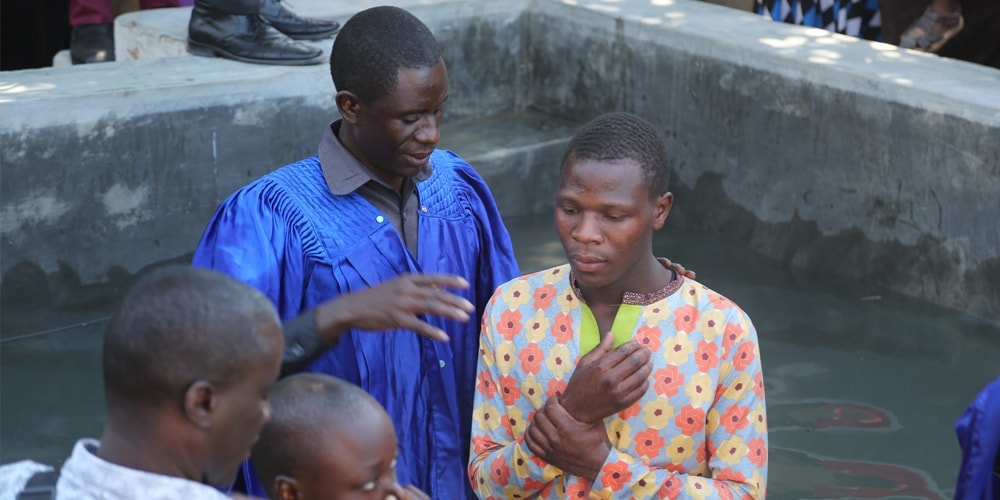 More than 28,000 people sealed their commitment to Jesus and the Adventist message during massive baptismal ceremonies across Tanzania after evangelistic meetings in June 2021. The series took place under the theme “Shangwe katika njia yake,” a Kiswahili phrase that means “Joy in His way.’’

Meetings were broadcast live from the city of Dodoma, at Kizota Seventh-day Adventist Church, and retransmitted to more than 3,000 sites across the country for three weeks.

Regional church leaders said the initiative’s success resulted from a collaboration between Hope Channel Tanzania and Morning Star Radio, as well as a purposeful use of social media.

The main speaker for the series was Mark Walwa Malekana, president of the South Tanzania Union Mission of the Adventist Church. Malekana discussed true joy as defined in the Bible. “Biblical joy is a fruit of the Spirit that does not change with circumstances,” he told the new members after one of the baptismal ceremonies. “[I know you] understand clearly that only Jesus can protect you against the hardships of the world,” he added.

Leaders said that the participation of individuals with various talents helped to make the event wholistic. Each sermon was preceded by health and family life presentations, with practical solutions for social issues. “Not only did the shows arrest the attention of people thirsty for physical and mental fitness, but they also provided tips for maintaining family bonds,” they said.

Besides church health workers who volunteered, the government of Tanzania sent equipped nurses who were testing attendees for some non-communicable diseases.

Organizers said that church elders and choirs were involved in compassionate ministries. They visited people in need in the slums of Dodoma, listening to them and providing financial aid. One of the groups participating in the outreach shared how they built a shelter and gave some money to an older woman who had been making a living from collecting used bottles in dumps. Benefactors were shocked when the woman attended Saturday (Sabbath) services and returned tithe from the small amount of money they had given her. She was eventually baptized.

An army officer who had been discussing with a pastor about the existence and intervention of God in the life of His people requested to be baptized as well. She testified to God’s presence after what she called miracles in her life since the time she began studying the Bible with a pastor.

Since 2016, the use of new media in Tanzania has been instrumental in bringing thousands of new members every year to the church, church leaders reported. Most of the meetings are organized under the umbrella of Hope Channel.