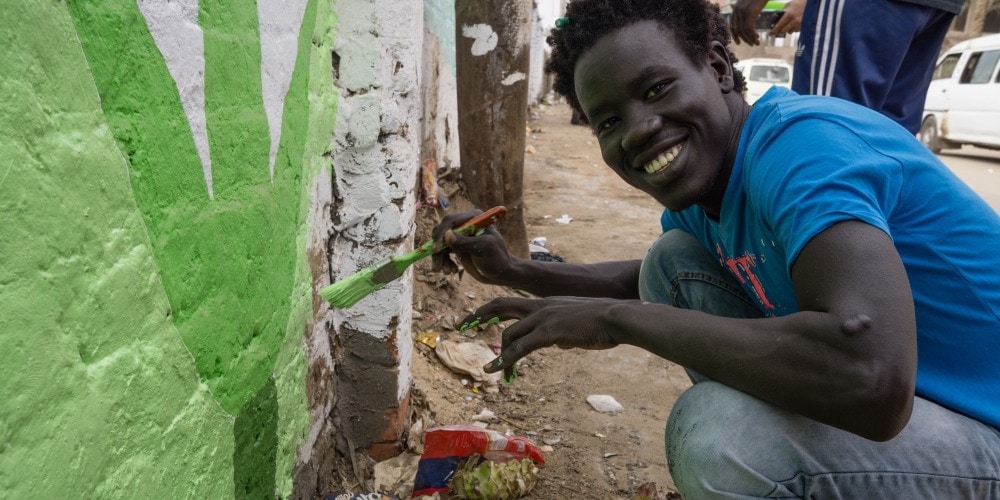 By Chanmin Chung, communication coordinator for the Middle East and North Africa Union

A bustling Cairo street got a facelift — and a message of hope about God — when a group of Adventist students grabbed brushes and cans of bright green, blue, and white paint.

The 20 students from Egypt, Lebanon, and the United States transformed a nondescript, graffiti-covered wall at the front entrance of Nile Union Academy into a mural of papyri that is attracting second looks from passersby.

As a final touch to the 200-meter (218-yard) mural, they painted in Arabic, “Praise God in the good and the bad,” a common phrase in the Arab world.

“Tens of thousands of people who never noticed us before now know we are here,” said Richard Doss, principal of Nile Union Academy.

The project, sponsored by the Adventist Church’s Middle East and North Africa Union, which includes Egypt, was to beautify the school and to create a connection point to the community.

The students from the academy, Middle East University in Beirut, and Southern Adventist University in the U.S. state of Tennessee, also picked up garbage along the street during the four-day project last week.

The results have instilled a new sense of pride in the academy students.

“We feel like this shows that we care about people in this community and that we have a good school,” said Anthony Rezk, an Egyptian student.

The design of the mural is a simplified variation of a traditional papyrus motif that is in harmony with Egypt’s visual vocabulary. Similar painting projects took place last year at the Egypt-based Zeitoun Adventist School and the headquarters for the church’s Egypt-Sudan Field.

Outside Nile Union Academy, people in the neighborhood stopped to take photos and to help the students with the painting.

Rebekah Helsius, a freelance U.S. artist who oversaw the project, said the artwork has already had a positive impact on the community.

“The painting process garnered immediate reactions from the passersby,” Helsius said. “It creates a space in a time where cultural and religious differences are put aside.”

Profile
One Day Online, One Day In-Person in the Digital Middle East
Integrating every church media platform to impact lives across the region.
News
Students Compete in ‘Hackathon’ for Adventist Mission