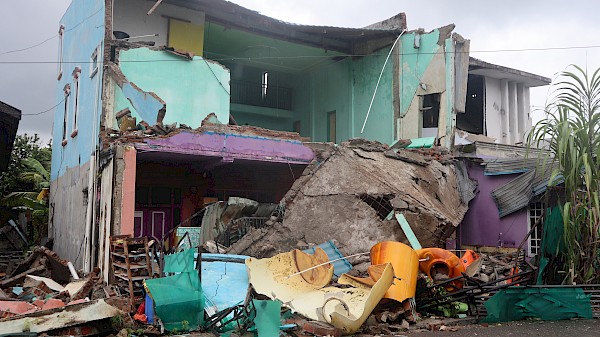 By: Adventist Development and Relief Agency in Indonesia

The districts of Mamuju, Majene, and Poliwali Mandar were affected the most, with 932 people reported injured and 84 deaths. The earthquakes, which occurred at 2:35 p.m., 1:28 a.m., and 8:32 a.m. local time, caused landslides that blocked roads in some areas and cut off access to bridges. Additionally, according to local reports, more than 1,100 houses were destroyed, including the governor’s home.

“The districts badly affected are inland, so there wasn’t a tsunami warning, but many were evacuated to the nearest hills, as most of them lived near the coastal area,” Clinton Rappell, country director for the Adventist Development and Relief Agency (ADRA) in Indonesia, said.

Rappell said that ADRA is working with other non-governmental organizations (NGOs) to help coordinate relief efforts.

“The most urgent need for people is getting them to safe shelter,” Rappell said. “Most people are traumatized and are afraid to go inside their houses. Ever since the devastation of the Palu earthquake in 2018, the damage done is still fresh in their memory to this day.”

“We are also working with Adventist churches in the Mamuju districts, and an Adventist youth organization called Youth Emergency Services, or YES, to provide aid to church members with shelter, food items, hygiene kits, and medicine,” Rappell said.

“Our work is just beginning once a natural disaster occurs, and no matter the crisis, we keep going, because the need is great,” he said.

Indonesia is prone to earthquakes because it is located on the Ring of Fire, an arc of volcanoes and fault lines around the Pacific Ocean basin. A majority of the world’s earthquakes occur in the region.

ADRA is the international humanitarian arm of the Seventh-day Adventist Church, serving in 118 countries. Its work empowers communities and changes lives around the globe by providing sustainable community development and disaster relief. ADRA’s purpose is to serve humanity so all may live as God intended.