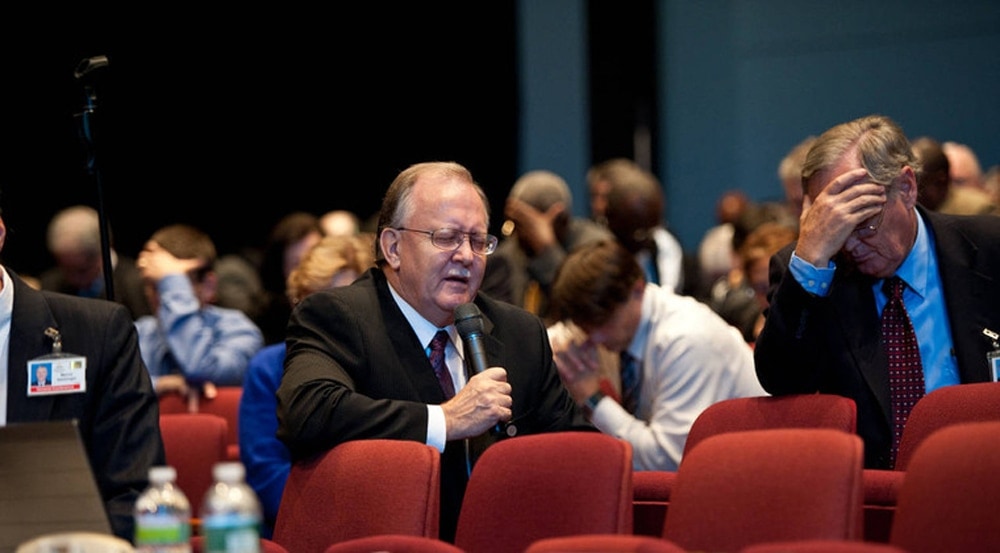 Reprinted with Permission of the Deseret News

Nothing — not surviving a car wreck en route to his wedding, nor being a
Seventh-day Adventist missionary, nor years in the pulpit — had prepared Dan
Jackson for the challenge his daughter threw at him on a Saturday afternoon.

The eldest of
his three teenage children at the time didn't appreciate the weekly ritual of
attending Sabbath services where dad was the preacher.

“ ‘You make us
go to church because you don't want to look bad,’ ” Jackson recalled her
saying. "It hit me like a brick, right between the eyes. I was
stunned."

After pondering
her words for a couple of hours with his wife, Donna, Jackson called the
children together to announce that when they turned 17 years old, attending
Rutland Seventh-day Adventist Church in Kelowna, British Columbia, where
Jackson served, would be their choice.

There were a lot of
people who thought I was stark raving mad," he said of his parishioners.
"Seventh-day Adventists have strong beliefs and a strong culture, and we
can force people into the mold, but we really don't help them in the long
run."

An upbeat man
with a puckish sense of humor, the 65-year-old Jackson draws on that experience
when puzzling out the challenges he faces as the Adventist Church's North American Division president. While the 151-year-old
denomination was born in the U.S., less than 10 percent of the membership
resides in North America. Leaders such as Jackson recognize decades-old methods
of outreach that worked among their aging membership aren't as effective as
they once were — particularly with young adults.

"We cannot
rely on methods that were developed and implemented in the ’60s. We're not
living in the 20th century anymore," he said. "So I (believe) that
thinking Seventh-day Adventists are realizing that we've come to a point in
time where the mission of the church is expressed in a way that is relevant to
our own culture."

That expression
may take forms other than traditional broadcasting outreach, weeks-long
evangelistic meetings in or near local churches and even the longstanding
practice of "literature evangelism," often carried out by
door-to-door salesmen hawking "The Bible Story" and
other family-oriented books.

It's this
"incarnational" style of religion, he believes, that not only
impresses today's post-modern youths but also had an impact in his own family.

He recalled his
youngest daughter being a "very self-motivated, initiative-taking kind of
person," leaving home in her mid-teens and returning "with a surprise
who became our grandson."

Dealing with
the unplanned pregnancy of an unmarried teen daughter, Jackson informed his
congregation's leaders and offered to let them call for another pastor if they
desired. He also told them it would be up to the congregation, and not their
pastor, to exercise any church discipline.

"Pastors
are people," Jackson said, explaining both his candor and the reason he
gave leaders that option. "Yes, congregations have expectations (of
members), but pastors also have to be able to negotiate an understanding (that)
my kids are people, they will make mistakes, but I'm going to love those kids
more than I'll love you."

One day, the women of
the congregation showed up at Jackson's home, asking to see his daughter. The
young expectant mother was a bit anxious, he said, until one of the church
members greeted her, "We've raised $400 and we're here to take you
shopping!"

What happened
after that? "She had a child," Jackson said, "but the experience
itself was so potent for her that it became the instrument of leading her back
to God again. Today, she is the principal of a 12-grade Seventh-day Adventist
academy. God is using her in an amazing way."

His eldest
daughter — the one who balked at weekly church attendance — continued to have
problems with the family's faith.

She "wound
up in the New Age, and her beliefs, which she maintained for a lot of years,
have now dissipated," he said. "She does not totally orient to
Christianity, but she has come a million miles. She has become very much closer
to Christianity." (Their third child, a son, remained faithful and is an
active church member today, Jackson said.)

Jackson
believes it was the example he and his wife modeled of faith lived, not merely
spoken, that helped close the gap.

On a recent
July afternoon in his office, Jackson, dressed in a charcoal suit, light blue
dress shirt and patterned tie, reflected on his life, his family and the
challenges the Adventist Church faces. The papers on his desk attested that his
is a working office, but Jackson's attitude was thoughtful and reflective,
albeit with a seemingly permanent twinkle in his eye.

Against a
backdrop of bookshelves displaying Adventist literature and Bible commentaries,
as well as mementos such as a stuffed polar bear doll wearing a Canadian maple
leaf sweater, Jackson said he felt a call to the ministry as a child. But the
urge was sublimated after he developed a desire for a political career,
planning on college degrees in economics, first, and then political science.

In one
unplanned moment, that political career vanished.

A 20-year-old
Jackson, driving to his wedding in Chase, British Columbia, fell asleep at the
wheel. Instead of pitching over the side of a mountain into a lake a thousand
feet below, the car veered left, crossed a lane of traffic and ended up in an
eight-foot ditch. Jackson walked away.

"When the police
came, they stood at the side of the ditch looking down at the car, and people
had gathered around, and they were asking how many people had died," he
recalled. "And I stood there, and it really started to hit me: My life has
been preserved, and for what? I began to pray, and sensed the leading of God,
and wound up in training for pastoral ministry."

That career
change placed Jackson in a pulpit for over two decades, along with a five-year
missionary stint at an Adventist college in Pune, India, from 1981 to 1985. The
experience, he said, was "a real, deep privilege. India is a great nation,
and the diversity there is kind of exhilarating. We were very free and felt
free to go into Buddhist temples and Hindu temples."

He said the
Muslim fruit-and-vegetable sellers in the community became friends, though he
still regrets, 30 years later, not having gone with one of them to their mosque
for prayers.

Jackson then
served as a college chaplain and later a church administrator in Canada before
his 2010 election to president of the North American Division, one of 13
Adventist Church regions worldwide. Jackson's five-year term ends next July, at
which time he could be re-elected.

Whether or not
he returns, the church Jackson helps lead continues to confront change. Along
with the pull of secularism is an aging congregation. According to the North
American Division's executive secretary, roughly 65 percent of current church
members are either baby boomers or were born before that generation; fewer than
15 percent can be classified as millennials.

That
"graying" of Adventism may be addressed by Jackson's hoped-for
"incarnational" form of outreach, but also by redefining how the
message is conveyed. One Adventist scholar maintains it's no longer a matter of
selling a given Christian brand.

"The
church’s ministry efforts were developed in a context very different from
today," Loma Linda University religion professor Zane Yi said. "Back
then, you could assume people were Christian, and denominations just had to
convince people, through arguments, that theirs was the right or best version.
Things are very different today, and Adventism, like many communities, has
struggled to figure out to communicate and minister effectively in a
post-Christian society."

Facing economic
realities, Jackson's division has seen changes old-timers might have dubbed
radical: In the past 12 months, the centralized media center north of
Hollywood, California, where the 85-year-old "Voice of Prophecy"
radio program and the decades-old "It Is Written" telecast were
produced, was disbanded, allowing those ministries to relocate to less
expensive areas.

In June, global
Adventist leadership voted to transfer the Pacific Press in Boise, Idaho, to
Jackson's division while closing and selling off the assets of the Review &
Herald Publishing Association in Hagerstown, Maryland.

Print publishing was
once an Adventist strength, but the availability of church writings on mobile
devices for free has contributed to the declining demand for printed books.
From 1985 to 2013, the Hagerstown operation's revenues fell by more than half, the Adventist News
Network reported.

Such moves —
and continuing tensions over the question of ordaining women to Adventist
pastoral ministry — are causing ripples within the Adventist community.

Andy Nash, a
Seventh-day Adventist who teaches journalism at Southern Adventist University
in Collegedale, Tennessee, says that a malaise affecting young Adventists has
many causes, including the recent shutdown of
"The Record Keeper," a $1 million Web-based film project that
portrayed Adventist themes through a steampunk motif.

"I've
never seen Adventist young people so excited about an official church
initiative as (I saw in) my students about 'The Record Keeper' Web
series," Nash said. "It grabbed their attention and got them thinking
about deep things. It was very disheartening (for them) to get excited and have
it taken away."

Church leaders say the
project was shown to have some theological issues but that they are willing to
consider similar outreach in the future. And while the decision was made one
level above Jackson's leadership role, its impact may be most keenly felt
within his church region, where young adult retention is a hot topic.

Other avenues of
growth for Adventists in North America exist, one scholar said. Ronald Numbers,
a former Adventist and University of Wisconsin professor who authored a
critical biography of church co-founder Ellen White, said Adventism's American
future lies in the waves of immigrants coming to the nation's shores.

"It
probably hasn't done any worse in the U.S. than many other Christian
communities," Numbers said via email. "But it's grown worldwide
faster than most. Recent growth in America has come largely from the Latino
community, leading some observers to talk about 'the browning' of the American
church."

Perhaps no
feature distinguishes Seventh-day Adventism from other Christian faiths as much
as its adherence to what followers call the "Bible Sabbath," observed
on Saturday, after the pattern of ancient Israel and as noted in Exodus
20:8-11.

In 1888, church
leaders had to defend their right to worship on Saturday and work the rest of
the week during U.S. Senate hearings on a "National Sunday Law" that
would have criminalized working on the first day of the week. The bill never
passed, but the prospect galvanized the 25-year-old movement into a course of
religious freedom advocacy that continues today.

Adventists have
often made the Sabbath a cornerstone of outreach efforts, with preachers and
evangelists offering up to $100,000 to anyone who can find a Bible verse
showing the day of worship had been changed to Sunday.

Today, the need for a
regular day off from work may be greater than ever in a 24/7 society,
but the notion of evangelizing about a given day of the week might not best
convey the message. Instead, Jackson harkens back to how he responded to his
children's challenges about sabbath worship to stress the need for Adventists
to focus on the life-enhancing role the Sabbath plays.

In practice, he
contends, that means demonstrating through their lives that the day is "an
opportunity to rest, to take a break, to commune with nature, to build
relationships, so that the Sabbath is no longer some obscure teaching, but
rather, it's who I am, it's something I express on the seventh day, but also on
the other days of the week."