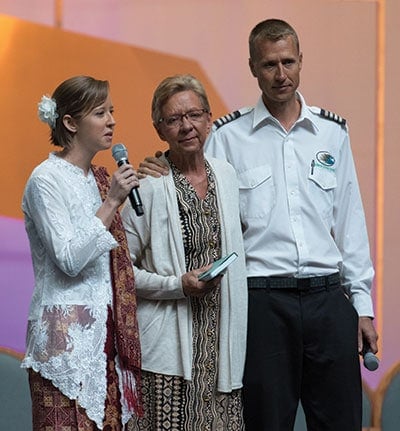 To stay open and take great risks, or to close the hospital doors to those in desperate need of medical care?

That was the question facing Dr. Gillian Seton and her team at the Cooper Adventist Hospital in Liberia, during the height of the Ebola crisis.

Seton, a 2008 graduate of Loma Linda University Medical School, had just recently arrived in Liberia when the crisis hit.

“There were already outbreaks in several villages,” she told a crowd of several thousand in the Alamodome during the Sabbath afternoon program organized by the General Conference’s Office of Adventist Mission. “Hospitals were closed to the north and south of us, and that’s about the time we realized that we couldn’t stand alone on this,” she said.

The staff and Seton met for several hours discussing the options and made the difficult decision to keep the hospital open, despite the risk of the extremely contagious Ebola virus, because someone needed to provide medical services.

Recalling the risk involved, Dr. Seton explained, “Imagine you were handed a gun and a vest and were told, ‘Let us shoot at you, but don’t worry; this vest will protect you.’ ” Nevertheless, she and her staff continued to serve the thousands of patients who flooded to the hospital.

While Seton survived the Ebola crisis, over the years many missionaries have given their lives while serving. Tribute was paid on Sabbath to the 12 missionaries—including children and young people—who have died in foreign lands during the past quinquennium.

A special video paying tribute to missionary pilot Bob Roberts, who died in a plane crash in Indonesia, was shown. During an emotional moment, Roberts’s widow, Jan Roberts, along with her daughter, Stephanie, and son Gary appeared on stage and received a standing ovation from the many thousands of people in the Alamodome. Gary and his brother, Eric, continue the mission aviation work in Indonesia that their father began.

Evangelist Mark Finley shared a riveting story as he held an open Bible. The old book was stained by the blood of a missionary martyr, slain by a hired killer. More than 70 years after the murder, the child of the slain man and the child of the killer met at an evangelistic meeting being held by Pastor Robert Costa in Colombia. Both men had become Seventh-day Adventists, and through their influence, more than 100 people from their families also became baptized Adventists.

“Mission comes with a price,” said Finley. “A blood-stained Bible speaks to us that the sacrifice we make in mission is worth it!” 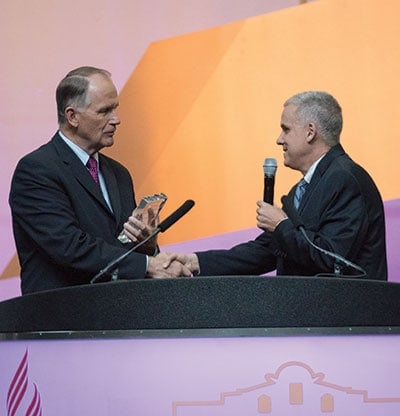 Throughout the program, the mission emphasis continued through inspiring music and stories.

During the past 25 years, by God’s grace and under the leadership of Michael Ryan, a general vice president of the church’s General Conference, Global Mission has expanded around the world, including numerous church plants, centers of influence and more.

“Twenty-five years ago, there were no Global Mission Centers, no Global Mission pioneers,” said Gary Krause, director of the Office of Adventist Mission at the General Conference. “But global mission was on his [Ryan’s] heart.”

Krause presented Ryan, who is retiring this year, with a plaque that read in part, “To Michael Ryan, for taking the seed of global mission and helping to grow a worldwide harvest for the Seventh-day Adventist Church.”

During the Sabbath afternoon program, Ryan and newly reelected General Conference president Ted N. C. Wilson encouraged members to become involved in mission through the church’s continued emphasis on reaching the world through the church’s strategic plan of “Reach up to God, Reach in with God, and Reach out with God.”

“Every lay member is to be involved, totally empowered, working with pastors. . . . I’m so excited that each of us can find a place in God’s great work,” said Wilson.

“Every person here has a spiritual gift,” Ryan told those in the Alamodome. “Ask the question, ‘What can I do to advance the mission of the Seventh-day Adventist Church?’ ”