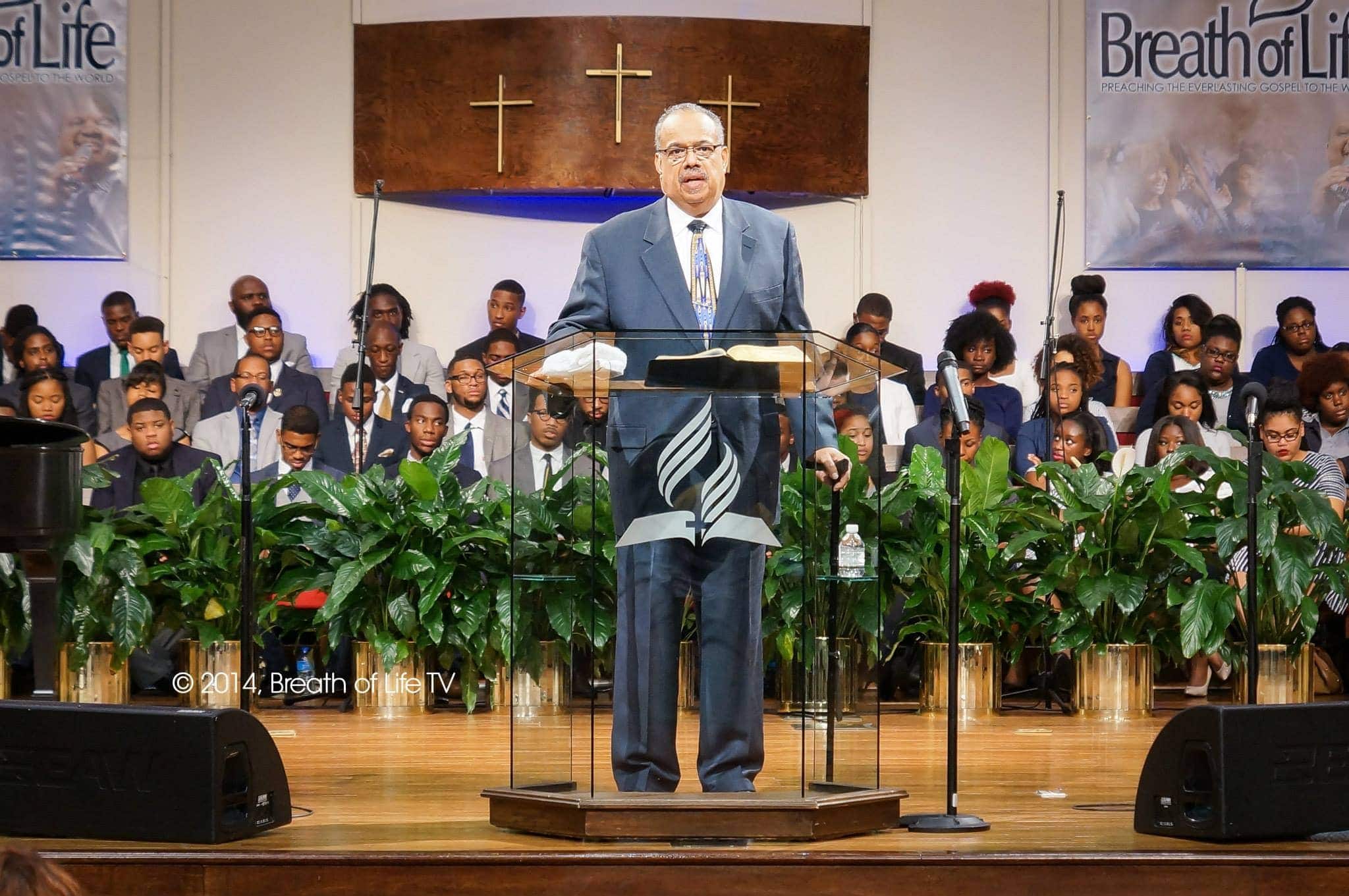 By: Mark A. Kellner, with reporting from NAD Communication

In May of 2001, Seventh-day Adventist pastor and evangelist Walter L. Pearson Jr., then the speaker/director of Breath of Life, the church’s television outreach focused on the African American community, gave the dedicatory sermon for the new building that would house the South Nashville Seventh-day Adventist Church, pastored by Carlton P. Byrd.

Pearson, who passed to his rest on June 7, 2020 at the age of 74, returned to Byrd’s congregation several months later as part of a series of workers’ meetings sponsored by the regional conference. Public evening-worship meetings were held there, and Pearson spoke each night.

As the series drew to a close, Byrd handed an envelope to Pearson, saying it was a formal request for the evangelist to return once more to South Nashville as a speaker.

“Byrd, you just want me to move to Nashville and set up residence here, and preach all the time,” Pearson said, smiling.

“That would be great,” was the younger preacher’s reply.

Byrd, who at the end of 2010 succeeded Pearson as speaker/director of the ministry, said one of the most impressive abilities the evangelist had was “to take a story, whether it’s a Bible story or an object lesson, and make it plain.” Byrd lauded Pearson’s “timing, his cadence, his ability to make it real,” and said that when Pearson led the Berean Seventh-day Adventist Church in Atlanta, “he did the children’s story every Sabbath” as well as the sermon. Storytelling “was his gift, that was his niche,” he asserted.

Pearson was “one of our greatest communicators, particularly in his narrative preaching and ability to tell a story,” Byrd added.

“His ministry was intergenerational,” Byrd said of Pearson. “He could reach people of all different age groups. Some pastors are great in evangelism, some in doctrinal preaching, [but] Elder Pearson had that gift to reach everybody in multiple settings.”

North American Division (NAD) president Daniel R. Jackson said, “Walter was passionate for the gospel of Jesus. While his powerful messages had been carefully thought through, they were delivered with ‘Spirit power.’ Thousands will be in God’s eternal kingdom who will trace their experience back to Walter Pearson.”

G. Alexander Bryant, NAD executive secretary, said, “Elder Walter Pearson was a great warrior of God and was one of the great giants of the Seventh-day Adventist Church. He was one of the most gifted homileticians of our day. His ministry and his leadership as the Breath of Life Speaker will result in countless thousands being saved in God’s kingdom. Some of them he knew, but most he will never know until he gets to the gates of Glory. He has left a legacy that will stand the test of time.”

NAD vice president Alvin M. Kibble said, “Pearson was the quintessential pastor/preacher. He preached with the fervor of the old-time evangelists and the eloquence of a master wordsmith. His timing, his style and humor were artfully and effectively crafted to deliver the message God had ordained. A careful student of the Word and of human nature, his sermons were biblically sound and socially relevant.”

Pastor Doug Batchelor, president of Amazing Facts International, was a longtime friend and colleague. “Walt came to Breath of Life about three years after I joined Amazing Facts, so we often shared time together at various convocations and camp meetings. We would laugh, pray, and commiserate together about some of the unique challenges of leading media ministries,” Batchelor said. “I was often personally moved by his messages. He was a gifted communicator and evangelist who will have many stars in his crown,” he added.

Pearson was born on November 18, 1945, in Mobile, Alabama. He was a graduate of Pine Forge Academy and then earned a degree in religion and theology from Oakwood College (now Oakwood University) in 1967. Shortly after graduation, he married Sandra Holland.

Pearson joined the Adventist ministry in 1969 as the associate pastor of the Glenville Seventh-day Adventist Church in Cleveland, Ohio, alongside his mentor and senior pastor, Harold L. Cleveland. Pearson was later ordained at the Allegheny West Conference Camp Meeting in 1971.

Because of his ability to relate to young people, Pearson was invited to be the Youth and Urban Ministries Director for the Allegheny West Conference. He later served as senior pastor of the North Philadelphia Seventh-day Adventist Church in Philadelphia and the Berean Seventh-day Adventist Church in Atlanta. While at Berean, he was also an executive board member of Mayor Maynard H. Jackson’s “Atlanta Religious Mobilization Against Crime.”

In 1991, he became the first Seventh-day Adventist inducted into the Martin Luther King Jr. Board of Preachers and Collegium of Scholars at Morehouse College in Atlanta. Since that time, Pearson’s influence has led to the induction of numerous Seventh-day Adventist pastors into that group, including Byrd in 2008.

In 1993, Pearson was called to the General Conference of Seventh-day Adventists world headquarters. Following a brief stint at the Ellen G. White Estate, Pearson moved to the world church’s Ministerial Association, where he was part of a team that trained Adventist pastors and those of other denominations.

“Walter was a great colleague and valuable member of the General Conference Ministerial Association,” said Nikolaus Satelmajer, former Ministry magazine editor and current consultant/discipleship coach for the Adventist Church’s Trans-European Division. “He was one of the speakers at a Ministry professional growth broadcast. It was a worldwide broadcast to thousands of clergy of various denominations. He preached a powerful and effective message. One viewer called us during the broadcast and told us they were about to leave the ministry. After hearing Pearson’s message, the minister decided to recommit his life and continue serving God as a minister.”

In 1998, Pearson became speaker/director of Breath of Life on the recommendation of C. D. Brooks, the Seventh-day Adventist evangelist who began the ministry with Walter Arties in 1974.

Along with his weekly Breath of Life television programs and campaigns in various cities, Pearson was the featured speaker for the North American Division’s Net2004 evangelistic initiative, “Experience the Power.” The series was transmitted via satellite to approximately 1,100 sites in North America, another 1,000 sites in the Caribbean, and tens of thousands of other locations around the globe. More than 4,000 people were baptized as a result of that campaign.

Pearson’s determination to deliver the gospel message allowed him to lead successful evangelistic meetings nationally, as well as internationally in cities including Kingston, Jamaica; Tema, Ghana; Warsaw, Poland; Nairobi, Kenya; and three campaigns in London, England. In all, Pearson preached in 67 different countries around the world.

In February 2006, Pearson suffered a stroke that nearly ended his life. By November of that year, he told the NAD year-end meeting, “I promised God that if He raised me up and gave me a voice, I would thank Him publicly, and I thank you for giving me that opportunity. I want to tell you today that God is powerful, and God is merciful, and I want to praise His name.”

Sandra Pearson passed to her rest in 2009. Two years later, Pearson married educator Patricia Patterson, who had also lost a beloved spouse. Byrd performed the ceremony, but not without worrying about addressing the man he’d always called “Elder Pearson” by his first name.

Whenever people spoke about Pearson, the conversation always came back to his ability to communicate the Bible’s message. “Elder Walter Pearson Jr. was … one of the most gifted narrative preachers I have ever seen,” said Christopher C. Thompson, communication director for Breath of Life. “His unique approach to biblical exposition inspired thousands of people globally. We have been inundated with expressions of love and reflections from around the world about how his preaching ministry changed lives.”

In one of his most appreciated sermons, “Standing Still in a Storm,” Pearson spoke of how Jesus was able to “reach everybody” by making the teachings of faith accessible to His hearers.

“What Jesus did was to take the natural situation and turn it into an illustration of the Word of God. He talked about the wheat and the tares, He talked about the mustard seed, and the more He talked, the more the people got excited. For all of a sudden all of this theology came clear to them, and they wanted him to keep on preaching.”

During more than four decades of ministry and broadcast evangelism, thousands wanted Walter Pearson to “keep on preaching,” too.