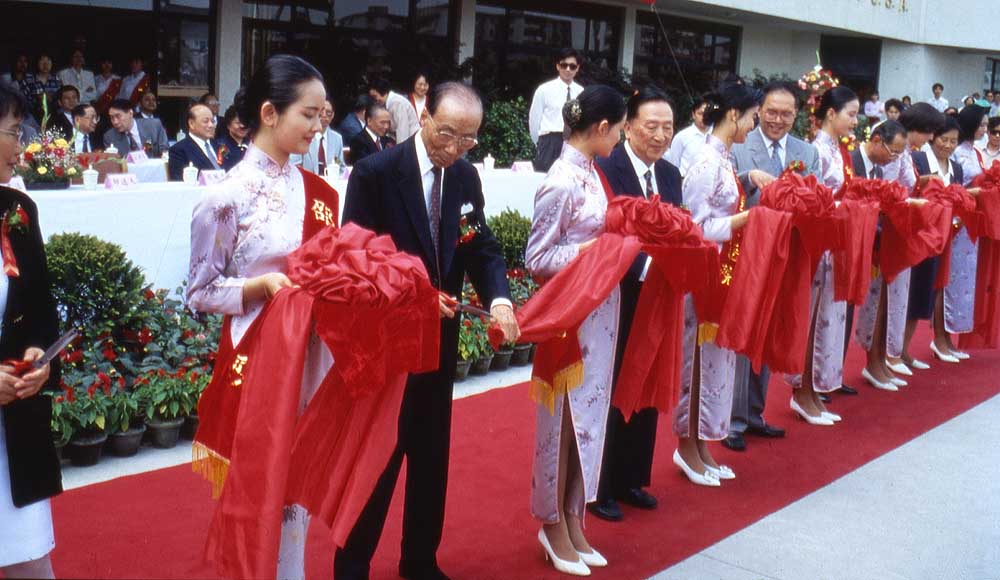 On January 7, 2014, Sir Run Run Shaw passed away at 106. Though global
media reports that ran the day after his death trumpeted his work and legacy as
a movie pioneer who, with his brother, brought Kung Fu to the big screen, Loma
Linda University Health (LLUH), and the Seventh-day Adventist Church remember
him in his passing as a philanthropist and humanitarian in the world of healthcare.

It is because of his benevolence that Sir Run Run Shaw Hospital was envisioned
and constructed, opening in 1994 in the Zhejiang Province in the People's
Republic of China. The hospital transformed the delivery of health care in what
was then a very poor community.

"From a childhood memory and appreciation for quality medical
care nearly 100 years ago to a modern hospital today, the connection between
Loma Linda and Sir Run Run Shaw is legendary,” says Richard H. Hart, president
of LLUH. “Loma Linda University Health is pleased to have partnered with the
Shaw Foundation to develop a superb western-style hospital in Sir Run Run
Shaw's home town. With China's current rapid development, we expect
this model to continue to impact the entire country for years to come."

Sir Run Run Shaw, a Hong Kong film magnate who dreamed of building a
Western-style hospital in his native country of China, provided partial funding
to the Zhejiang Provincial Government for the construction of a hospital in its
capital of Hangzhou in the early 1990s. His only request was that he wanted to
partner with the Seventh-day Adventist Church in operating the hospital.

Years earlier, Sir Run Run Shaw’s mother had received treatment from Dr.
Harry Miller, an Adventist physician, at a progressive hospital in China. He
was impressed by the compassionate, whole-person care provided to all echelons
of society, from government officials to day laborers. As a result, he vowed to
one day bring a similar level of care to his own community.

Says W. Augustus Cheatham, emeritus vice president for public affairs,
LLUAHSC, "I was saddened to hear that Sir Run Run Shaw, one of
China's respected businesspersons and philanthropists, had passed away. I,
along with Drs. David Morehead, Gorden Hadley, and Joan Coggin, had the
pleasure of visiting with him. It was notable to see that his interest was on
improving the health care in his home country where the population was
expanding so rapidly. His contribution that resulted in the construction of Sir
Run Run Shaw Hospital was unique and unparalleled. Our prayers are with Sir Run
Run Shaw's family."

The ribbon cutting for Sir Run Run Shaw Hospital was held May 9, 1994. In
its early days, the 400-bed hospital provided Western-style services in all of
the medical specialties practiced in the United States. The hospital was
awarded Joint Commission International Accreditation in December 2006. The
first facility in China to achieve this level of recognition and success, it
subsequently earned reaccreditation in 2009 and 2013. Today the 1,200-bed
tertiary care hospital treats more than 6,000 patients per day.

Jan Zumwalt, associate
director, Global Health Institute and executive director for international
affairs, LLUMC, was on-site at Sir Run Run Shaw Hospital when its namesake
visited. She recalls, "He didn't desire fanfare or attention. He had
been born in the province where the hospital is located; the area was very poor
at the time the hospital was built.

"He visited several departments and when asked if he wanted to visit
an outpatient clinic he said, ‘Yes, I want to see more.'" Zumwalt
remembers his deep interest in the facility that would not have existed had it
not been for his vision, and for his financial support.

"It was so important to him that the people of Hangzhou benefit from
the best in health care including education, modern equipment and facilities.
He was impressed," she says, "at what he experienced during his
visit.” At a celebration marking the Sir Run Run Shaw Hospital's 10th
anniversary, Zumwalt recalls a colleague describing the facility's importance
to Sir Run Run Shaw, stating that of the many philanthropic projects he had
supported, this hospital brought him the most satisfaction.

Sir Run Run Shaw made his fortune by selling martial arts movies through
Shaw Brothers film studio. In later life, he earned widespread respect as a
philanthropist. In 2002 he created the Shaw Prize, which is recognized as the
Nobel Prize of Asia. In 1977, Queen Elizabeth II knighted him for his
longstanding support of the Red Cross.

In addition to the
hospital, Sir Run Run Shaw generously provided hundreds of millions of dollars
in philanthropic support to projects in Asia, Britain, and the United States. He
is survived by his wife, Mona Fong, and four children.