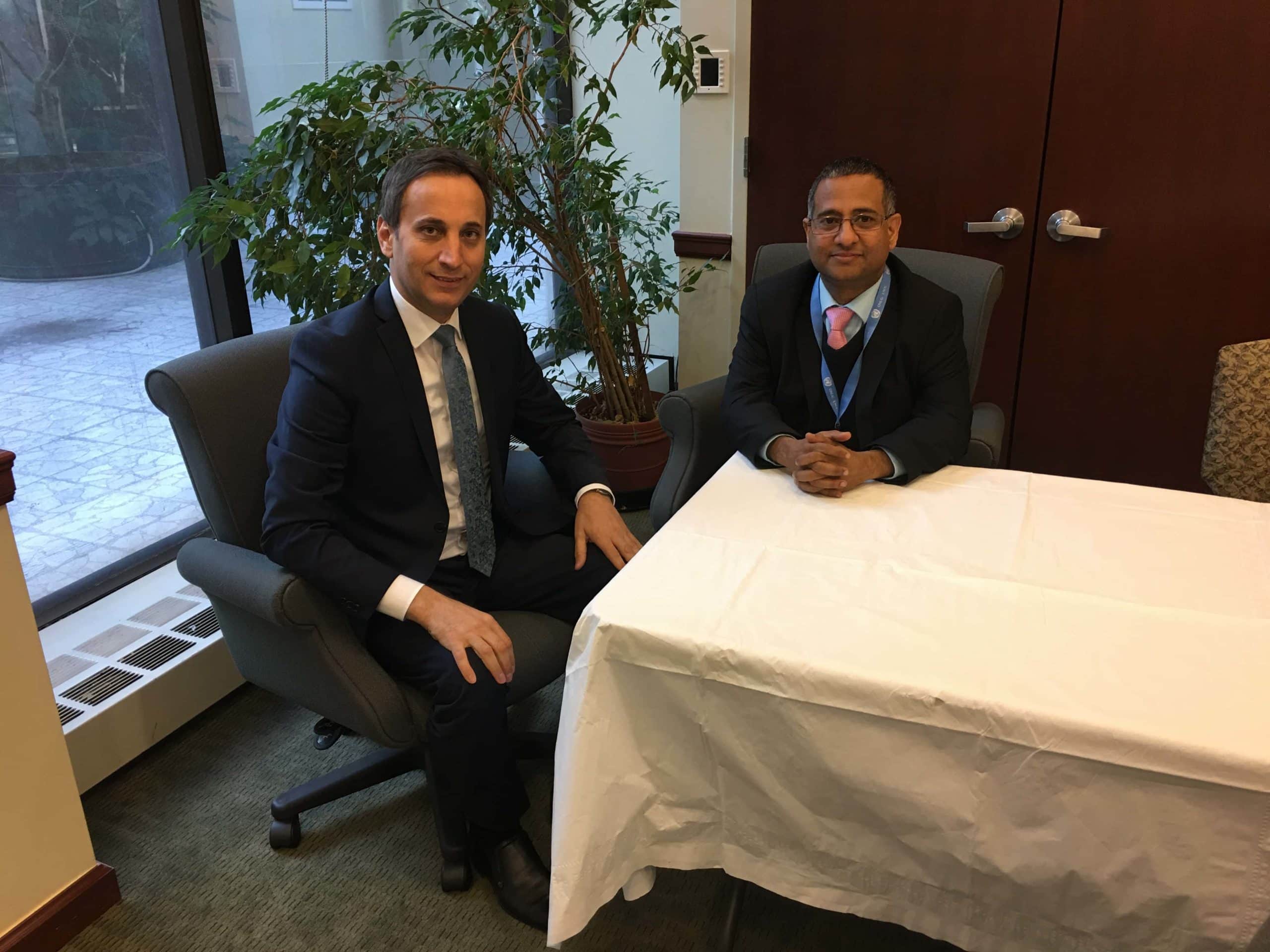 In a recent meeting with the United Nations’ new top envoy for religious freedom, the Seventh-day Adventist Church’s U.N. liaison said Adventists are committed to promoting and defending freedom of worship for all people, regardless of their faith tradition.

Dr. Nelu Burcea, an associate director of the Public Affairs and Religious Liberty department of the world church, met in New York City with Dr. Ahmed Shaheed, who is the U.N.’s new Special Rapporteur on freedom of religion or belief. Dr. Shaheed is a veteran politician and diplomat from the Indian Ocean island nation of Maldives, and previously served as the U.N.’s top human rights observer for the Islamic Republic of Iran. He earned a Ph.D. in International Relations, from the University of Queensland in Australia.

"I welcome the opportunity to work with Dr. Shaheed in promoting the first freedom"

“I have followed Dr. Shaheed’s work as Special Rapporteur on human rights for Iran and I’ve been struck by his passionate commitment to defending the defenseless, and speaking out for those who have no voice,” said Dr. Burcea. “As I talked with him last month, this impression was certainly confirmed. I welcome the opportunity to work with Dr. Shaheed in promoting the first freedom—the freedom to believe and worship according to one’s own conscience.”

In their meeting, Burcea introduced Shaheed to the global work of the Adventist Church, and spoke of its efforts, spanning some 150 years, to defend and expand religious liberty for all people of faith. The two also discussed current challenges to religious freedom in different parts of the world.

Shaheed’s appointment follows the retirement of Professor Heiner Bielefeldt, who served as the U.N.’s Special Rapporteur on freedom of religion or belief since August 2010.

“As he begins his work, Dr. Shaheed will build on a foundation that has been strengthened by the dedicated work of Professor Bielefeldt,” said Dr. Ganoune Diop, director of Public Affairs and Religious Liberty for the world church. Dr. Diop, who formerly served as the church’s U.N. Liaison, has worked closely with Bielefeldt through the years. He called him an “eloquent, effective and compassionate advocate for religious freedom—someone who doesn’t hesitate to speak against the powerful on behalf of religious minorities, or those struggling under repressive laws or in hostile environments. We wish Dr. Shaheed well as he continues to expand Professor Bielefeldt’s legacy.”

As the church’s U.N. Liaison, Burcea regularly travels to the United Nations in New York and Geneva to attend meetings, including sessions of the U.N.’s Human Rights Council, which take place at least three times each year. His task is introducing the Adventist Church within the international arena, and to build good relations with those who share the church’s goals in fields such as human rights and humanitarian care.