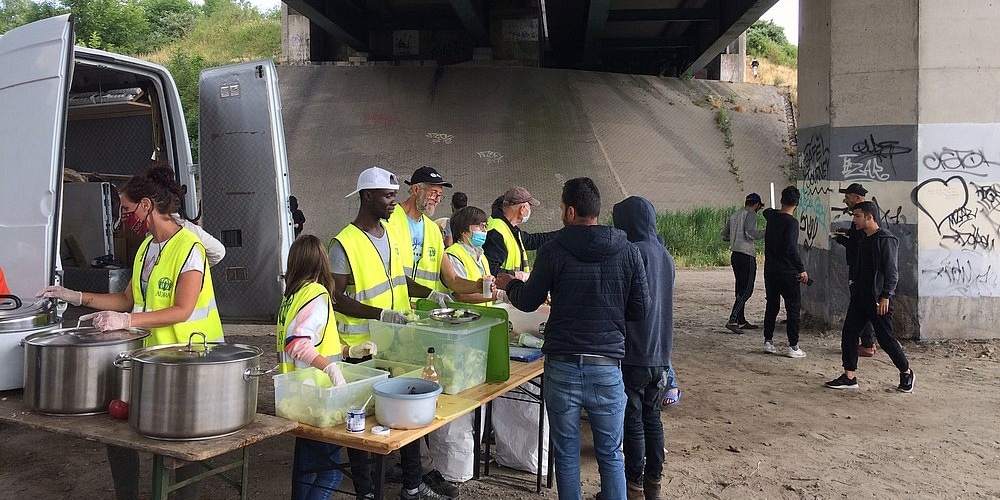 A local chapter of the Adventist Development and Relief Agency (ADRA) in France is continuing to serve food and other provisions in what some people have described as “one of Europe’s worst refugee camps.” ADRA Dunkirk, a local branch of ADRA France, was founded in 2012 to support the increasing number of refugees in the area.

At that time, other humanitarian organizations were assisting refugees, but as they found out that nobody was distributing food on Sundays, ADRA leaders decided to step in. “Right away, we committed to addressing that need,” local ADRA leaders said. They also partnered with other organizations, asking how they could help.

“We were a small Adventist community in Dunkirk, but we decided to act and set up a local [ADRA] branch,” ADRA Dunkirk director Claudette Hannebicque shared. “We organized the first meeting, and we realized that immediate action was needed.” Hannebicque shared how, the following Sunday, ADRA volunteers distributed tea and home-baked dishes, and they kept doing the same for weeks. “We had no funds, but that didn’t stop us,” she said. “We organized fairs and flea markets to fundraise to continue our work.” Later, the nearby city of Grande-Synthe gave ADRA a grant to purchase most of the supplies. “When it comes to cooking gear, repairs of our van, or distribution equipment, we rely on donations,” Hannebicque said.

ADRA Dunkirk assisted other agencies such as Médecins Sans Frontiéres (Doctors Without Borders) to open a humanitarian camp for refugees in 2016. There, the ADRA team worked in partnership with many other associations to improve the living conditions of the exiled. Unfortunately, this camp burned down a year later. Several years later, the situation of refugees is still uncertain, with often substandard living conditions.

Through the years, local governments have dismantled, resettled, and moved these camps around the area. ADRA is committed to going where people are, often under A16 motorway bridges en route to Calais (and then England).

Nearly twenty associations operate within an inter-association group to meet the needs of the refugees. A local town hall has set up water points and dry toilets. Twice a week, an association runs showers. Various associations, including ADRA, still carry out distribution of provisions. “We take care of breakfast on Thursday mornings and cook a hot meal at lunchtime on Sundays,” Hannebicque said. “We also regularly distribute clothes and hygiene products.”

Hannebicque reported that lately, they have received more donations but that refugees keep arriving. “Shoes and warm clothes, for instance, are extremely important items that we always need.”

ADRA has also installed a generator so refugees can recharge their phones, often the only way to keep in touch with their loved ones.

It is estimated that at least 400 refugees are staying around Dunkirk. Many wait for an opportunity to cross to England, either in a truck or on a small boat.

The pandemic has made everything more difficult, Hannebicque reported. “Doctors visit the settlements to take people suspected of having COVID-19 to nearby hospitals,” she shared. “There have been a few cases but not an explosion as some people feared."

Hannebicque said that theirs is a heart-wrenching mission. “We feel helpless,” she said. “We wait for the day when God will put an end to all this suffering.”