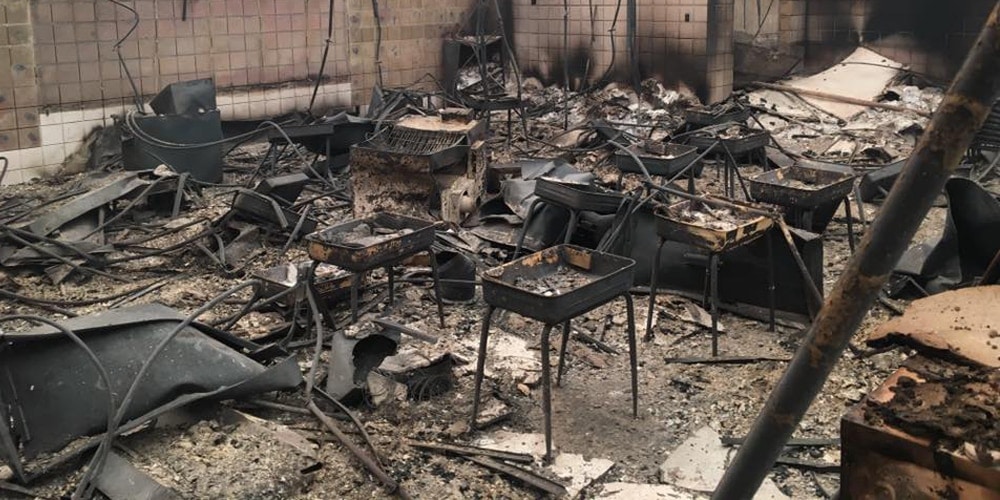 On Monday, Oct. 9, the Tubbs Fire—a wildfire that has burned at least 28,000 acres in Napa and Sonoma counties in Northern California—swept into the Larkfield-Wikiup area of Santa Rosa, California, United States and destroyed Redwood Adventist Academy, located on Mark West Springs Road. No students or faculty were on campus at the time.

For much of Monday, the fate of the K-12 school was unclear. Rumors spread, but no one knew for sure what had happened. Twice during the day, Principal Angie Weems and Northern California Conference associate Education superintendent Albert Miller attempted to visit the property, but they were unable to get through.

Later in the day, Weems’ husband traveled to the area, via backroads, and took photographs of the burned-out school buildings. “It’s a huge loss to look at the pictures and see everything totally gone,” said Weems.

Very early Monday morning, Weems was alerted about the fire that was heading toward Santa Rosa, and decided there was too much uncertainty to hold classes for her 128 students. “I’m so thankful,” she said. “If we’d had to think about getting kids out of there, that would have been tragic.”

The news of the school’s destruction spread through social media and word of mouth to shocked teachers, parents, and students. “It just hit me really hard,” said sophomore Diego Velis. “I’ve spent so many hours at the school and have so many memories.”

Several of the students lost their homes to the fire. Weems had not heard from everyone yet, so she didn’t know the total number. Grades 7/8 teacher Jessie Michel grieves for her students. “I’m just so heartbroken for the kids,” she said.

“If we’d had to think about getting kids out of there, that would have been tragic.”

Founded in 1931, Redwood has played a large role in the local Adventist community. “Some families have had generations attend here—grandparents, parents, and children,” said Weems. “Everybody is going to go through the grieving process in their own way.”

Weems’ immediate goal is to make sure the students don’t lose valuable time. “Our plan now is to have the school open as soon as possible at another temporary location next week,” she said.

The close-knit Redwood school community is supporting each other through this challenging time. “We’re a family, and we’re all really concerned about each other,” said Michel. “It’s sad, but at least we’re not alone. We’re in this together.”

Although the property was insured, there will be other costs for the school and its families. You can help! Make donation at www.purecharity.com/redwood-adventist-academy.

For a bulletin insert/flyer to share in your community, please visit www.nccsda.com/RAA.