Prime Minister Praises the Work of the Adventist Church in St. Vincent 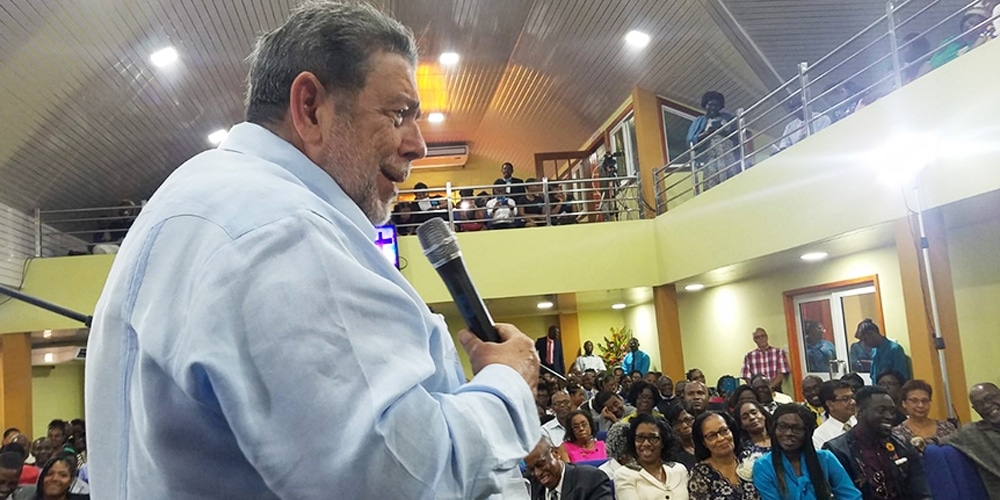 The prime minister of St. Vincent and The Grenadines (SVG) praised the work of the Seventh-day Adventist Church on the islands during the church’s inauguration ceremony of its new headquarters office in Kingstown, St. Vincent, on April 21, 2019.

The Honorable Ralph Gonsalves stressed the church’s contribution to the development of the nation. He particularly praised the dedicated work of the church in education and the nurture in spiritual and moral values.

“When the Seventh-day Adventist Church began in St. Vincent and the Grenadines, those early years saw an eruption of the volcano on the island and prejudice against the church,” Gonsalves said. “But the Adventist Church in SVG was forged in the fire.”

Gonsalves also expressed admiration for the work Adventist pastors carry out and thanked outstanding church members who serve in his government, including his deputy prime minister, Sir Louis Straker, Attorney General Judith Jones-Morgan, and the parliamentary secretary in the Ministry of Education, Deborah Charles.

To accommodate the Adventists who work in the government, Gonsalves ends meetings early on Fridays before sunset and refrains from calling on his deputy prime minister during the hours of the Sabbath, he said. “We ensure we refrain from having national events on Saturdays because in doing so, 13 percent of the population would be excluded.”

More than 15,900 Seventh-day Adventist live in St. Vincent and the Grenadines, a nation that is a string of neighboring islands. The SVG church is organized as a mission field that overseas 42 churches and congregations, a dental clinic, and five primary and secondary schools.

A new facility that will serve as the headquarters of the St. Vincent and the Grenadines Mission was purchased recently from a commercial enterprise through a loan by the Caribbean Union and a sizable donation by a church member donor, local leaders said. The two-floor, renovated facility includes offices, a boardroom, and a large auditorium with two balconies that can seat up to 450 persons, as well as a large basement.

Inter-America Division vice-president James Daniel praised the work of leaders and members who have committed to growing the church since the St. Vincent and the Grenadines Mission offices were established in 2012. Before that year, the islands were part of the church’s East Caribbean Conference territory. According to the “Seventh-day Adventist Encyclopedia,” Adventist presence on the island began in 1895, and the SVG church was organized as part of the West Indies Mission in 1897.

Daniel, who had previously served at the Caribbean Union Conference as coordinator of territorial adjustment and creating new fields, encouraged those gathered to mark the opening of the new facility to remain thankful as he reflected on 1 Thessalonians 5:18: “Give thanks in all circumstances; for this is God’s will for you in Christ Jesus.”

“Your headquarters are located in a significant part of the city and provide for the visibility and image of the church, so thank God for His purpose and His provision here,” Daniel said. “From the building will go out the directions for the church, its ministries to the community, for God has a committed people here.”

St. Vincent and the Grenadines Mission president Dermoth Baptiste shared that the mission headquarters had been functioning in the basement of a church-run dental clinic next door, and now has more room to support the church organization on the islands it oversees. Baptiste, who visits Gonsalves once per quarter to pray for him and his government leaders, said the church will continue to reach out to the communities around it as a center of influence.

Church leaders spoke about plans to renovate the Mission building’s basement to continue to expand its impact in the community in Kingstown and across the islands.

James Daniel contributed to this report.