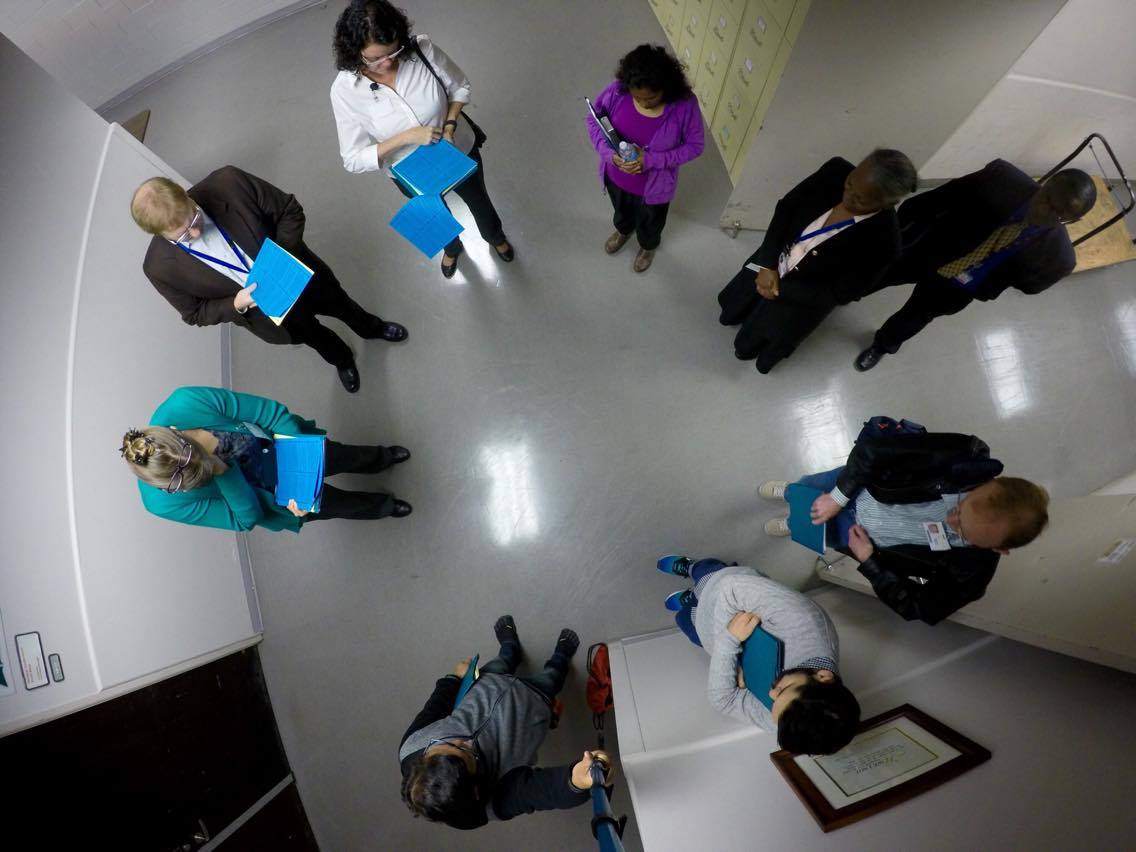 While much of the U.S. state of Maryland slept, nine people gathered at 4 a.m. Monday in the basement of the Seventh-day Adventist world church’s headquarters in Silver Spring.

Members of the group took turns praying for about 15 minutes near a giant mural depicting Jesus and Adventist Church history. After a time of praise and asking God to search their hearts so no sin or compromise would hinder their prayers, the group moved to the offices of the Ellen G. White Estate, where they prayed for White Estate staff members.

The next stop was the Office of Archives, Statistics, and Research, followed by the IT department, and mailroom.

The prayerful walk continued on the second floor: the education department, the youth department, Adventist World Radio, and other entities.

By 6:15 a.m., the group had reached the third floor, where prayers were raised for General Conference president Ted N.C. Wilson, executive secretary G.T. Ng, and each of the vice presidents and division presidents.

“It’s easy to be critical of things that are happening in the church. It’s easy to be critical of decisions that are made,” said Melody Mason, leader of the prayer team, which is part of the world church’s Ministerial Association. “But instead of criticizing, or judging, or throwing stones, what if we were really praying that God would impress our church leaders about the way that He wants them to go?”

That’s the aim of the prayer team, comprised of Adventists from across the United States and abroad, who have been praying for a special outpouring of the Holy Spirit on the church’s Annual Council business meetings since 2010. The prayer team will also manage a prayer room during the Annual Council and related proceedings, which run Oct. 5-12, and will spend hours praying by name for each of the 469 delegates and invitees attending the meetings.

“We are just pleading that God will give wisdom, that He will carry the burdens, and that there will be a genuine and deeper revival and reformation for all of us who work here,” said Mason, who oversees the church’s United in Prayer program and is the author of the best-selling 2014 book Daring to Ask for More: Divine Keys to Answered Prayer. “I believe that God has called people to work here, not just as a job but to make a difference for eternity.”

The prayer team is among several prayer-focused initiatives that are called upon during Annual Council and at other times of the year, said Jerry Page, secretary of the Ministerial Association. A group of women overseen by Janet Page, his wife and associate secretary of the Ministerial Association, prays at the world church headquarters every Tuesday. Stanley Ponniah, a senior accountant, has led a prayer team in the headquarters for about 20 years.

“We have found over the years that when a meeting is covered with much prayer, God is much more able to work,” Jerry Page said.

He credited such prayers with making a major difference at meetings he attended as president of the Adventist Church’s Central California Conference, a position he held prior to being elected as Ministerial Association secretary in 2010. The prayers caused bitterness at those meetings to be replaced with a sweet spirit — and a similar thing has happened at world church headquarters over the past five years, Page said.

“Our goal is to make sure that we have that covering,” Page said. “And if we can get the whole world praying, it would make a real difference.”

Mason likened the efforts of her prayer group to that of the biblical characters Aaron and Hur, who held up the hands of Israelite leader Moses during a fierce battle against the Amalekites. As long as Moses raised his hands, the Israelite army prevailed, according to the account in Exodus 17:8-13. When Moses found it difficult to lift his hands, Aaron and Hur stepped in to hold them up for him.

“I was really convicted from this story that we need to praying more on behalf of our church leaders,” Mason said.

She said this conviction was reinforced by 1 Timothy 2:1-2, which says: “Therefore I exhort first of all that supplications, prayers, intercessions, and giving of thanks be made for all men,for kings and all who are in authority, that we may lead a quiet and peaceable life in all godliness and reverence.”

“I think those who are leading our church have been called by God to positions of authority,” Mason said. Church leaders have told Mason and her coworkers that the prayers are making a difference. Mason recalled several world division leaders approaching her in 2010, the first year of the prayer group, and saying with amazement, “We’ve been coming to meetings here for 15 years, and we have never felt the power of the Holy Spirit like we have this year.”

Department leaders have sensed something special happening in their departments as previously difficult issues were resolved, she said.

“We are praying for two things: that God will take church leaders deeper in their walk with Him and, if they are not walking with God in the way that they should, that God will convict them of their need for Him,” Mason said. “We all can get so busy — I even struggle with this myself — that sometimes we lose that close connection with God. That’s why we need God to revive us daily.”

A female member of the prayer group once paused at 3:45 a.m. during a walk-through of the church headquarters to ask that God awaken any General Conference employees who were not serving Him as they should, Mason said. The woman prayed, “Please get them out of bed and on their knees to plead for the Holy Spirit and that they experience a deeper relationship with you.”

Later that day, the prayer team was stunned to see a post on a church website that read: “At 3:45 a.m. I woke up and was overwhelmingly convicted that I was not walking with God as I should. I got on my knees and confessed my sins and asked for a deeper walk with God. I urge all of you to do the same.”

“When we saw that miracle, we realized that God was giving us a glimpse of how He is working behind the scenes,” Mason said.

Lisa Beardsley-Hardy, education director for the world church, was visibly moved when she learned Monday that the prayer team had prayed outside her office door shortly after she went home at 2 a.m. She was working late as she put final touches on an education-themed LEAD conference that will kick off Annual Council on Wednesday evening.

“I’m touched that someone would stop by and pray while I was just falling asleep at home,” Beardsley-Hardy said. “Prayer is just what we need. … I invite others, especially those who are feeling that there is nothing that they can do, to pray as well.”

Mason said prayer is not only for the eloquent or the talented.

“I used to think if I had this or that position of leadership, I could work for changes to happen in the church,” she said. “But God has convicted me that He has given us the only key that we need — and that is prayer.”

One of her favorite passages about prayer from Ellen White says, “Prayer is a heaven-ordained means of success. Appeals, petitions, entreaties, between man and man, move men, and act as a part in controlling the affairs of nations. But prayer moves heaven” (In Heavenly Places, p. 75).

“It’s easy to complain. It’s easy to judge. It’s easy to tell people how we think things should be done,” Mason said. “But God is really in control. If we will come before His throne and seek His face on behalf of our church and our leaders, imagine what He could do? I pray that more people will be convicted to hold up the arms of our leaders in prayer.”