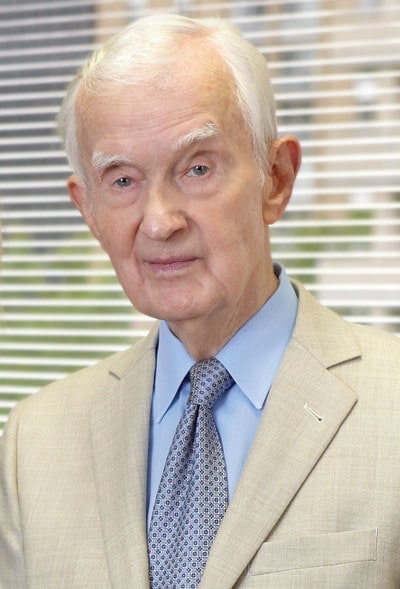 Reprinted With Permission
of the Columbia Union Visitor

Stewart Bainum, founder of Choice Hotels International, the
second-largest hotel chain in the world, died on February 12 following
complications with pneumonia. He was 94. But Bainum wasn’t known only for his
business acumen. A member of Sligo Adventist Church in Takoma Park, Md.,
Bainum was also known for his commitment to Seventh-day Adventist education.

For more than 40 years, the Bainum family has operated the
Commonweal Foundation and donating millions of dollars every year to support
programs and projects that help disadvantaged youth across the country succeed
academically.

“One of our core beliefs at Commonweal Foundation is that, if
you want to go far, you have to have an education. We believe that each
individual has value and potential and deserves a quality learning environment.
Our goal is to provide them with that.” Bainum shared in a 2011 Visitor article
titled “Giving Back.”

Bainum attended two Adventist schools in his formative years. He
was forced to drop out as a student at Mount Vernon Academy (MVA) in Mount
Vernon, Ohio, in the 1930s because he could not pay his tuition. With no real
prospects and only $3 in his pocket, he hitchhiked to Washington, D.C., looking
for work. Once there, he got a job as a plumber’s assistant, making 30 cents an
hour.

After a year and a half in the city, he managed to save enough
money to return and finish his studies at MVA. He continued his education at
what is now Washington Adventist University (WAU) in Takoma Park, Maryland,
ultimately settling in the greater Washington D.C. area.

Due to self-discipline, perseverance, a strong work ethic,
vision and business acumen, Bainum grew more and more successful. He developed
several businesses, including a plumbing and mechanical contracting company,
and got into the apartment and office development industry. In 1951 he founded
the Realty Investment Company, Inc.

After building his first motel in 1957, Bainum joined an
association of independent hotel owners that he would eventually be asked to
run. That association became Choice Hotels International, which is now the
second largest hotel franchise company in the world. He is also the founder of
ManorCare, which in 1998 became part of HCR ManorCare, the nation’s top nursing
home corporation.

Despite his achievements, Bainum never forgot his humble
beginnings. In 1968 he created the College Fund, as it was originally named, as
a means to give back to his community. He provided financially needy students
with loans to help them pay for their college education.

Since then, he has grown the organization’s mission and
objectives, changing not only its name in 1985 to the Commonweal Foundation,
but also shifting its focus to support disadvantaged youth currently enrolled
in secondary education.

The catalyst for this change came in 1988 when Commonweal was a
key supporter of the “I Have a Dream” Program. Stewart agreed to pay the college
tuition of 67 seventh-graders at Kramer Junior High School in Washington, D.C.,
if they finished high school. The results were spectacular! Nearly 75 percent
of the 67 “Dreamers,” as they were called, graduated high school, compared to
only 27 percent of their peers. In addition, of the 10 that Stewart sent to his
alma mater, Mount Vernon Academy, nine graduated.

From this experience, he developed Commonweal’s Pathways to
Success Program (PSP), through which he continues to provide low-income middle
and high school students with scholarships to attend private, faith-based
boarding and day schools selected by Commonweal.

“Both of my parents grew up in poverty,” explains Barbara,
Bainum’s daughter and his successor at Commonweal, and also a Sligo church member.
“Having the opportunity to go to boarding school, they really felt that it
changed their lives … this had an immense impact on how the focus of the
foundation has evolved.”

Through Commonweal, the Bainums also provide schools with the
resources they need to help students reach their potential, in the form of
grants and multi-year service contracts. Some of this assistance has gone to
meet school needs, including staffing shortfalls, staff training and
development, and facility renovation.

Since Commonweal’s inception, the Bainum family has given
thousands of scholarships to needy students, and they partner with, on average,
approximately 39 schools each year, more than half of which are Seventh-day
Adventist.

In addition to the PSP, Commonweal’s other programs help
supplement and improve students’ chances of academic success. Through the
Learning Support Program and Partners in Learning Program, students between
kindergarten and 12th grade can get free tutoring to help improve their
literacy rates and math skills.

Through the Grants Program, Commonweal staff manages the
financial assistance they provide their partners. One such grant allows them to
target community-based organizations focused on youth development; another empowers
staff at PSP partner schools to get the training and technical assistance they
need to increase student achievement.

The Commonweal Foundation continues to grow, and the family
behind it remains dedicated to helping its students and partners succeed. As a
matter of fact, says Barbara, the growth and development of their students and
partnering organizations is essential to the foundation’s success. “As we move
forward, our intent will be to be much more involved with our schools,” she
explains. “I am gratified to lead the Commonweal Foundation, knowing that the
work that we do embodies what my father wants to give back to his church and
community.”

Portions of this article were reprinted from “Giving Back,”
a November 2011 Visitor magazine article. Click here to read the
article in its original format.