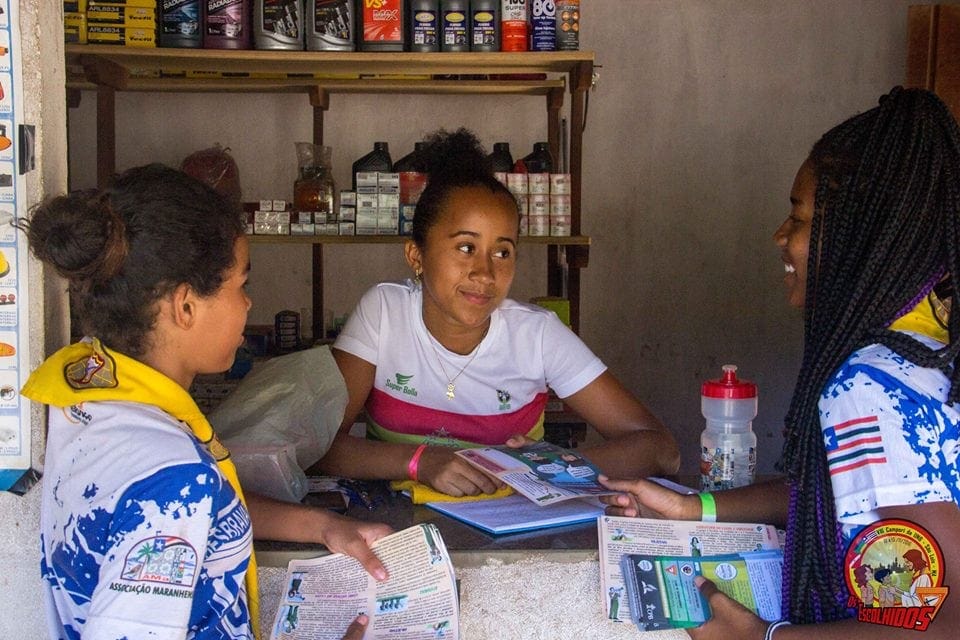 Thousands of residents of São Luís, a city of 1 million in the northeastern Brazilian state of Maranhão, got an up-close look at Seventh-day Adventists when young Pathfinders blanketed the city with health pamphlets. The outreach, held on Nov. 11, was part of the eighth Camporee held in the region, an event called “The Chosen,” which drew 18,000 participants.

Besides social and missionary activities, Pathfinders are also proving that they are good artists.

Before hitting the streets and byways, the Pathfinders heard a message based on the biblical account of Joseph from Pastor Rafael Santos. The message, and the subsequent community visitation, emphasized that while Pathfinders enjoy camping, it is serving others in the community with education, fundraising to aid those in need, and organizing blood donation drives that are key motivations for Pathfinder service.

Service in the community

Edmilson Cavalcante, chaplain of one of the Pathfinder groups from Pará, considers activities that raise community awareness as very important. “We feel that the [Adventist] Church is concerned not only with their spiritual life, but also with people’s health. And we feel rewarded,” he says.

Besides social and missionary activities, Pathfinders are also proving that they are good artists. The Georgina Gymnasium, better known as the Castelinho, hosted an exposition of arts and crafts made by the youngsters: Decorated pens and bottles, handmade covers for Bibles and notebooks, crochet, keychains with Pathfinder symbols, towels, among other products.

The Exodus Club chose to develop a photography exhibit with pictures of landscapes, flowers, and other natural elements. They also illustrated the beginning of photography and of its founder, photographer Joseph Nicéphore Niépce, showing a little about the history of photojournalism in Brazil.

Pathfinder Bruna Gabriele, from Santa Luzia, Maranhão, was one of the exhibitors that that helped sell her club’s artwork. “My club made keychains. We sold them and were able to pay for many of our expenses. It was really worth it,” she said.

At the evening worship service, 140 pathfinders were baptized. District pastors were also honored and received a special emblem in recognition of the work that they do alongside the clubs.

When a group of 18,000 assemble in a community, it’s certain to draw the attention of local leaders

When a group of 18,000 assemble in a community, it’s certain to draw the attention of local leaders, and this event was no exception. State governor Flávio Dino sent social development secretary Neto Evangelista to the Camporee, and the secretary told the gathering he was impressed.

“I confess that I was surprised when I got out of the car and saw that multitude,” Evangelista said. “It gave me chills. The state has the responsibility of caring for people, and when we find something like this, the state has the obligation of being a partner and a helper,” he said.

State representative Marco Aurélio — who worked with government officials to bring the event to São Luís — had a personal stake in the Camporee. Aurélio was a Pathfinder in his youth, and credits his professional education and the development of his character to what he learned in the program.

“I still remember the [Pathfinder] Pledge and the Law. I do not forget to use what I learned, for example, to try to ‘keep the level eye’. I always try to ‘do my honest part’ in my work and ‘go on God’s errands’,” Rep. Aurélio told the group.

With additional reporting from Gleyciane França and Silvio de Oliveira