Over 2,000 Will Be Baptized in Lake Nicaragua This Weekend 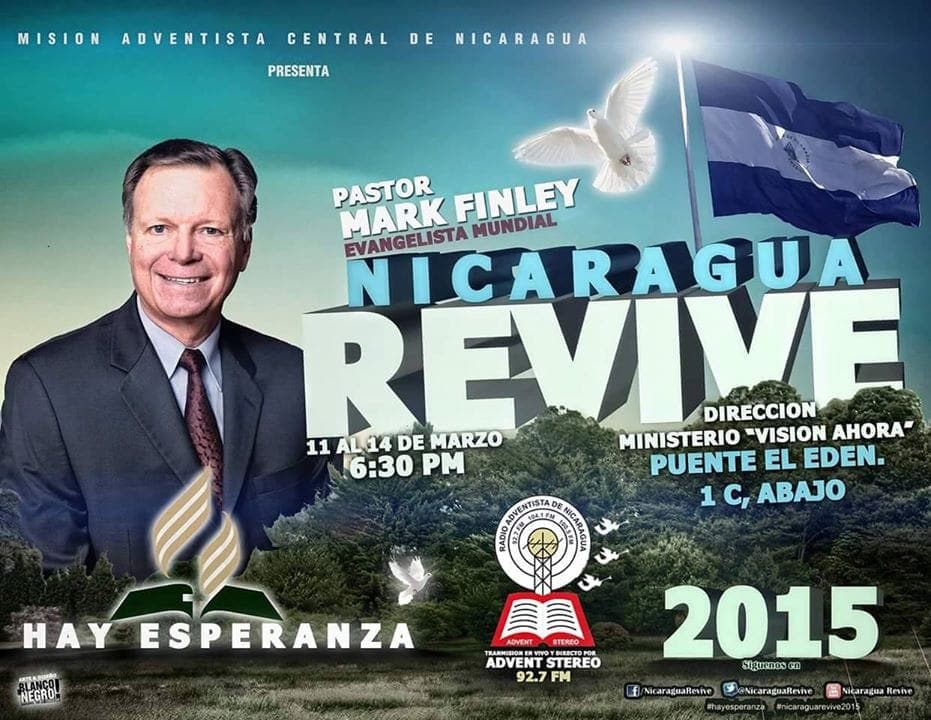 The Seventh-day Adventist Church is wrapping up its first major evangelistic campaign in Nicaragua with four days of meetings by evangelist Mark Finley that will culminate with the mass baptism of more than 2,000 people in a lake this weekend.

Finley opened his meetings on Wednesday night to a packed hall of more than 3,000 people, most of them non-Adventists, in Managua, the capital of the Central American country.

About 2,200 people filled the Ministerio Vision Ahora Auditorium, while an additional 500 sat outside and more than 300 stood. Dozens of people responded to a call for baptism at the end of the presentation.

“As I observe what is happening in Inter-America, my deep conviction is that when the church is united, focused on mission, and committed to the ministry of Christ, God blesses in unusual ways and amazing things happen to advance His kingdom,” Finley told the
Adventist Review.

Finley’s meetings are being broadcast live on the radio and Internet to sites around the country and in Costa Rica, which borders Nicaragua to the south and is also part of the Adventist Church’s Inter-American Division.

More than 2,000 people are expected to be baptized on Sunday morning in the fresh water of Lake Nicaragua, Central America’s largest lake, in the city of Grenada, located an hour’s drive from the capital, Managua. Among the Adventist leaders who will attend the baptism are Ted N.C. Wilson, president of the Adventist world church, and Israel Leito, president of the Inter-American Division.

The baptisms will cap an initiative that began more than a year ago with the formation of about 5,000 small groups in Nicaragua and Costa Rica to study “Creation Health” materials produced by Adventist-operated Florida Hospital. “Creation Health” bills itself as a faith-based wellness plan for people who want to live healthier and happier lives.

“The message of physical, mental, and spiritual health broke down barriers and produced positive benefits in people's lives,” said Finley, an editor-at-large for the
Adventist Review.

Watch the news report on Nicaragua's Televisa Canal 6 about Mark Finley's evangelistic series in the country. The report begins with a group of Adventist women in national dress welcoming Finley at the airport. Note: The report is mostly in Spanish.

Church members prepared for Finley’s meetings, titled, “Nicaragua Revive, Esperanza,” by holding marches and passing out flyers. The meetings have also received a boost from the national media. The national television station, Televisa Canal 6, interviewed Finley when he arrived Tuesday at the Augusto C. Sandino International Airport and featured his meetings on the evening news on Wednesday. Journalists from two television and three radio stations attended a news conference with Finley on Wednesday afternoon.

“This is the first time that Nicaragua has held such a large evangelistic program,” said Gloria Padilla, communication director for the South Central American Union, which oversees the Adventist Church in Nicaragua and Costa Rica. “We praise God for His leading here.”