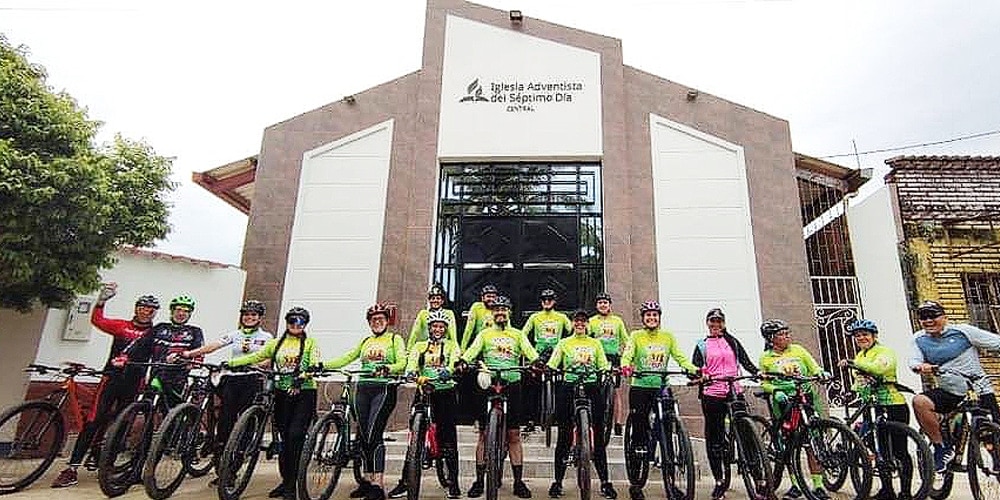 A couple in southern Colombia were baptized recently after surviving COVID-19 and joining a cycling club with other church members. Roger Herrera and Erika Gordillo, from Vistahermosa, Meta, said that as they fought the virus, they feared they would succumb to the disease before accepting Jesus. “Our greatest fear was to die before surrendering our hearts to God through baptism,” they said.

While they were sick, they kept praying, asking the Lord to help them recover. “We promised God that we would give our lives to Him as soon as we recovered,” they shared.

The couple said that they were already acquainted with the Adventist message. “I used to be a Seventh-day Adventist,” Roger said, “but due to economic hardship, I moved to another city where they asked me to work Saturdays. I eventually moved away from God.”

When the Herreras returned to Vistahermosa, however, they were drawn to the “I Want to Live Healthy” church initiative that included a bicycle club. In Colombia, cycling clubs are well known, particularly among church members who advocate for healthy lifestyle habits. The “I Want to Live Healthy” initiative, which is popular throughout the Inter-American Division region, has been well accepted among church members and others interested in good nutrition and natural remedies for a healthier life.

After a painful recovery process, the couple felt the need to set things right with God and try to live a healthier life. “It was difficult because breathing normally was hard,” Roger said. “It was a long road.”

Throughout the ordeal, Roger said, he felt a need to change his life habits and develop a closer relationship with God once more.

As soon as they felt stronger physically, the Herreras accepted an invitation to go cycling.

“We began to go cycling with the ‘I Want to Live Healthy’ club,” Roger said. “As we cycled by beautiful landscapes and rivers, I was told I could be baptized right there. And when I got COVID-19, I asked myself why I had not made a decision. I asked God to give me the opportunity of surrendering my life, because I felt the need to make amends with God and get closer to Him.”

The Herreras finally were baptized on May 22 in Vistahermosa.

Roger credits the role of the bicycle club in helping him and his wife come closer to God. “Those who wish to belong to the club will find spiritual and physical strength,” he said. “Club members provide spiritual support amid difficult times. We are glad we find ways of having fun and sharing as we enjoy nature. Having good company and spiritual support is wonderful.”

The Llanos Orientales Cycling Club includes 110 active members in the area. Its members form a group of people who love the Lord and sports and who want to keep being witnesses of God's love, organizers reported. They are working to offer a health expo and inviting other cyclists to join them to learn about healthy living.

Leaders also explained that health programs and initiatives in the region are positive developments amid the current COVID-19 pandemic, which in Colombia has so far infected close to 3.9 million people and resulted in almost 98,000 deaths, with many ICU facilities fully occupied across the nation.