Ordination Study Concludes with Suggestions for “The Way Forward” 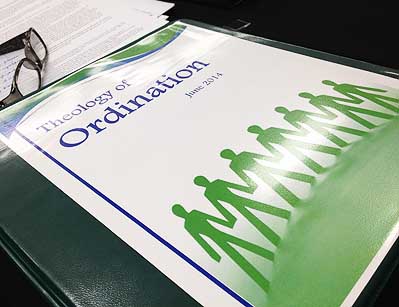 Leaders and members of the
Adventist Church’s Theology of Ordination Study Committee (TOSC) wondered aloud
if the fourth and last multi-day session of the group would yield a consensus
on the thorny issue of ordaining women to ministry.

One TOSC member wistfully noted to
the group that Wednesday, June 4, was Pentecost in the Jewish calendar. He hoped, he said, that a miracle of
unanimity might conclude the two-year study process as members were asked to
choose their preferred solution, or “Way Forward,” on the issue the church has
wrestled with for more than 25 years.

However, when TOSC chairman Artur
Stele announced the results of an informal survey of the group of scholars,
church administrators, pastors and laypersons, three positions emerged from the
data, with no position claiming a majority of the 95 votes received.[1]

Forty TOSC members identified as
their first choice a position that “Each
entity responsible for calling pastors be authorized to choose either to have
only men as ordained pastors; or to have both men and women as ordained
pastors."

Thirty-two members favored a proposal that affirms the
"practice of ordaining/commissioning only qualified men to the office
of pastor/minister throughout the world church . . ..”

A third option was the first choice
of 22 participants. It stated, “Christ
is the only head of the church,” noting that there is a “biblical pattern of male leadership, under the headship of Christ, in
the office of the ordained minister.” But this option also added that “We recommend that denominational leadership
at a proper level be authorized to decide, based on biblical principles,
whether such an adaptation [permission to ordain both men and women] may be
appropriate for their area or region.”

General Conference president Ted N.
C. Wilson spoke to committee members after the poll results were announced by
Stele. “As we move forward with this
process, I’m asking that we each act with humility—not authoritatively or in an
overbearing manner,” Wilson urged. “We
should do all things in the spirit of Jesus.”

Wilson also thanked participants
for an action they voted unanimously earlier in the day. TOSC members acted “to affirm that in spite of
the differences of opinion on the subject of women’s ordination, the members of
the Theology of Ordination Study Committee are committed to the message and
mission of the Seventh-day Adventist Church, as expressed through the 28
Fundamental Beliefs.”

“We will be very open and fair in
the way we approach the handling of this matter,” Wilson assured the committee
as he sketched key stages the church will follow in the months ahead.

Several administrative groups at
the church’s world headquarters will consider the written report of the TOSC
process during meetings June 16-19, Wilson said, and will place the matter on
the agenda of the denomination’s Annual Council convening in Silver Spring,
Maryland, October 9-14. General
Conference leaders have promised to make all materials from the recent study
process and supplemental documents available in advance to the 300+ member Executive
Committee, which decides what to recommend to the church’s quinquennial General
Conference session planned for San Antonio, Texas, 13 months from now.

Wilson said that multiple
presentations will be made at the scheduled administrative meetings as part of
helping church representatives openly review the subject.

“The results of today’s poll shouldn’t dictate
any outcomes for the world church, but they should be given their appropriate
weight,” said TOSC vice chair Geoffrey Mbwana, also a vice-president of the
church. “No one should quickly say,
‘This is all a clear matter.’ All that
is really clear at this moment is that we have strong differences about the
matter of ordaining women to ministry. ”TOSC leaders saw the survey as an evaluation tool to determine if
consensus had developed in the committee, which the results showed had not happened.

The TOSC group’s assignment was to
do an in-depth study and analysis of the subject of ordination with input from
world divisions of the church: the committee wasn’t organized to be proportionately
representative of the world church. A
more international assessment will come in the process at the 2014 Annual
Council and 2015 General Conference sessions when delegates selected by church
constitutional and policy provisions will consider the issue.

Karen Porter, TOSC Secretary and
assistant secretary of the world church, underlined the value of the study.

“What we’ve
experienced here could be an important template for the world church as it
considers other international issues,” Porter said. “We’ve learned lessons of both kinds—what
works, and what doesn’t—and we’re all better for having spent so many days and
hours listening to people we may not always agree with.”

Stele also praised the spirit of
committee members as the 24-month study process concluded. He suggested that the fourth session had
probably been more positive because of the greater amount of time spent in
caucuses and working groups instead of plenary presentations.

“Though we’ve had challenging and
difficult discussions at times, we’ve developed a camaraderie—a respect for
each other—during the last two years,” he said. “A large majority of participants learned to trust each other as they
prayed together, ate meals together, and talked in the hallways. This is the first truly global study process
on this issue that has ever been attempted. It’s been gratifying to see and feel how much this unique process has
built up mutual understanding and better relationships.”

Lisa Beardsley-Hardy, director of
the Adventist Church’s education department and a TOSC member, focused on the
long-term gain to the church from the study process. “One of the most important developments for
us as a global, multi-national church was to revisit our hermeneutics, and
think about how we study the Bible across many cultures,” she told Adventist Review. “This experience helped us to clarify what we
believe—and why we believe it, as well as focusing us on how we unitedly pursue
our mission.”

As the Wednesday session ended,
Wilson urged committee members to keep the mission of the church in focus. He said, “We may not yet see just where the
Spirit is taking us on this issue, but we firmly believe that God will open the
way for His church to fulfill its mission of proclaiming the three angels’
messages to the world.”

[1]The
full TOSC membership was 106 persons.