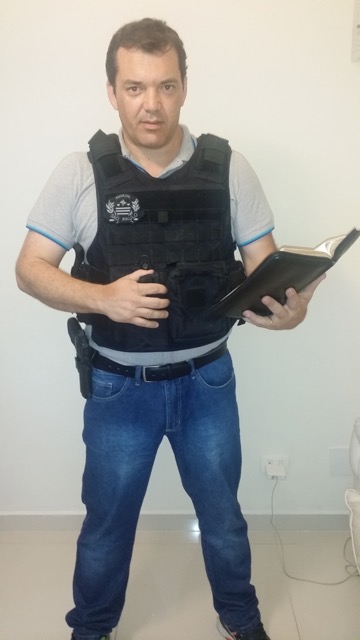 Roberto Roberti had seen a lot in his nearly two decades on the Brazilian police force.

But nothing scared him until he received a gift DVD of a Seventh-day Adventist evangelist and strange things started happening in his life. His wife’s cell phone rang without a SIM card inside. The DVD player wouldn’t work when he tried to watch an Adventist evangelist. When the player did work, Roberti inexplicably grew drowsy and fell asleep.

“I think I never read one page of the Bible in my 30 years in the Roman Catholic Church, but odd things happened when I received the DVD and opened the Bible for the first time,” said Roberti, 42.

The unexplained happenings only compelled him to study more, and he was baptized into the Seventh-day Adventist Church.

Today Roberti continues to serve on the police force, acting as a bodyguard to Aldo Galiano, police chief of the São Paulo suburbs of São Bernardo do Campo and São Caetano. But he spends every free moment on Facebook, responding to users’ queries on the Facebook page of the Adventist Church’s South American Division. As a result of his work, 45 people have been baptized in the past nine months.

Roberti’s life was turned upside-down in 2010 after his brother-in-law presented him and his wife with the DVD by Luís Gonçalves, a prominent South American evangelist. Initially uninterested, Roberti put the DVD on a shelf and forgot about it. Although he belonged to the Catholic Church, he did not attend mass and often accompanied his wife to the church of another denomination on Sundays.

It was during Sunday services that his wife’s cell phone abruptly began to ring, Roberti said.

His wife pulled the cell phone out of her purse, her faced filled with surprise and fear.

“It’s my brother,” she said to her husband.

Her expression of horror deepened.

“The cell phone doesn’t have a SIM card inside,” she stammered.

It was Roberti turned to be scared.

“Then don’t answer it!” he exclaimed.

The couple waited until the phone stopped ringing.

“I was scared because how could anyone call without a SIM card?” Roberti said in an interview.

A few weeks later, Roberti and her wife were returning home from a Saturday night concert when the wife’s cell phone began to ring at 1:30 a.m. This time the cell phone contained a SIM card.

The wife saw on the display that her brother was calling again, but she couldn’t get the phone to accept the call. Eventually the phone stopped ringing.

When she called her brother back moments later, he groggily said that he had been asleep and hadn’t tried to call her.

“Again we were afraid,” Roberti said. “At that time I didn’t understand what was going on. But now I understand that God was calling on me to pay attention to things that I wasn’t paying attention to at that time.”

Roberti’s brother-in-law had been urging the couple to watch the DVD, and he only increased his requests when he heard about the phone calls, Roberti said.

After the second phone call, Roberti and his wife sat down to watch the DVD.

“I would just fall asleep while watching the DVD,” he said. “Suddenly I was just too tired to keep watching. I just fall sleep even if I hadn’t been sleepy before I sat down. My wife had to poke me to wake up.”

The odd events spurred Roberti and his wife to make it through the DVD. They were fascinated with what they heard about the prophecies of Daniel and Revelation, and they wanted to learn more. Subsequent Bible studies with an Adventist pastor led them to baptism in December 2010 — much to the delight of Roberti’s brother-in-law.

Roberti, the father of a 3-year-old girl, an 8-year-old boy, and a 12-year-old girl, said the odd occurrences have now been replaced with other unusual — but providential — happenings. Chief among them: He has no Sabbath conflicts as a police officer. Roberto, a 22-year police veteran, essentially is on call six days a week. But the police chief allows him to observe the Sabbath from sundown Friday to sundown Saturday.

Another unusual happening is Roberti’s work with the Portuguese-language Facebook page of the South American Division. His work of simply responding to users’ comments puts him on the frontlines of what he views as a largely untapped goldfield for Christ. He replies when people leave messages and, if they show interest in more information, he offers Bible studies by e-mail.

Nearly 200 people have been baptized through the combined work of Roberti and three other Facebook volunteers since he started the volunteer job in January 2015. Roberti is now training 20 new volunteers — all people who were baptized after posting questions on Facebook — to join the Facebook team.

Reflecting on unusual turns that his life has taken since 2010, Roberti had only one thing to say: “Praise the Lord!”

Profile
Media Ministry Is Transforming Lives in Fiji
Despite lockdowns and restrictions, more than 600 have been baptized in 2021.
News
Church Media Experts Focus on Mission at Annual GAiN Conference in Korea 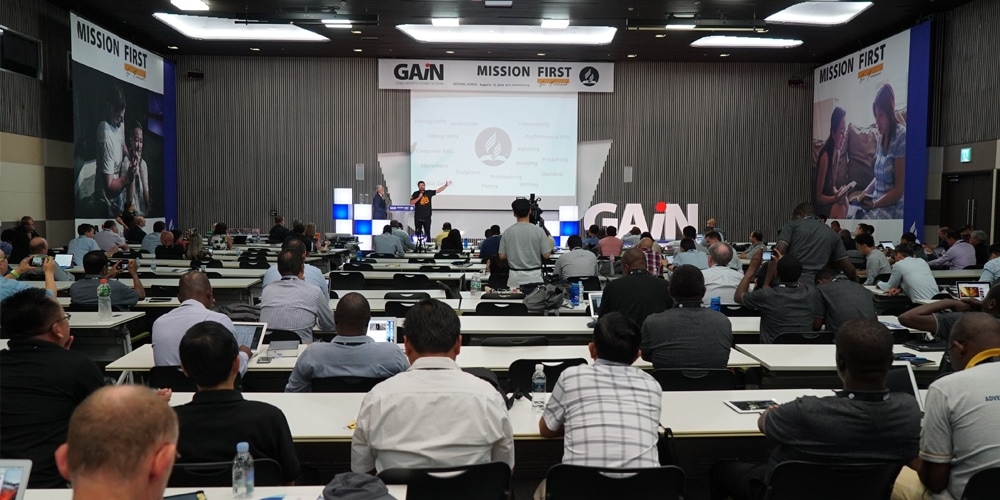