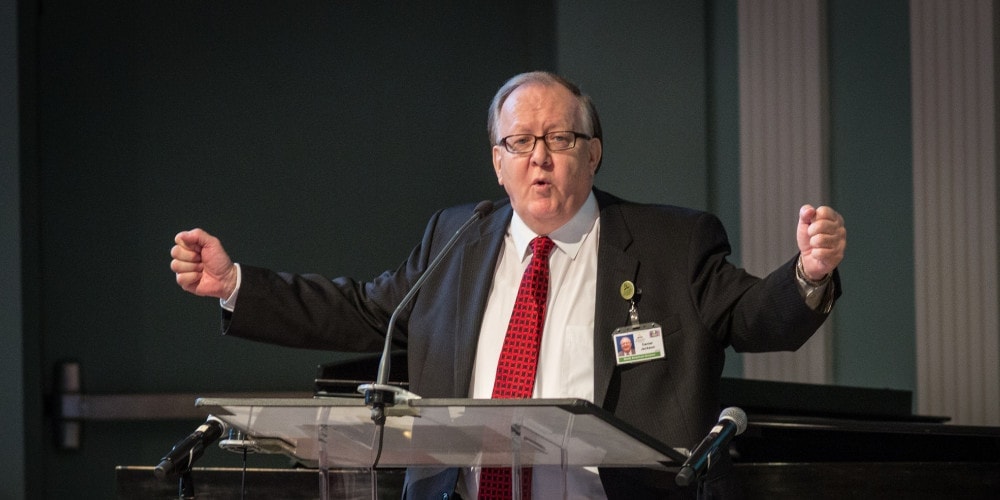 Daniel R. Jackson, president of the Seventh-day Adventist Church’s North American Division, has presented 11 goals that the division will pursue over the next five years, including 1,000 new congregations and the active involvement of every one of its 1.2 million church members in “growing the kingdom of God.”

Jackson spoke Thursday at the opening of the division’s weeklong year-end meetings, themed “The Grand Collaboration,” at its headquarters in Silver Spring, Maryland.

Members of the division’s executive committee, special guests, and presenters are attending a series of business meetings, devotionals, and worship services that will determine the direction of the division for the next five years.

Jackson called for a sense of unity in the mission of the church as he started the morning business session with the president’s report focusing on his “11 Dreams for the Division.”

“Either we are one, or we are a disgrace to the name of Jesus,” Jackson said. “We are stronger when we work as a team.”

After reminding executive committee members that “The Grand Collaboration” is all about placing their hands in the hand of God and allowing Him to lead and shape them, Jackson outlined his vision for the division as 11 strategic goals:

After Jackson spoke, division secretary G. Alexander Bryant presented his secretary’s report with the latest statistics, including 1,206,885 church members, 5,472 churches and 840 companies as of July 2015. The rate of growth for 2014 was 1.43 percent, with an average of 98 people joining the church daily.

Worldwide, 33 million people have joined the Adventist Church over the past 50 years, but 13 million have left, representing a net loss of 39.25 percent, according to the Adventist world church’s Office of Archives, Statistics, and Research.

Several executive committee members went to the microphones to share their concern over the North American Division figures, and the entire committee joined in corporate prayer, asking for God’s guidance in finding ways to reach those who have decided to leave the church.

Also Thursday, Elden Ramirez, director of the division’s Office of Volunteer Ministries, gave a brief presentation of the roles that Adventist volunteers play in the mission of the church. So far this year 49,632 people from the division have participated in short-term volunteer projects around the world. Currently division volunteers represent 46 percent of the people serving on short-term mission projects worldwide.

PowerPoint copies of the president’s and secretary’s reports can be found at the links below: