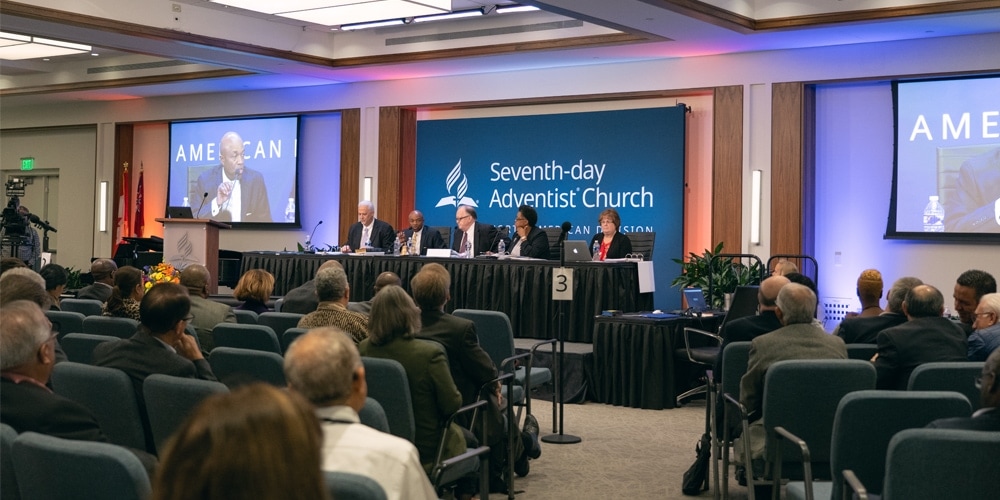 The first order of business on Friday, November 1, 2019, for day two of the North American Division (NAD) Year-End Meetings (YEM) in Columbia, Maryland, United States, was delivering a report from the nominating committee regarding three positions: a vice president for ministries, an undertreasurer, and a director of stewardship ministries.

“Being voted for a position anywhere in God’s work — if you were just voted as a communication director for your local church — that’s a call from God,” said Daniel Jackson, president of the North American Division, before names were presented to the division’s executive committee. “We’re talking about God’s business here, not human business. The biggest mistake we make is when we try to make it human business. And that’s where we run astray.”

“This is not just an ‘ol’ boys league.’ It seems like that to me sometimes,” Jackson continued. “But the fact is, to find people who have skills, willingness, and who are spiritual people foundationally is quite a task. It’s more difficult than it appears.”

During this portion of the business session, Bonita Shields was elected as vice president of the North American Division for ministries. Shields is currently the director of NAD Stewardship Ministries, a position in which she was elected to serve last year as the first woman to occupy that role. Shields replaces Debra Brill, who retired from the position in September.

Judy Glass was elected to serve the division as its undertreasurer, in a role that helps manage the division’s budget and oversees the day-to-day operations of the NAD treasury and its staff. She will replace Michael Jamieson, who is set to retire late next month. Glass is the chief financial officer of AdventSource, where she has worked for ten years. According to Brad Forbes, president of AdventSource, Glass led the ministry to pay off its debt and purchase a building, among many other accomplishments.

“It’s with tears and reliance on the providence of God, that He will provide, that I second this motion,” said Forbes, after Glass’s name was presented to the delegates.

With Shields tapped to serve as a new vice president for the division, Michael Harpe was elected to serve as director of NAD Stewardship Ministries. For 13 years, he’s worked for the South Central Conference in various ministries, including planned giving and trust services, communication, stewardship, and Adventist Laymen’s Services and Industries (ASi).

James Black, director of prayer ministries, affirmed the vote by the executive committee. “On behalf of ministries directors of the building — we knew we were at a point of a major transition, none of us knew how this would play out. I have a really good feeling about the nominating committee having prayed for guidance and direction on the persons who will replace Debra Brill and Mike Jamieson.”

“You have to have a relationship and respect for those who you serve, and certainly you’ve given us two that make it easy to do that,” Black said.

The report from Multilingual and Emerging Immigrant Ministries featured presentations from the leader of Adventist Muslim Relations Gabriela Profeta Phillips, who shared a story of local Adventist and Muslim women who operate a business that sews and sells purses. When the Adventists in the business asked Phillips how they could explain why they would not sell their items on the Sabbath, Phillips pointed out verses from the Qur’an that support Sabbath observance as a way to find common ground for the women representing the two religions.

Terri Saelee, director of Adventist Refugee and Immigrant Ministries, added to the report by acknowledging the ten-year anniversary of the ministry. Over the decade, the number of refugee congregations has grown from 57 to 175, and membership has increased from 2,087 to 9,960.

In addition, Saelee shared how the Adventist Church is reaching language groups that are rarely reached in the NAD territory and around the world, from the South Atlantic Conference organizing the first Adventist church for Nepali Bhutanese-speaking refugees in Greensboro, North Carolina; to Adventist South Sudanese refugee young adults translating the Sabbath School adult Bible study guide into Nuer; to Bemnet Meried, an Eritrean refugee and doctor, ministering to Tigrinya-speaking people around the world as the division’s only Eritrean Bible worker. Further, NAD consultants for the language groups have been asked to help launch new work in Australia, Southeast Asia, Africa, and even on islands that are off-limits to missionaries, according to Saelee.

“The success of this work is surprising yet predictable, because we are working on a success plan that was given to us by divine revelation,” Saelee said.

While Saelee celebrated the ministry’s accomplishments, she did not shy away from the fact that 100 language groups related to refugee and immigrant communities are still unreached by the North American Division.

“No one has the right to hear the gospel message twice until everyone has heard it once,” Saelee said, quoting Oswald Smith. “What would it look like to reach those 100 groups? I believe His biddings are enablings.”

Tony Anobile, NAD vice president for multilingual ministries, concluded the report with a follow-up of an announcement made at last year’s Year-End Meeting about a resource for small group ministries. The “GPS” kits (Healthy Small Groups) entitled “VIDA” were distributed to 8,000 laypeople and 500 pastors located in 31 cities, 21 states, and six unions in preparation for a national small-group online broadcast in April. Somewhere between 17,000 and 23,000 small groups connected to the broadcast via YouTube.

In addition, the “GPS” kit, which was previously only available in Spanish, has been translated into English and will be available from AdventSource.

The next major event relating to small groups will take place in October 2020 with an emphasis on young adults. The “Discover Your Purpose” caravan will take place over eight days in 10 cities across the United States.

“They want to create a moment to engage our young adults, to have them recognize how valuable they are to the church and how much we need them and how much they need to be engaged with the church as well,” Anobile said.

Additional reports were given from Adventist Chaplaincy Ministries on the status of its 713 NAD-endorsed chaplains; education leaders on the ways Adventist education transforms lives; and Adventist Review Ministries on how it is distributing innovative content through print, audio, virtual reality, and video productions.

A couple of hours after the conclusion of the business session, delegates, their families, and community members were invited to attend the 4th annual Transformational Evangelism vespers program, which was co-hosted by Kenneth Denslow, assistant to the president of the North American Division, and José Cortes Jr., an associate director of the NAD Ministerial Association.

The program featured live testimonies and video presentations of practical and creative ways that ministries, churches, schools, and volunteers are serving their communities. Attendees heard a variety of stories, including an elementary school’s student-led evangelism series in Michigan; a church revitalization endeavor for the oldest Adventist church in Arkansas; and volunteer missions in remote Native American villages in Alaska.

In the middle of the program, Denslow introduced Garrison Chaffee, pastor of the Paradise, California, Seventh-day Adventist church. Chaffee shared how the church and the city of Paradise are continuing their recovery from the devastating fires that destroyed homes and various structures in the area, including the church’s building, in November 2018.

“Within a day or two after the fire, sister churches and schools, friends, and friends-of-friends showed up with trailer-loads of water and truckloads of clothing and food,” Chaffee said. “In the midst of smoke, and not sure if our homes made it, we started giving [all of] it out. It was such a blessing.”

Members continued to help their community by distributing potable water since the town’s water supply was contaminated. They also assembled and shared “home kits” to help their neighbors re-establish their homes.

“We just try to love on our town and try to encourage volunteerism, beautification, and community service,” Chaffee said.

The church is now partnering with Maranatha Volunteers International to help build 200 sheds over a three-week period for community members who need a dry and secure location to store personal belongings as the region prepares for winter.

“We can’t fix everything that happened in Paradise, but we can help 200 families be able to secure their belongings during the winter ahead,” Denslow said.

It was reported that a total of approximately US$7,500 dollars was collected for the project from delegates and guests during the vespers and Sabbath afternoon programs.