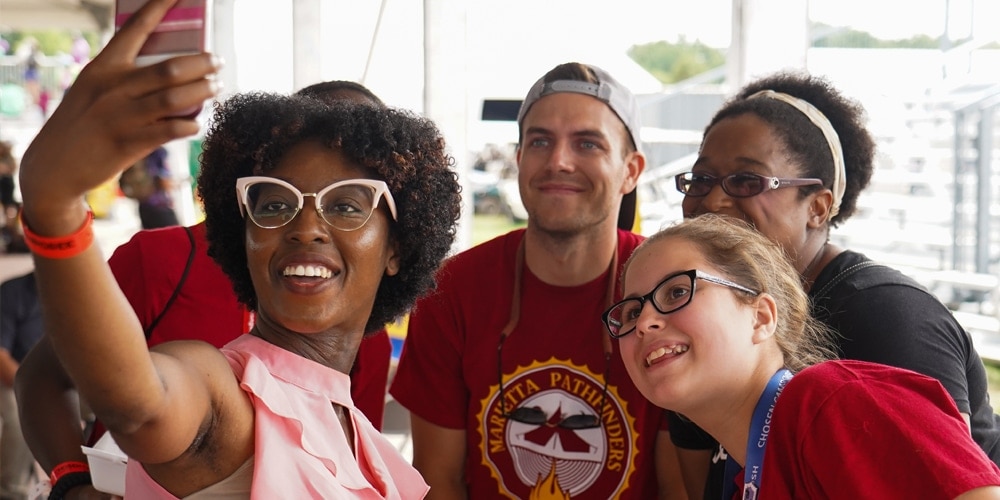 On the final day of the 2019 “Chosen” International Pathfinder Camporee in Oshkosh, Wisconsin, Pathfinders with a desire to become a pastor had the opportunity to mingle with church leaders of the North American Division (NAD) to learn more about pursuing a career in ministry.

The ice cream social served as the launch of NextGen, an initiative of the NAD Ministerial Association, which is seeking to address the projected low number of pastors who will be able to minister throughout the division within the next decade as current pastors retire.

“The average age of a pastor [in the region] is about 55, and the baby boomer generation is cresting for retirement,” said Ivan Williams, director of the NAD Ministerial Association. “We’re recruiting because, over the next seven to ten years, twenty-five hundred out of the division’s forty-three hundred pastors will be eligible for retirement.”

“We need young people to consider having the torch passed to them,” Williams said. “God called me when I was 13, and I pursued that journey to be a pastor. People who succeed in life have a sense of calling while they’re young. I think it’s about being faithful and God will bless with success. We see a litany of people throughout our history who God used at a very young age.”

Donna Jackson, associate director of NAD Ministerial, who also organized the social, said the overall goal of the event was to uplift the Pathfinders who have already felt God’s call.

“I’m shocked by how many had it on their minds already,” Jackson said. “The last thing we want to do is put pressure on young people because God may not be calling them to do this. God is the one who calls. We’re here to support what God is already doing.”

In preparation for the event, Jackson invited all the officers of conferences and unions to call for representation. The response of the 150 leaders who pledged their support and presence was overwhelmingly positive, she said.

“We wanted the young people to be able to look in the eyes of their leaders and see the personal care that they have. Administrators sit in committee meetings all the time, dealing with the hardest problems in the church. They have joyful experiences, but it isn’t easy to have that personal touch,” Jackson said. “We thought it would be good for both, but especially for the young people to know that their leaders are approachable and that they will give them their attention.”

William “Bill” Winston, president of the South Atlantic Conference, has been involved with ministerial recruiting over the years and has witnessed the decline with his own eyes. He remembers times when there were 40 to 50 graduating theology students emerging from a school like Oakwood University. In 2018, a survey of incoming freshmen studying theology in Adventist schools across the division revealed that the largest class was made up of 15 students.

“I’m here because I need to do my part to help encourage young people,” Winston said. “I’m at the end of my ministerial career, and I see the challenges of recruiting and finding people committed to the gospel ministry. We’re almost in crisis mode. We need to start much earlier than we do. We need to identify people and get them involved in the church now.”

Approximately 1,000 young people attended the social and shared testimonies of why they wanted to become a pastor. Samuel Castro and Belinda Rodriguez, a husband-and-wife pastoral duo that pastors three churches in the Oregon Conference, accompanied their 16-year-old daughter Ashley to the social. She recalled the exact moment she felt God’s calling.

“We were having communion at my church, and my mom was leading the service. All of a sudden, I just started crying. I balled,” Ashley Castro said. “My mom asked, ‘Are you OK?’ after she came down. And I responded, ‘I really want to do it. I want to be a pastor.’ It was this funny little feeling in my chest; I just wanted to help.”

Ashley was 15 at the time. She had already demonstrated a passion for service by helping children and leading a music ministry.

“We all just cried together,” Rodriguez said. “I think this is going to be an awesome path for her. For us as parents, it’s the greatest experience to have her to follow us.”

Rodriguez is excited to be able to help her daughter understand her calling at such a young age, an opportunity she did not have access to when she accepted the call herself.

“[Ashley] is full of energy. I think she’s become more and more convinced of her calling. We are blessed to be able to do ministry together as a family,” Rodriguez said.

Organizers said they hope the ice cream social inspired their fellow church leaders to use the model and hold similar events in their territories. NAD president Dan Jackson told attendees during closing remarks that this model should be followed every summer at camp meetings.

Further, the NAD Ministerial Association has organized a committee to help the NextGen momentum.

“The committee has youth pastors, laity, Pathfinders, and church leaders at all different levels,” Williams said. “We’re going to roll out more details during next year’s CALLED convention for ministers.”

The Ministerial team collected contact information for all of the attendees at Oshkosh who expressed interest in becoming a pastor.

“We want to stay in touch with them through the years,” Williams said.