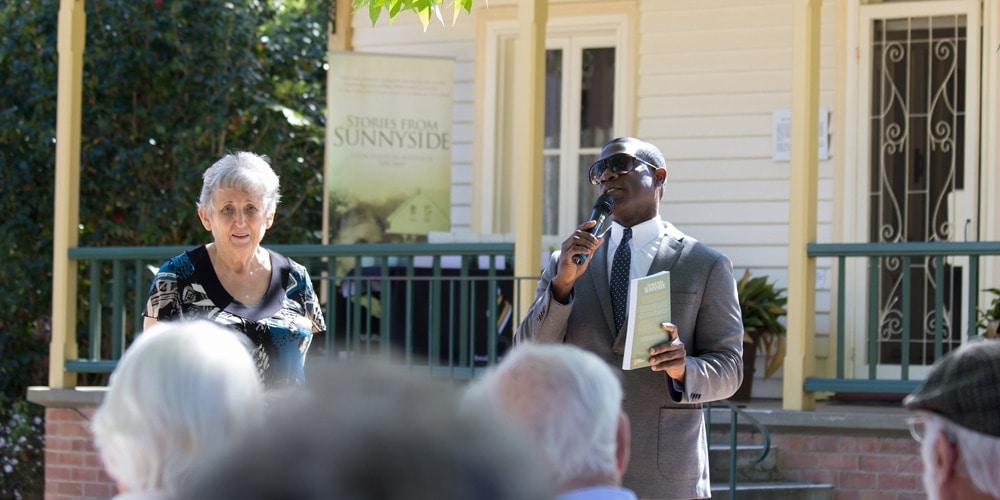 A new book about a Seventh-day Adventist Church pioneer’s life in Australia reveals new information, not about her theology but her practical ministry. The volume shows the positive difference church co-founder Ellen G. White’s faith made in her community.

Marian de Berg used primary sources—letters, mostly—in writing Stories from Sunnyside: Ellen White in Australia 1891-1900. The sources are familiar—de Berg serves as an administrative assistant at the Ellen G. White Seventh-day Adventist Research Centre, a role in which she has been for 29 years. However, she did not think of using them as research for a book until she was challenged by husband Kevin and colleague John Skrzypaszek, the research center director.

When the center began managing Ellen White’s Australia home (referred to as Sunnyside) “I got pressure from both home and work,” said de Berg during the launch at the Cooranbong-based historic home on October 1. “So, I thought, OK, I need to do something about this. I need to get our volunteer guides to tell more stories. I figured the best way to do this was to compile the stories for them.”

de Berg describes White, a prolific writer who Seventh-day Adventists believe exercised the spiritual gift of prophecy, as “a living Matthew 25.” She recalls the story of White taking healthy food to a sick family who refused to eat it insisting instead that White give the food to another family. So, White told the family to take several chickens from her property and make chicken broth soup. She referred to the family in one of her letters, writing we must “meet the people where they’re at.”

“Stories from Sunnyside does not provide an explanatory framework of Ellen White’s prophetic role, nor a theological charter for argumentative debates,” writes Skrzypaszek in the foreword. “It recalls the narratives in the life of a person engrossed in the depth of God’s love.” The stories de Berg includes are simple but “link with human experience, the story of our heritage,” writes Skrzypaszek. “They recall the images of a person who translated God’s love into practical Christian experience. . . . [Stories from Sunnyside is] not just another book, but a set of life-inspiring narratives challenging us to take a decisive step not only to read the story but to make those images ours.”

Publisher Nathan Brown, who is book editor at Signs Publishing, considers White’s ministry in Australia—traveling, speaking, founding institutions and churches and writing—as her most mature and Jesus-focused. “But the book also reveals her mature personal character, her family life, her care for others and her passion for growing the church she had helped found.” White’s focus on Jesus—she wrote the devotional commentary about His life called The Desire of Ages while in Australia—“changed the lives of people she came into contact with.”

White lived at “Sunnyside” during a depression in the eastern colonies of Australia. She cared for intransient people by giving them small jobs, feeding them and sending them on their way with a loaf of bread and a jar of jam. She also set aside land on what is now Avondale Estate, allocating small acreages to Adventists who had lost their jobs—a six-day working week caused problems for Sabbath keepers. “Her life here was such a blessing and such a joy to so many people, I just wanted to share it and have you read about it,” said de Berg during the launch.

Ellen G. White Estate associate director Dwain Esmond is thankful she did. Esmond, visiting Australia from the United States at the time of the launch, spoke of his role in addressing the theological challenges regarding White. “We stay in the fray, a lot,” he said, so it is good to read about “those spaces in her life where she lived the faith and where people were touched and moved by her practice of the faith.” And, he added, it is also good “to have a woman write about a woman.”

Esmond’s favorite part of the book comes at its end: the memories of others who lived at Sunnyside or whose family did. These “smoldering embers of faithfulness” remind him of Hebrews 11:4, the Bible passage that refers to the story of Cain and Abel—Cain kills Abel after God looks more favorably on Abel’s offering. “The verse ends, ‘Though he is dead, he yet speaks.’ That’s how it is with Ellen White. Though she is dead, she yet speaks. And her life, and her ministry, and her legacy, as exemplified in this wonderful book, continues to touch lives and move people to follow Jesus Christ.”

Stories from Sunnyside will soon be available from Adventist Book Centers in North America.