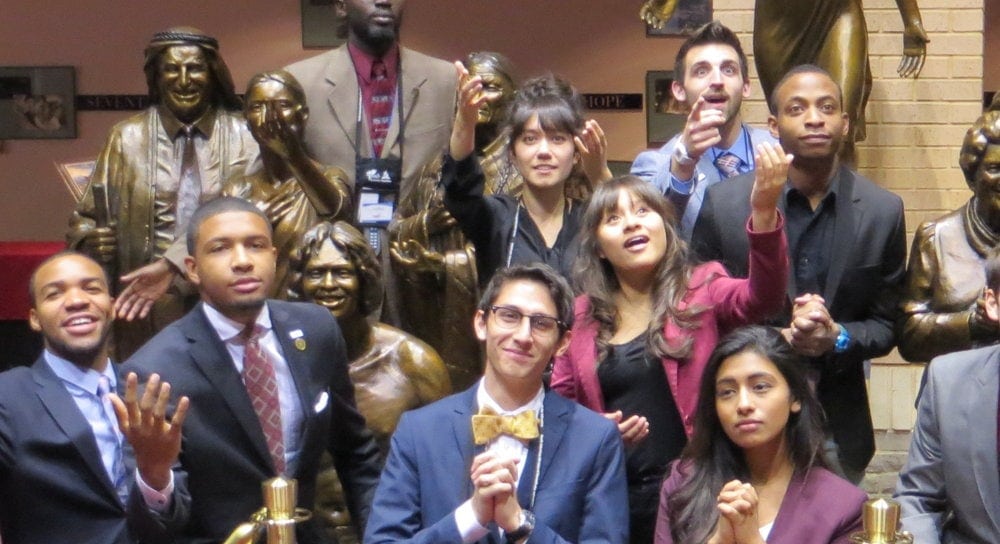 If the 11 student leaders had a memory that they wanted to take from their first visit to a major Seventh-day Adventist Church business meeting, it was the reason why they had come: to prepare a people for Jesus’ second coming.

So the student presidents from across North America spontaneously stopped at a bronze sculpture in the lobby of the shared headquarters of the church’s North American Division and General Conference to reenact its depiction of people greeting Jesus at His second coming.

As cameras clicked, some students raised their hands in joy, others pointed to Jesus sitting on a cloud of angels. Nisha Johny, student body president at Canadian University College, knelt on the floor and folded her hands in prayer.

“We were really inspired by the whole arrangement of statues when we first came to the building,” said Johny, 20, a junior English major. “We thought it would be nice to make a memory for all of us.”

The student leaders, representing nine colleges and universities in the U.S., one in Canada, and the Adventist Intercollegiate Association, were among 175 delegates who attended the North American Division’s six-day, year-end business meeting, which ended Tuesday. This was the first year that students received the speaking and voting rights of any delegate.

The sculpture that caught their attention is titled “The King Is Coming” and includes 10 life-size figures on the floor facing a giant image of Jesus and a host of angels. The artwork by Victor Issa was commissioned by the General Conference and installed in 2000.

Johny, a native of India who was born in Dubai and became a Canadian citizen last month, said she would return to Canada with a renewed energy to serve Jesus after sensing His presence at the division meeting.

“We carried everything with love, a Christ-like love, even when opinions were different,” she said.

Olivia Knott, student body president at Andrews University, said she had seen a group of people committed to Jesus. “I saw that in the way people respected one another when disagreeing and in the way we so often stopped to pray,” said Knott, 20, a senior double major in communication and religion and the niece of Adventist Review editor Bill Knott.

Andrew Ashley, student body president at Southern Adventist University, said he had grown up in the Adventist Church but only caught a first glimpse of the church’s inner workings at the meeting. He said he was humbled by what he saw.

“I learned that the church is led by men and women of God,” he said.

Ashley, 20, a senior theology major, said the group photo at the bronze sculpture would long remind him of every Adventist’s calling to proclaim the soon return of Jesus.

“We can get caught up in politics and other things,” he said. “We took the photo to remind us of why we are here.”