A “miracle” church has opened in an exclusive neighborhood of São Paulo as the local Adventist Church powers forward in seeming parallel with the bustling Brazilian city’s motto, “Non ducor, duco,” or “I am not led, I lead.”

The $3 million church is located in São Paulo’s elite Vila Andrade/Morumbi district and was opened as part of the Adventist world church’s Mission to the Cities initiative, which aims to share Jesus in the world’s largest cities.

São Paulo, the most populous city in Brazil, has a population of about 12 million and is so large that the Adventist Church opened its fourth conference office there this weekend.

The property of the new church was slated to become a car dealership, but the owner surprisingly decided to sell before finishing it, said Ted N.C. Wilson, leader of the Adventist world church, who visited the church on Sabbath, May 9, as he wrapped up an 11-day, four-country tour of the world church’s South American Division.

“It is working out just perfectly for a church that we would not have been able to have cleared by the city,” Wilson told the Adventist Review. “God was preparing the place before we even had it.”

The church’s $3 million price tag includes the cost of more than $2 million for the land and an existing structure.

An Adventist architect, Ricardo Rossi, is remodeling the current structure to include a waterfall and palm trees.

Adventist believers in São Paulo have played a leading role for years in the South American Division, which covers nine countries, including Brazil. The city is home to one of the division’s major institutions, Brazil Adventist University, or Centro Universitário Adventista de São Paulo, which opened in 1915 and celebrated its 100th anniversary during Wilson’s visit.

From Penniless Student to Multimillion-Dollar Benefactor

During the celebration on Sabbath, university leaders honored Milton Afonso, 93, who obtained his secondary education at the school 80 years ago.

When Afonso arrived as a boy, he was penniless and used soap and toothpaste for the first time in his life. He went on to create a major health insurance company and has contributed millions of dollars to the Adventist Church, primarily for media outreach and education as well as evangelism, Wilson said.

“That is what Adventist education and God's blessing can do,” he said.

Afonso attended the festivities with his wife. Among the attendees at the celebration were the governor of São Paulo State and the state secretary of ecology, who is an Adventist.

The celebration took place on a new university plaza, which was designed by Rossi and reflects strong biblical themes, including 12 palm trees, seven small trees, and fountains representing the water of life.

Center of Influence at Ground Zero

Wilson later spoke at the inauguration of a new conference office for the new Southeast Sao Paulo Conference, the fourth conference in the city, and visited a “center of influence” called Genesis in a building at Ground Zero, the very center of São Paulo.

The Adventist Brazil Publishing House, which owns two floors of the multistory building, moved its thriving Adventist Book Center to a higher level last year to renovate the lower floor for outreach activities such as cooking schools and Bible presentations. The publishing house, led by Jose Carlos de Lima, pays for the expenses of the space, which is its contribution to Mission to the Cities.

Church leaders said Adventist publishing is thriving in the South American Division. The Adventist Book Center had 25,000 customers last year, while the division-operated publishing house produces an enormous amount of literature used in missionary outreach. Millions of copies of the 2015 missionary book of the year, Viva con Esperanza (Health and Wellness) by Mark A. Finley and Peter N. Landless. will be distributed on Sabbath, May 30, by church members and young people all across the South American Division.

“Evangelism, Mission to the Cities, and comprehensive health ministry are alive and well in the dynamic South American Division,” Wilson said.

Before arriving in Brazil, Wilson met with church workers and members in three cities in Bolivia: Santa Cruz, La Paz, and Cochabamba.

Wilson arrived home in the U.S. state of Maryland on Sunday, finishing a trip that also took him to Peru, Chile, and Chile’s remote Easter Island. He leaves later this week for Harare, Zimbabwe, where he will lead a two-week evangelism series as part of a countrywide outreach campaign that involves dozens of pastors and evangelists. 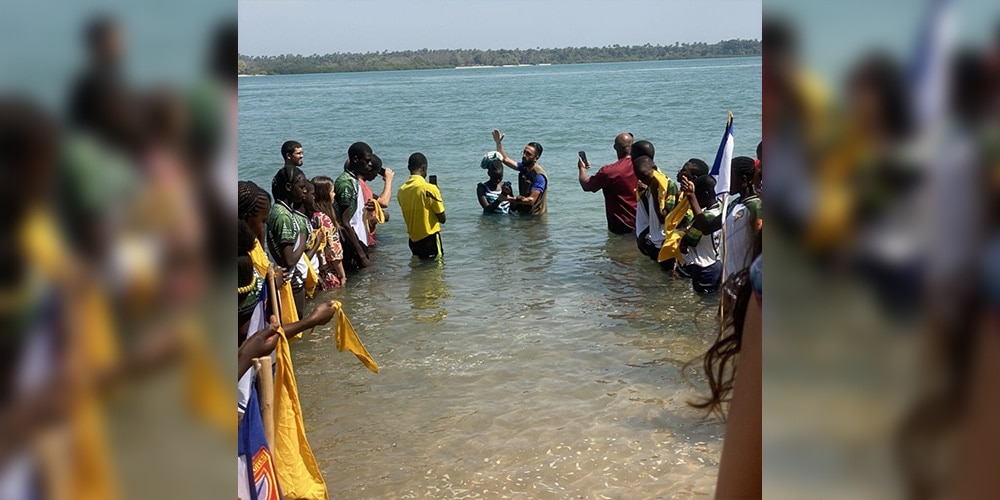