Seventh-day Adventist volunteers have assisted in the construction of the first church in Cuba in 16 years under the auspices of Adventist supporting ministry Maranatha Volunteers International.

Thirty volunteers traveled to Cuba in June to work alongside local crews in raising the two-story church in Cárdenas, a popular coastal tourist resort of 137,000 people located 70 miles (115 kilometers) east of the capital, Havana, as well as to hold dental clinics and children’s outreach activities.

Despite having worked in Cuba since the mid-1990s, political complexities made it difficult to mobilize volunteers for the more than 200 projects that Maranatha has completed in Cuba.

Then an opportunity to serve in Cuba opened up just a few months ago, Maranatha leaders said. Local crews were in the beginning stages of constructing the Cárdenas Seventh-day Adventist Church. Maranatha quickly organized a volunteer team to join the process, recruiting participants from an Interest list.

The Cardenas church, established in the 1930s, faced many difficulties, but the congregation eventually outgrew its space. Each Sabbath, church members had to set up a tarp and benches outside the original building to accommodate the attendees.

They urgently needed a bigger church, and when Maranatha arrived in Cuba in the 1990s, rebuilding Cardenas was on top of the list, said Don Noble, president of Maranatha.

“When we first started in Cuba, I used to meet with the union president, Daniel Fontaine, on a regular basis,” Noble said. “I can recall at one of the first meetings, he brought a list of projects that were high priority for them — and on that list was the Cárdenas project. Pastor Fontaine said, ‘We really need — desperately need — a church in Cárdenas.’”

But Maranatha was confronted with constant challenges, including land and permit issues.

Jorge Gonzalez Lopez, an elder at the Cárdenas church, remembers the long struggle to obtain land and building permits.

Every time “we believed that we had everything, the permissions, well, something was missing,” he said. “Our hope would vanish. We would be back where we started. It was like that, fighting for 20 years until, thanks to God, God permitted that we could build this church.”

The government approved the Cárdenas project in 2014, and local crews broke ground the next year. The church, designed by Maranatha, is about 10 times larger than the original church and has room for 500 people.

More than 200 Adventists live in Cárdenas and about 33,000 across Cuba, which has a population of 11.3 million.

In stark contrast to the simpler structures that Maranatha builds in many countries, volunteers were more limited in what they could do on the church construction site for safety reasons. Instead they worked alongside hired construction crews to assist on various tasks. Several on the local construction team were members of the Cárdenas church. The church is to be dedicated in early 2017.

The church project comes after a historic visit by U.S. President Barack Obama to Cuba in March 2016 inspired hope among Adventists on the island that thawing U.S.-Cuban relations might lead to greater opportunities for evangelism. In May, students from Washington Adventist University cleaned streets, painted houses, and conducted a health screening clinic in Havana, marking the first time that an Adventist university in North America had sponsored a humanitarian mission trip on the Caribbean island in living memory.

Danielle Casseus, a volunteer from the U.S. state of Florida who worked side by side with local members on the Cárdenas site, said her faith was strengthened by the experience.

“It increases my faith to see how they’re diligently working for something so hard,” Casseus said. “It’s been an encouragement to me to carry on and keep praying and having faith that when you pray for something, God’s going to make it happen in His own time.” 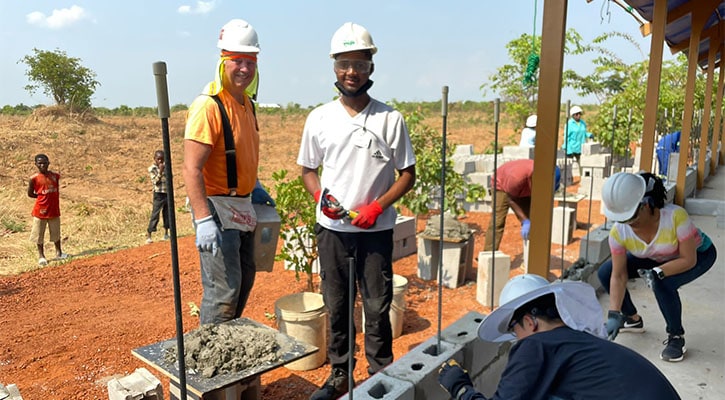