La Sierra University Praises No. 2 Prize as Answer to Prayer 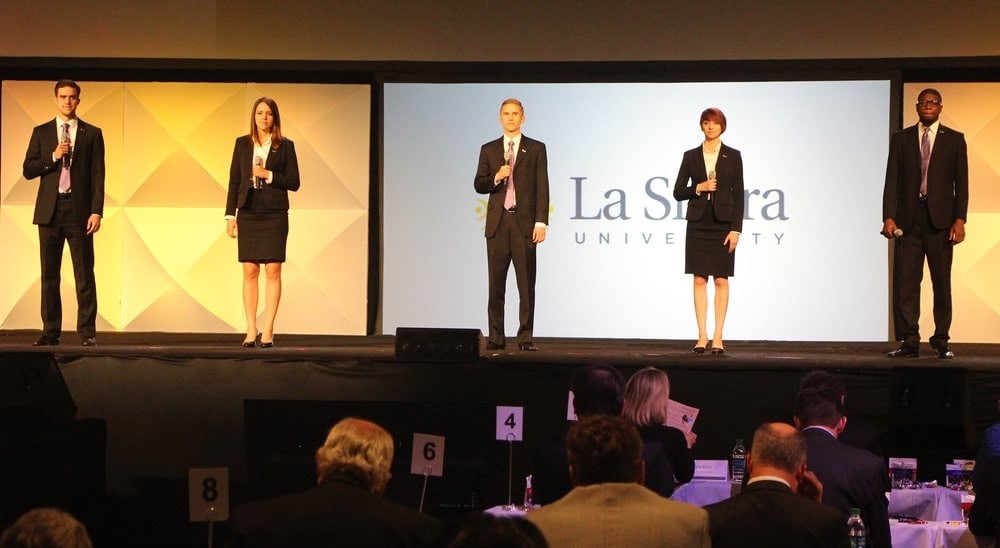 Thirteen students from La Sierra University did not pray to win first place in a prestigious U.S. competition that showcases young business talent.

Instead they asked God to allow them to reach the last round so they could share a message that success and integrity belong together in the business world.

The Seventh-day Adventist young people got their wish.

To a standing ovation, the team won second place in the Enactus United States National Expo for two entrepreneurial outreach projects: a refurbished bus that serves as a mobile grocery store in Riverside, California, and a “cow bank” that lends bovines to women in four villages in India.

“I will never forget the moment when that audience rose to their feet to celebrate what our students and students everywhere are capable of, what happens when Christ is the center of our team and our work,” said John Razzouk, the team’s main adviser.

The team from La Sierra, a private Adventist university in Riverside, California, took to the stage at a convention center in St. Louis, Missouri, last week to present its projects to a panel of about 100 judges, including top executives from Hershey, Coca-Cola, Unilever, Edward Jones, KPMG, and Walmart.

Competition was fierce to make it through three rounds to the final round, and teams from 178 colleges and universities presented their projects over four days in St. Louis.

The first-place trophy went to Brigham Young University-Hawaii, which will now represent the United States alongside students from 35 other countries in the Enactus World Cup in Johannesburg, South Africa, in October.

A Goal More Important Than Victory

Razzouk, president of a La Sierra team that reached the World Cup in 2007, said the university’s students are known throughout Enactus’ global organization for having brought a computer to the competition when others still used flip charts and for developing long-term, multi-phase legacy projects when others were implementing one-day events.

“But this year, our students set a goal for themselves far more important than their placement in the competition,” said Razzouk, whose advisory title is Sam Walton Fellow, named after the founder of Walmart, the world’s largest retailer.

Led by team president Nick Feldkamp, the members committed to not only work hard on their projects but also to communicate details and outcomes with total transparency, Razzouk said.

“From that first meeting at the start of the year through all that followed, we prayed that God would give us the strength to show the world what students can do, to show other teams what is possible, and show the most powerful business leaders in the world that success and integrity can go hand in hand,” he said.

“We did not pray for a first-place win,” he said. “We prayed that God would help us take our important message all the way into the final round of competition. And we did.”

The La Sierra students were open about their faith at the competition and could be seen holding prayer huddles regularly in the hallways of the convention center.

Mike Moore, a senior Walmart executive and chairman of Enactus United States National Advisory Board, praised the teams that participated in the contest for “making a significant impact on the livelihoods of people in communities around the world.”

“Not only are they doing the right thing for their communities, they are gaining highly sought-after skills and attitudes that shape our next generation of great leaders,” he said in a statement. Mobile Fresh and a Cow Bank

In addition to the second-place win on April 16, the team was awarded two trophies for Mobile Fresh, the mobile grocery store, and a total of $14,500 in prizes.

With Mobile Fresh, the university team joined forces with the Family Service Association of Riverside, California, to drive a bus loaded with fresh produce and other healthy food though low-income neighborhoods. The bus serves more than 1,000 people a month and has lowered their food expenses by an estimated 30 percent.

The team’s other project, the cow bank, is a field station in Denkanikottai, India, that lends cows to women who would otherwise earn an average of $2 a day, barely enough for food, the university said. The cow bank has reached agreements with local wholesalers to buy all the milk that the women bring for sale from their leased cows.

“Every woman who has participated in the program has seen her income at least double, and no one has defaulted on her loan during the two years of the project,” the university said in a statement.

John Thomas, dean of La Sierra’s school of business, said he was proud of the 13 winning team members.

“Finishing as the No. 2 Enactus team in the nation is an incredible accomplishment for our students, who have worked so hard to do important things both in the Riverside community and internationally,” he said. “They are truly showing the rest of the world how business can be a tool for making the world a better place.”