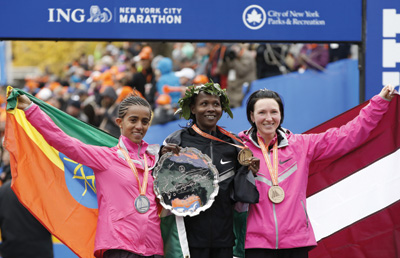 Seventh-day Adventists played several roles in the 2013 INC New York City Marathon on November 3, 2013. A Kenyan Adventist won the women’s division of the race, along with a U.S. $500,000 prize.

Also, two Adventists from Colorado ran to help vulnerable children around the world.

Kenyan Priscah Jeptoo not only participated in her first New York City Marathon that day, but also finished first, with a time of 2:25:07. She crossed the line 49 seconds ahead of the second-place women’s finisher, Buzunesh Deba. With the victory, Jeptoo earned the World Marathon Majors women’s title, and the $500,000 bonus that comes with it.

Jeptoo’s church pastor, Noah Kipkoeth Chumo, says that the church prayed for her. “We are very thankful for Priscah. She and her husband are very dedicated and committed to the church.” Chumo explains that Jeptoo’s husband has been called to be a deacon in the church next year, adding that “when she comes back from New York, we will have a special celebration.” GOING THE DISTANCE: David Kennedy (right) and Scott Miller ran the New York City Marathon to raise money for vulnerable children. They attend the Newday Seventh-day Adventist Church in Parker, Colorado, where Kennedy is the pastor.">(Editor’s Note: The January 2014 issue of Adventist World magazine will feature a longer report on Jeptoo’s win.)

Among the 50,000 other enthusiastic runners were David Kennedy (left), pastor of the Newday Christian Seventh-day Adventist Church in Parker, Colorado, and his friend and church member Scott Miller. The Coloradans ran with Team World Vision to raise awareness of vulnerable children worldwide.

Kennedy said, “Our church has worked with World Vision for the past 10 years in Rwanda, so we’ve seen firsthand the way they are able to transform a community through child sponsorship. When we were invited to run the New York City Marathon to raise awareness and money for child protection, it was a win-win—support a fantastic organization that does incredible work rescuing and protecting vulnerable children, and get to run one of the most epic marathons in the world.”

The 32-member Team World Vision collectively raised more than $208,000, with donations still coming in. Kennedy exceeded his personal fund-raising goal of $6,100, and finished the race in 3:44:52. Miller exceeded his goal of $5,000, and finished the marathon in 3:43:46. “That money will be used in places such as Bangladesh and Cambodia to fight child slavery and sex trafficking,” Kennedy said.

During the race, when things got tough, he said, “We thought of children in dark places all over the world, and that gave us motivation to keep running. We were running for them.”

World Vision is a Christian humanitarian organization that tackles the causes of poverty and injustice regardless of religion, race, ethnicity, or gender.