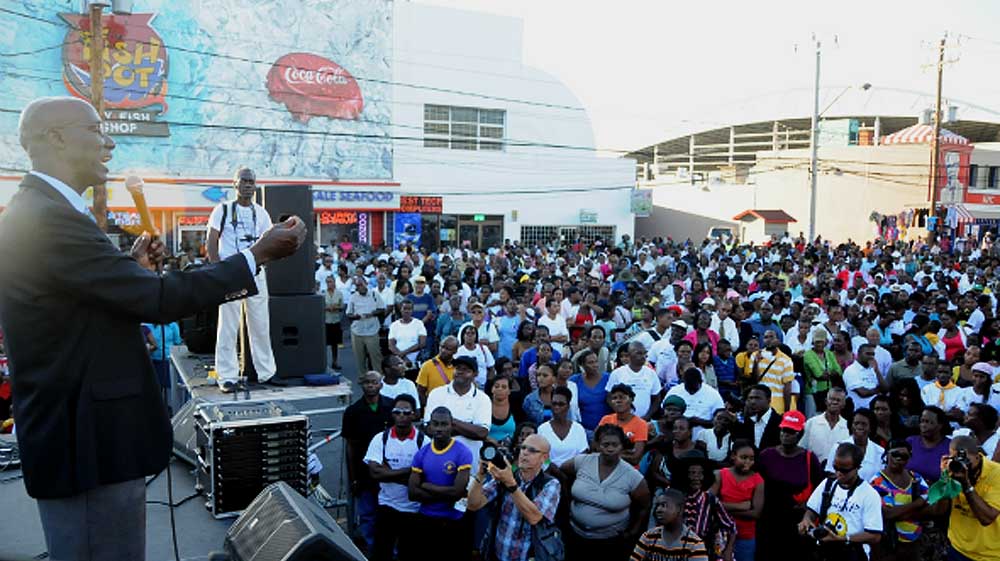 The Seventh-day Adventist Church launched its mega city campaign
in Kingston, Jamaica, where thousands of members and commuters were present
during the event on January 12, 2014. The campaign, dubbed as “Metro Mission 14
(MM14) – Hope for the City,” is intended to target the largest urban populated
region in Jamaica under the initiative “Hope for the Big Cities,” which is part
of the world church’s campaign to evangelize the major cities of the world.

Pastor Everett Brown, president of the church in Jamaica, in
giving an overview of the MM14, not only in Kingston, but the entire island,
emphasized that the assistance of each of the more than 730 congregations will
be sought to execute the various projects to reach members of their community. “We
seek through this initiative to address the spiritual needs of people in the
city of Kingston and in the major urban centers right across Jamaica from
Montego Bay in the west to Morant Bay in the east,” said Brown. “We believe
that it is our duty as a church to address not only the spiritual needs of
people, but to address the social, emotional, and the physical needs of
people.”

Pastor Brown indicated that the programs will rely on financial
and human resources to get into the communities and touch the lives of
individuals.

Forty-seven year-old Vinette Green (in wheel chair) celebrates
God’s goodness despite being physically challenged. Green was among thousands
of Adventist lay members and commuters who gathered in Half Way Tree Square,
Kingston, on January 12, for the launch of Metro Mission 14 (MM14) – Hope for
the City.

The areas of focus for MM14 will include meeting the physical needs
of individuals by providing clothing, giving medical attention and nutrition
education, assisting in resolving family and conflict issues, rehabilitating
law offenders, helping marginalized youth, and providing training and academic
empowerment.

“We want to reach every person in Kingston,” Brown emphasized. “We want to
reach every home and so we are calling upon the members of the church – each
one to reach one. No home must be left untouched, no street, city, or town, in
Jamaica should be left untouched. We want to turn Jamaica upside down and make
it a better place for people to live by sharing Jesus Christ with them.”

In the church’s eastern region, the humanitarian and spiritual
mission will assist the most vulnerable in Kingston, St. Andrew, and St. Thomas
with more than 100 churches in these three parishes being actively involved.

The launch included Adventist singers from across the region who
kept the huge crowd singing, clapping, and praising the Lord.

In giving the charge for the afternoon, Pastor Glen O. Samuels,
personal ministries and Sabbath School director for the church in Jamaica,
shared biblical analogies of Nicodemus who was told by Jesus that he needed to
be born again in order to see the Kingdom of God. “There are some things money
can’t give. Nicodemus was told that he needed to be transformed and somebody
here needs a new start.”

A call to commitment was made following the charge and scores of
persons responded and filled out commitment cards.

For
more on the Seventh-day Adventist Church in Jamaica, visit jmunion.org