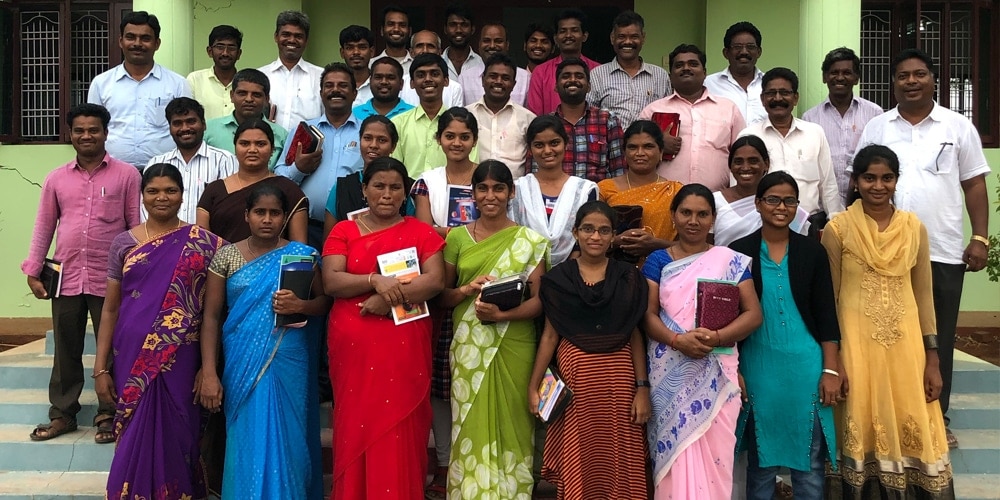 After years of disrepair and closure, 53 churches in east-central India have been recently reopened, It Is Written (IIW) leaders reported. In addition, the U.S.-based supporting ministry has launched activities of spiritual, health, and social services support to keep those churches active.

In November 2018, It Is Written began an initiative with local church leaders to reopen 50 churches that had been closed due to lack of funds.

“The initial assessment was not encouraging,” IIW ministry leaders said. “In addition to being without a pastor, the church yards were covered in garbage, windows were broken, and doors had rusted shut with no keys. Some churches were used to store tobacco or cotton, while others were serving as shelters for sheep, and buffalo.” Despite these discouraging odds, It Is Written representative Josephine Biegler chose 53 churches to reopen.

To ensure the churches stayed open, new church leaders had to be trained and paid. Twenty-five Bible workers were selected and began training.

“They studied the life and teachings of Jesus; Bible doctrines; Daniel and Revelation; history of the church; world religions; health principles; the gift of prophecy; major and minor prophets; and the writings of Paul,” leaders reported. They also shared that IIW Bible work coordinator Jack Phillips traveled to India and conducted a special course on practical methods for giving Bible studies and reaching the local communities.

After thorough training, these Bible workers were placed in the villages to care for their two assigned churches. They cleaned each church, and professional help made repairs and painted walls. Each church was given a new public address system, a culturally essential component to corporate worship. Bible workers faced prejudice from community members because community members’ trust was damaged or broken when the church closed.

Community health workers were hired to help the Bible workers overcome this prejudice. These women created a way for the Bible worker to enter the community with the gospel, leaders reported.

“Each worker was given training, a scale, stethoscope, blood pressure machine, and the book Where There Is No Doctor in Telugu, the local language,” they said. “Health workers checked glucose and blood pressure levels, cared for fevers, and bandaged wounds. They taught about cleanliness and educated the villagers about the harmfulness of tobacco and alcohol.”

Leaders shared that those women visited every home — Hindu, Muslim, and any other faith — praying at the end of the visit for those suffering. Some of the villagers accepted Christ because of the health workers’ invitations.

Newly opened churches began conducting night literacy classes in 26 of the churches. Eight adult literacy volunteers taught basic reading and writing along with Christian songs. They also prayed with the students and encouraged each to come back to the church on Sabbath. Through their efforts, people accepted Jesus Christ as their Savior through baptism.

A United States sewing ministry partnered with the churches to offer sewing classes for local women. The women learned how to make garments, and were given a brand-new sewing machine. They left the class spiritually fed and with training to become financially independent.

“Students from an Indian theology school conducted a three-day evangelism program in each of the 53 churches. Their program helped support the Bible workers in reaching the unreached and gathering the scattered members,” they explained. “Students visited the entire village, prayed with everyone they could, and invited the community to the church meetings.”

Earlier this year, the IIW Eyes for India program conducted a medical camp for 100 villages, including the 53 communities with newly reopened churches. Medical physicians from the United States provided free medical expertise and partnered with local nursing students. More than 2,300 patients were treated, more than 4,500 people were screened for cataracts, and 927 were selected for cataract surgery, which began on February 24, 2020.

During February, two It Is Written mission teams traveled to India to hold revival meetings at 20 locations covering the 100 villages that also received medical care. Over the course of the month, approximately 4,500 people attended these meetings throughout the sites. God poured out His blessings, and 1,197 people accepted Jesus into their hearts.

“Every quarter, the church will also conduct an eight-day training for elders to equip them to serve the church and community. And 48 more churches have been selected for reopening and have already been cleaned,” leaders reported.

During May, the IIW Hope Awakens sermons were translated into seven Indian languages and livestreamed on Facebook to the entire local area. Thousands have seen the broadcasts.

The infrastructure is established to ensure these churches stay open for many years to come and continue growing and serving their communities with the love of Jesus.

A treasurer of a local church in India writes, “Thank you, It Is Written, for entrusting us with the resources we desperately needed to reopen churches…. We request that you continue to support the work we are determined to undertake here in India. God bless you all.”

The original version of this story was posted on the It Is Written page.