In the Bahamas, Adventists Ramp Up Relief Efforts Amid Death and Devastation 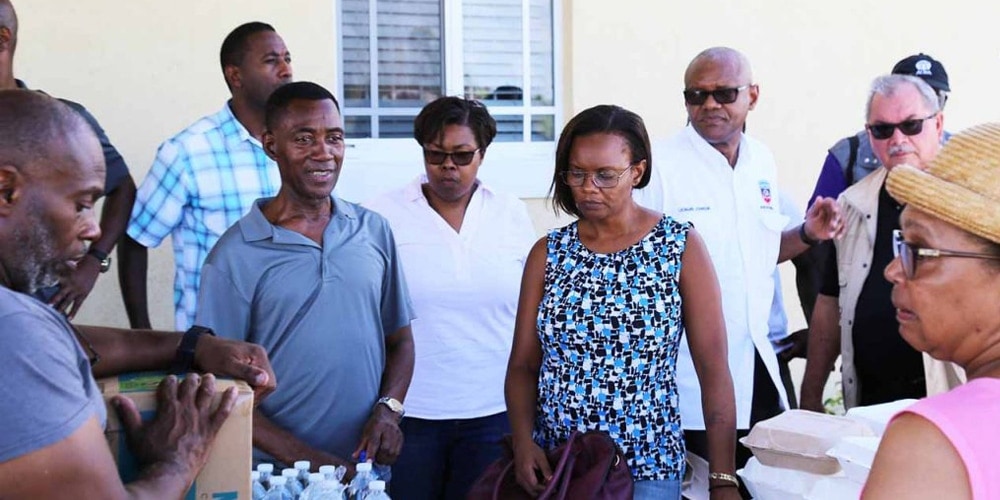 Hurricane Dorian took the lives of seven members of Shirley Smith’s family. Now she struggles to articulate her grief, to express what she’s feeling. Smith is one of many in Grand Bahama who lost loved ones, lost everything in her home, and is still dealing with a large amount of debris, no electricity, and no running water.

Smith makes her way to the Freeport Adventist church in Freeport, Grand Bahama, to seek a hot meal for herself and family members.

“Everyone has been affected and was touched by this storm in one way or another,” said Arleen Sands, women’s ministries director for the Adventist Church in the North Bahamas Conference, headquartered in Freeport. “It’s heartbreaking, it’s all painful,” she said.

Grand Bahama had never seen a category 5 hurricane before Dorian struck, much less one that parked itself over the northern Bahama islands for three days, bringing storm surge as high as 12 feet (about 3.7 meters).

Sands’s home was affected, but she and eight other volunteers have been cooking to provide meals for 400 to 600 people for lunch and supper since the waters receded on September 5, 2019. “We are keeping busy helping those in need,” Sands said.

She gets up at 6:00 a.m. to begin cooking on her gas stove for the first meal distribution between 1:00 and 3:00 p.m. She goes to the grocery store for more supplies and then starts to cook supper to distribute at 6:00 p.m. By 11:00 p.m. she is finished, and the next day brings the same demanding schedule for her and her team of volunteers.

“Like Jesus, I have to put my needs behind and help others,” said Sands, who is also overseeing the distribution of goods through community services in the local conference. “Many lost everything. They just have the clothes on their backs.”

Sands reaches over to Smith, embraces her, gives her words of encouragement and hope, and prays for her. “Bring your family members struggling, or if you want, we can come over and visit,” Sands says to Smith.

The church’s feeding initiative also involves the delivery of hot meals to the homes of people who aren’t able to drive or get to the meal distribution spot, Sands explained.

“As long as there are funds to keep this going, we will continue to work at providing this basic need, because so many are still without clean water or able to cook where they live,” she said.

Seventh-day Adventist leaders from the Inter-American Division (IAD) church region witnessed ministry in action by many church members on a September 15 visit in Freeport. The leaders were on a tour of Grand Bahama to meet with local church leaders and members and visit some of the affected churches, homes, and the church’s K-12 school.

“You play an important part in this ministry, even as you have all been affected by the hurricane,” said Elie Henry, president of IAD.

Henry thanked church members for their dedication to serving so many in the community every day and joined in prayer for them and asked God to strengthen them.

Special funds have been allotted to assist in providing hot meals to church members and the community after the storm, and the assistance will continue until it is no longer necessary, IAD administrators said.

Church leaders also visited Grand Bahama Academy, where the principal and some teachers were preparing classrooms after the storm flooded the campus, damaging classroom furniture and school supplies.

“We just don’t know what will happen, but we must reopen the school soon,” said school principal Avoney Wellington to visiting church leaders on September 15. Wellington, who oversees 19 full-time and four part-time teachers and staff, said that many parents have relocated outside of Grand Bahama and have asked for a refund on the tuition they paid during the summer. “Many of our teaching staff lost everything in their homes; students’ homes were also affected or destroyed.”

“The desks and chairs, filing cabinets, and our computer room were all flooded, so we lost all that,” Wellington said. The school ended last year with a total of 215 students, and as the days went by after the hurricane, they hoped to see a lot of students return. Days after the visit, the school opened its doors on September 18 with 107 students. A few days after opening, enrollment had reached 155 students. “I have seen the hand of God, and we are going by faith, pushing to keep the school running, so we will work with what we have,” Wellington said.

Four of the seven churches on Grand Bahama sustained significant damage, said Peter Kerr, president of the Adventist Church in the Atlantic Caribbean Union (ATCU), which oversees the church in the Bahamas, Cayman Islands, and Turks and Caicos. “While these are pending assessment, members are meeting in homes to worship and study the Bible together,” Kerr said. On Saturday (Sabbath), September 21, church leaders gathered members from four of its churches — the Freeport church, the Sunrise church, Shiloh, and the French-speaking church — to worship together at a non-denominational facility in Freeport.

“We are in the process of repairing the Sunrise Adventist church, which is a new church that needs some adjustments to it so that they can meet for worship soon,” Kerr said.

Local church leaders said they know that some of the 2,500 members on the island have left because they no longer have a place to live. “We still don’t know how many yet, but we should learn more about their current living situation or relocation,” Kerr said.

The situation has some challenges, said Roderick Sands, treasurer for ATCU. “This is a hard financial blow that is going to really affect the conference,” he said. “It’s going to take a whole lot to get the church back on track, but we are doing what we can to assist the membership and community in rebuilding as funds are available.”

The church in Grand Bahama continues to provide drinking water, hot meals every day, and has recently sent beds to assist those who have lost everything in their homes.

In addition, church leaders have put in a request to Loma Linda University’s Trauma Team to assist church employees, church members, and the general public with behavioral health counseling in the aftermath of Hurricane Dorian.

The Adventist Development and Relief Agency (ADRA) International office emergency response team has been on the ground in Grand Bahama to assess needs and will take part in several projects. One of these includes the distribution of cash vouchers for those who have been most affected by Hurricane Dorian on the island.

ADRA has also been engaged in hot meal distribution in Freeport, serving 500 people each day, and has established a second distribution point in the eastern part of Grand Bahama, with plans to establish additional ones. ADRA’s response has also included sending food, cooking supplies, water, and 700 hygiene kits to Freeport to be distributed at ADRA’s food distribution centers.