In North-America, Students and Church Leaders Chat in Live Event 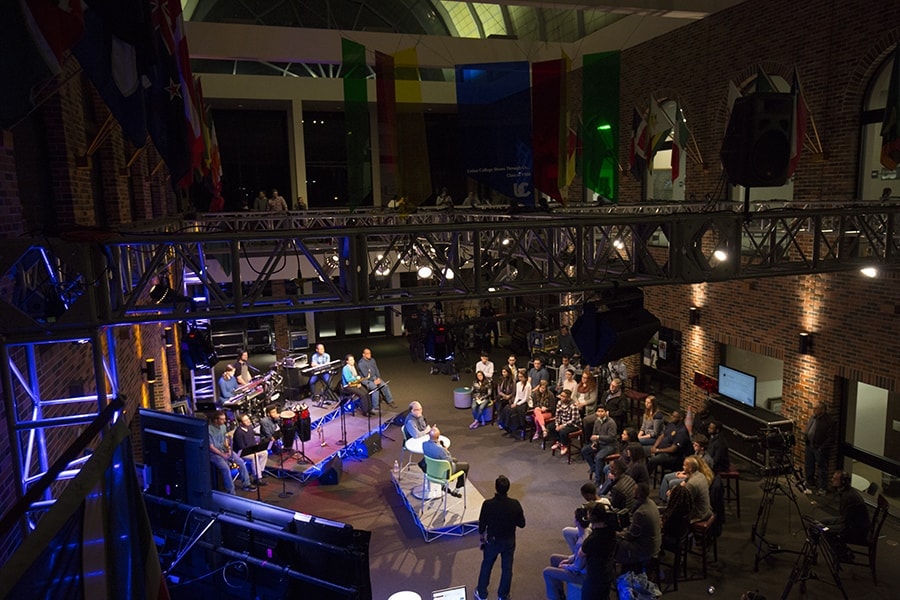 Seventh-day Adventist college and university student leaders and church leaders in the North-American Division (NAD), or church region, met in the first Facebook Live Event on the campus of Union College, in Lincoln, Nebraska, United States, on March 14.

The 100-minute Q&A session with NAD president Daniel Jackson and executive secretary Alexander G. Bryant, entitled “Is This Thing On?” brought together Union College students and Adventist Intercollegiate Association (AIA) student leaders from across the division, who had traveled to Nebraska for the 2017 AIA Convention.

“Is This Thing On?” is an intentional effort to reach as many young adult Adventists in North America as possible—and engage in a conversation on issues important to them.

Students at the event, along with young adults on social media across the territory, asked questions on many subjects, including race relations in the church, enrollment in Adventist schools, women’s ordination, and LGBT+ issues in schools and churches.

Just a few hours after the event aired, Facebook reports indicated that the video received 23,000 views, almost 400 shares, and 1,300 posted comments, which included questions and statements regarding the event. Hundreds of tweeted comments, questions, and quotes from the event, and more than 200 retweets, all using #NADnow, helped ITTO trend at number two on Twitter for March 14.

“Using social media as a platform for communication is something relatively new for the church,” said Dan Weber, director of communication for the NAD. “But it’s proving to be a valuable way to reach audiences and connect with them in both broad and personal ways.”

In preparing for the event, Jackson expressed excitement about talking with the students and young adults sending questions via Facebook and Twitter. “We have the opportunity to dialogue, pray,…and work through issues together,” said Jackson. “We want to engage our young adults in open and transparent conversation on issues that are important to them. Dialogue is vital to the health of our church.”

While some of the questions carried more of a personal tone—leaders were asked about their least favorite book in the Bible, their favorite pet, and what they liked about each other—the core of the program was spent in tackling issues young people across North-America find difficult and challenging, both in their churches and their schools. The leaders did not seem to dodge any question, but answered to the best of their abilities, according to opinions posted later on social media.

So what did the leaders say? Here are some of their answers on three of the topics discussed.

On the issue of race relations in the Seventh-day Adventist Church, Jackson said he believed even in our church “there is a soft underbelly of racism.” He then shared what he called his “personal little philosophy” on the issue: “If I come to a place where I feel better than another person, I have just disconnected from the Gospel of Jesus,” he said. “Racism is sinful.”

Both leaders acknowledged there is still room for improvement, and that the sooner we tackle the issue the better. “Unless we hear each others’ stories and are transformed by those stories, we will always see [racism] in some kind of way,” Bryant said.

“We believe we are on the borders of the heavenly kingdom,” Jackson added. “[But] we are not going anywhere until we demonstrate…that we love each other. Until then, Jesus will not come.”

On the issue of women’s ordination, both leaders emphasized the importance of remembering that the North-American region is part of a worldwide family. “We do not agree with the world church on this topic,” said Jackson, referring to the world church decision not to authorize divisions—or world regions—to ordain women within their territory. “But we are not an island; we are part of a worldwide movement.” Both leaders, however, shared the ways in which the NAD administration is supporting the call of women pastors across the territory, including a special fund to assist conferences hiring women for ministerial positions.

"Don't give up. We should stop taking the back bench as young people. Serve."

While answering a question on the church attitude to the LGBT+ community in Adventist schools and local churches, Jackson was adamant that even though he doesn’t believe the church can move away from the teachings of Scripture on the issue, it doesn’t mean we must condemn other people. “When I don’t understand the personal experience of someone else…I have learned to default to compassion,” he said. “I don’t have the right to damn that person.”

Bryant explained that while he feels the position of the church is stated clearly, in the practice of church, we sometimes have fallen short. “We must do better,” he said.

Jackson agreed. “We need a covenant that we will treat people in godly ways, even as we uphold the Word of God to be pre-eminent,” he said.

Thanks to social media, the young people’s reactions in the studio and across the territory began to pour in even as the meeting was still well underway. Several young adults said they appreciated the leaders’ openness to discuss even the most difficult topics. Below is a sample of some of the reactions of the young people on social media.

Garrison Hayes tweeted: “Really appreciate the candor of our ‪@NADadventist leaders about women’s ordination and the way the NAD is navigating these tricky waters. #NADnow.”

“Great job! Really appreciated the transparency and willingness to tackle tough issues,” posted Angelo Grasso. “I hope you all do this again soon. Would love to see issues around mental health and addiction addressed in future episodes.”

“Young adults: we are more than the future of the church,” tweeted Michael Gibson. “No matter age, if you are alive today you are the church now. #NADnow.”

“Thank you! It's time for us as college students to stop saying we are the future,” posted Leonel Warner. “No, we are the church; we need to read and show ourselves approved so that we can carry on this message!”

Plans are underway for another event in the fall. In the interim, questions may also be answered by using #NADnow when tweeting or posting questions.