In a ‘Survival Year,’ God Will Provide the Means Needed, Treasurer Says 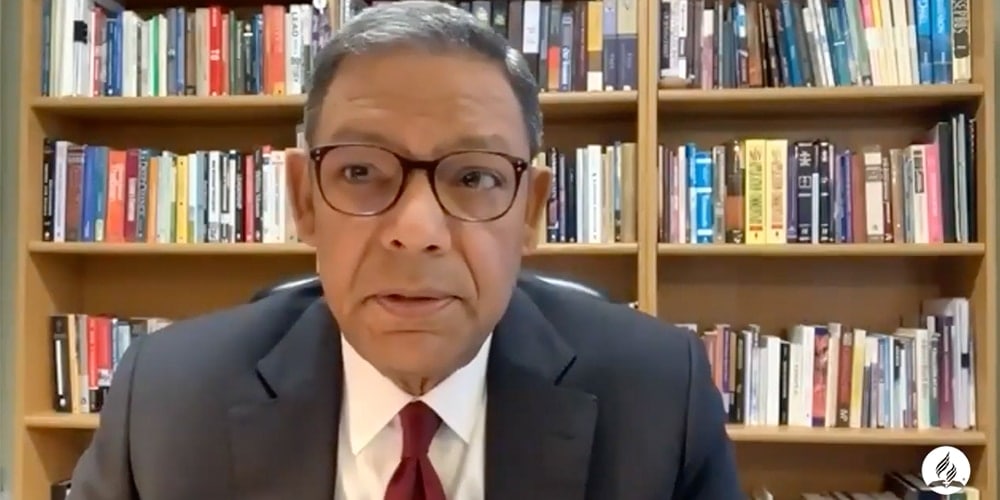 In a time of worldwide challenges to the financial operation of the Seventh-day Adventist Church, world church treasurer Juan Prestol-Puesán called on church leaders to redouble their dependency on God’s guidance and protection. “This continues to be more relevant than before,” he said, “as our new realities have changed our expectations for 2020.”

Prestol-Puesán’s remarks were part of his October 8 financial update to the members of the General Conference Executive Committee representing the world church, who are meeting virtually for the 2020 Annual Council.

Prestol-Puesán acknowledged that the ongoing COVID-19 pandemic has affected church operations around the world. Between March and June 2020, he said, all major church regions reported a declining rate of tithe and mission offerings, year-over-year. It is expected that July to December will be no different. “We know that the year 2020 is a survival year, and that normality may return sometime in 2021.”

In April 2020, Adventist Church financial officers had reported the positive results of fiscal year 2019. But “the closing of operation for 2019 feels like it was a long time ago,” Prestol-Puesán acknowledged. “We are in the middle of an extended worldwide economic slowdown; the US dollar shows itself strong in relationship to other currencies, and unemployment remains high in the United States.”

He also reminded Executive Committee members that many congregations are unable to meet other than digitally, church executives’ travel has stopped, and adjustments to the operations have been introduced, including the remuneration levels at headquarters.

Adventist institutions and programs have implemented significant budgetary adjustments in order to survive 2020, Prestol-Puesán said. In that regard, he expressed his appreciation to institutional leaders for their proactive approach and for what he called “the innovative spirit displayed by our division leaders by adjusting budgets and adapting their finances to the days we are living in.”

Financial Results and Actions through  September 2020

Prestol-Puesán reported that the operating statement through September 2020 shows a decrease in Net Assets of almost US$5.9 million. The church’s working capital (current assets minus current liabilities) level is 86.04 percent, and liquidity (assets that can be converted into cash quickly to meet commitments) stands at 102.26 percent. “We are grateful that our existing resources have provided for our contracted obligations and responsibilities,” he said.

The Adventist Church headquarters is expecting a negative financial impact on tithe and offerings estimated in the amount of US$26 million. In view of that estimate, Prestol-Puesán reminded Executive Committee members of steps implemented according to an action from July 9, 2020, including suspension of allocations to selected functions due to lack of income; introduction of budget reductions for departments and programs; and reduction, reallocation, and redirection of personnel. Remedial steps also included adjustments to remuneration, area travel, and travel budgets; planning of additional reductions as needed; and redirecting the application of funding from existing allocations to other areas of need as the circumstances require it.

Guidelines for the 2021 Budget

Among the guidelines to inform the 2021 budget, Prestol-Puesán mentioned, among other items, applying reserves as needed to seek the presentation of a balanced budget for 2021, and reassessing the financial situation after the 2020 fiscal year income has been recorded. It is also key, he said, to maintain communication with the world field through the division treasurers and division officers as to the progress of the strategy.

Prestol-Puesán explained that he mentioned the action voted on July 9, 2020, because the final impact of COVID-19 on church life is still unknown. “We know that it will affect the finances of the church at every level even more,” he said. “We are still unable to see the entire panorama, and while we believe we will be able to see it even more clearly in the next few days and weeks, we must remain proactive, vigilant, and conscious that every dollar spent is of importance, and while mission must continue, our level of financial diligence must remain high to conserve resources.”

The 2021 Budget will be significantly impacted by the current situation, Adventist Church undertreasurer Ray Wahlen explained. According to Wahlen, budgeting for the next year assumes that the COVID-19-related slowdown will cause a reduction of US$18.8 million. Also, a Tithe Parity plan voted in 2019 suggests  a reduction of US$4.3 million. Finally, Wahlen said, income is expected to be negatively affected by the ongoing strength of the US dollar against other world currencies to the amount of US$2.9 million. For instance, he explained, “the 30 percent devaluation of the Brazilian Real, coupled with the fact that the South American Division provides roughly 20 percent of our income, had a major negative effect on the 2021 budget.” Accordingly, it is expected that the net impact on income in 2020 will reach US$26 million (or 15 percent of 2020 budgeted expense).

Wahlen acknowledged how difficult it is to prepare a realistic 2021 Budget based on the current data. “Our standard practice has been to budget for 100 percent of the actual income received two years previous, [which] in this budget would mean 2019. However, due to COVID-19, this approach would be totally unrealistic,” he said. So, Wahlen said, church financial officers have opted to base the 2021 income on 100 percent of the projected income for 2020, following current data and estimations. It is an approach, he acknowledged, that has its weaknesses, but that it appears to be the most realistic assumption.

Wahlen explained that budgeting under the new method automatically implies reductions to budgets of several departments of the General Conference. For instance, the office dealing with international employees will suffer an automatic decrease of US$4.3 million (or 16.4 percent). In this case, that shortage will be supplemented with US$4 million in specific donations made for years for “foreign missions.” It is a one-time supplement, Wahlen said, that fully depletes this resource.

Finally, Wahlen reminded the committee that the General Conference headquarters operates on a capped 2 percent of gross worldwide tithe. If tithes decrease, the same decrease happens to Office Operating Expenses. In this case, it will imply a reduction of US$7.6 million, or 15.1 percent less than in 2020. “This major reduction has been accomplished by personnel reductions, maintaining the 50 percent reduction of travel budgets implemented in mid-2020, decreased depreciation funding, and elimination of the contingency budget,” Wahlen said.

Wahlen made clear that unfortunately, despite more than US$20 million in reductions, the amount is not enough to offset the US$26 million in lost income. He explained, however, that for years the General Conference has allocated reserves in the event it experienced a loss at the end of the year. “We praise the Lord that this allocated reserve has not been tapped,” Wahlen said. “It is anticipated that in 2020 we will need to do so for the first time due to losses resulting from COVID-19.”

For Wahlen, the idea of bringing a budget for approval in which expenses exceed income by such a significant amount is not appealing. However, he said, church financial officers feel that it is “an appropriate middle ground or interim step between the significant reductions that have already been implemented when compared to the additional major cuts to personnel and to appropriations that would otherwise be necessary.”

He added, “Looking to the future, our plan is to continue to closely monitor all aspects of the General Conference’s financial operations during the next six months. God has blessed us — in advance — with healthy reserves that will allow us to take this approach in the short term.” He cautioned that “significant reductions at the time of Spring Meetings in April and at General Conference Session in May 2021 are a strong possibility.”

A Word of Thanks

To conclude his report, Prestol-Puesán said that he wished to express his immense gratitude to God for providing the resources during the first nine months of 2020, and for making church programs still viable despite the circumstances. “We believe that He will provide the means, and the people that will do the work that remains to be done,” he said.

Prestol-Puesán  also had a special word of thanks to the many volunteer local church treasurers, the treasury personnel who serve in multiple entities around the world, and the dedicated and efficient treasury and accounting staff of the General Conference.

He closed with words recorded in the Bible in Psalm 121: “[Our] help comes from the Lord,” Prestol-Puesán reminded the committee. “He does not slumber.” And, he added, “He is our keeper; He is our shade; and shall preserve our going out and our coming in now — during the days of COVID-19 — and forever more.”

In brief remarks after the Treasury team’s presentation, Adventist Church president Ted N.C. Wilson agreed. He encouraged church leaders and members to keep trusting in God’s leading despite current challenges. “COVID-19 will not stop the proclamation of the three-angels messages,” he emphasized. Former Adventist president Jan Paulsen seconded. “The Lord will provide,” he said, “working also through very competent and skillful, faithful servants.”

The motion to record receipt of the Treasurer’s report was passed by a vote of 229 to 2.