Hundreds Attend Opening of It Is Written Headquarters 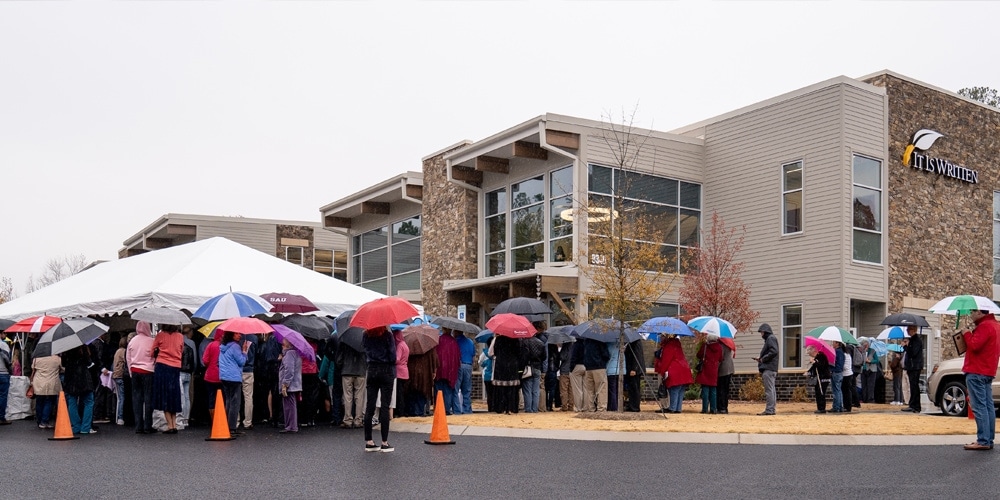 It Is Written, a supporting ministry of the Seventh-day Adventist Church, hosted the opening of its new headquarters building in Collegedale, Tennessee, United States, on Friday, November 22, 2019.

The three-hour event, which included a dedication, a ribbon-cutting ceremony, ministry tours, giveaways, and refreshments, was live-streamed on the It Is Written Facebook page.

After the ceremony, the more than 500 people attending were invited to tour the new facilities, as ministry directors led the crowd through the various rooms, answering their questions and providing highlights of their work. Among other activities, guests could opt to film their own television spot in the studio and heard about ministry activities around the world.

After 63 years, It Is Written finally has its own home. Previously headquartered in California, United States, the ministry moved to Tennessee in 2014 and began leasing separate office and warehouse spaces in Chattanooga. After two years of construction, staff moved into the 41,000-square-foot building in September. The new headquarters employs more than 40 people and allows for office, studio, and warehouse space under one roof. The space greatly expands and improves the efficiency of studio capabilities from the past and provides room for future growth, ministry leaders said.

Bradshaw said he thinks the new facilities will provide outstanding support for the effective service the ministry wishes to provide.

“A major advantage is the increased ministry effectiveness this move brings us,” he said. “We can not only do more than ever for God, but we can also now be more efficient than ever.”

The building site was originally slated for a hospital, but red tape curtailed the plans. After the property changed hands several times, It Is Written leaders said they are humbled to offer hope and spiritual healing to people around the world from their new headquarters on the site.

About It Is Written