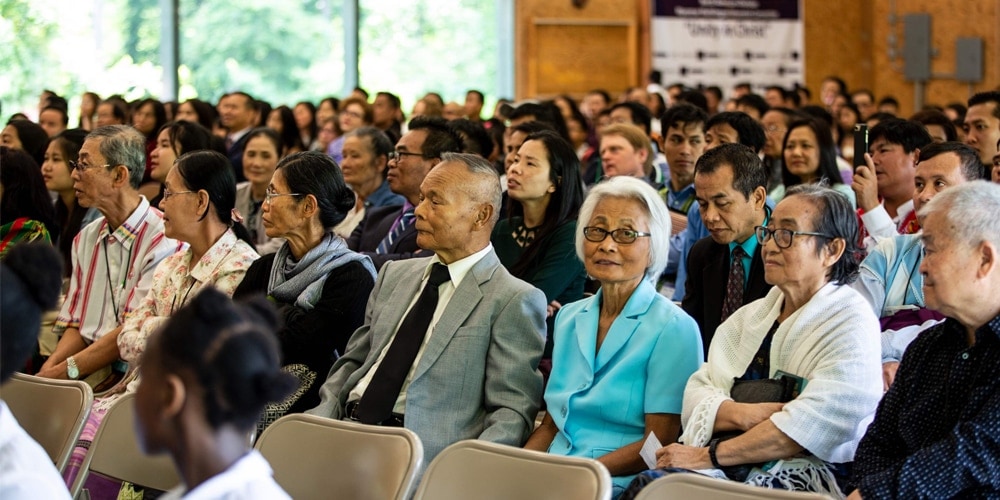 On the first weekend of June 2019, almost 600 people from around the United States gathered for the North American Division’s bi-annual Myanmar Multilingual Convention, held at Timber Ridge Camp in Spencer, Indiana.

The number of refugees in the Lake Union of the United States — a region that encompasses the U.S. states of Illinois, Indiana, Michigan, Wisconsin, and a portion of Minnesota — has grown significantly. Just ten years ago, the Lake Union had no Myanmar congregations. Today there are ten. An urgent need for ministry laborers has arisen in that and other regions of North America, leaders said.

In 2019, two initiatives were begun at the convention that are designed to bring spiritual revival and equip laborers with tools needed to continue the work within the refugee groups.

Over the past several decades, many have fled Myanmar to seek asylum in neighboring countries. According to the Center for Immigration Studies, between 2017 and 2018 a total of 3,555 refugees from Myanmar were settled in the United States.

Relying heavily on church plant consultants, Terri Saelee, Ministry Special Project Coordinator for refugees and immigrants in the North American Division Multilingual Ministries office, said that the NAD believes in empowering people from the different refugee groups. “By doing this,” she said, “you bypass language barriers and cultural misunderstandings.”

Saelee works closely with Samuel Ngala, pastor of the Fort Wayne Karen-Burmese Group and Hope Company (Indianapolis), who understands Myanmar and its history.

“Culture is beautiful, but culture also can bring division,” Ngala said, as he explained the complexity of working with the different language groups. “Language may be poetic but also can bring animosity,” he continued. “With this convention and the theme ‘United in Christ,’ we are hoping to bridge those gaps with love.”

The results of the NAD Myanmar convention are such that, alongside spiritual growth, many church members have dedicated themselves to launching church plants for refugees and immigrants in other cities.

“Young people are studying theology in preparation for ministry, and refugees are sharing their faith in Jesus with colleagues at work,” Ngala said.

The General Conference has designated Saturday, June 15, 2019, as World Refugee Sabbath. It is a day set aside to raise awareness of the needs of the more than 65 million people who have been displaced from their homes as a result of civil unrest and persecution.

Churches, groups, families, and individuals are invited to participate using the resources made available on the NAD website as well as by exploring the information and stories shared by the Adventist Development and Relief Agency (ADRA), leaders said.