How I Saw Jesus’ Hands in San Antonio 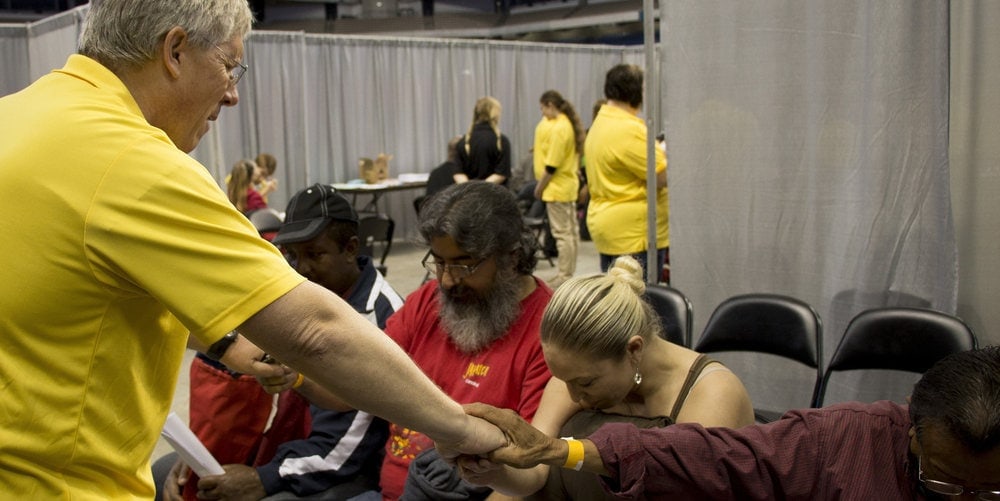 The woman in the waiting area covered her mouth with her hand every time she spoke.

She told me that she was embarrassed by her teeth and had come to the Alamodome stadium in San Antonio, Texas, in hope of smiling again. In a heavy Spanish accent, she confided that she had not smiled in years.

The woman was among thousands of people waiting for free dental and medical care at the Alamodome last week. The free clinic, organized and implemented by Seventh-day Adventists, provided $20 million worth of treatment to 6,192 people on April 8 to 10.

I was one of 1,700 volunteers who participated at the Your Best Pathway to Health event. While many of the other 70 students and faculty from Southwestern Adventist University offered medical attention to patients, I spent most of the three days talking and praying with people as they waited for dental treatment.

These are five stories that I witnessed.

The woman embarrassed about her teeth expressed extreme nervousness when her turn came. So we paused to pray as I walked with her to the dentist.

I introduced the woman to the dentist and told him that she was nervous but really wanted to get her smile back. The dentist smiled warmly at the woman and reassured her that he was there to help her smile again.

As I walked away, the dentist placed his hand on her shoulder and, together with his two assistants, prayed with her.

Several hours later, near the end of the day, the woman returned to the waiting area to say thank you. She was beaming! Her smile was beautiful and contagious.

An older gentleman waited all day for a crown for one of his teeth. He had been in line since early morning and, while he waited, he asked about the Adventist Church’s beliefs and why Adventists would voluntarily help others without seeking anything in return.

Unfortunately, he was one person too far back in the line, and the dentists were not able to see him that day. He was frustrated, yet willing to try again. We prayed with him and asked him to come back the next day.

First thing in the morning, as I walked to the entrance of the Alamodome, the man called out to me from the head of the line. He had waited all night to be at the front. Several hours later, he had the crown on his tooth.

A middle-aged, attractive, and impatient Eastern European immigrant dropped in for a tooth-cleaning. She voiced frustration about having to wait. Many names were ahead of hers on the waiting list, and she checked the document frequently, perhaps hoping that this would speed things up.

Finally her turn came, and she disappeared into a curtained cubicle.

She returned to the waiting area several hours later. This time she was smiling, cheerful, happy. Her teeth had been cleaned. Her hair had been colored by the one of the free hairdressers at the stadium. Her attitude was changed. She was a new woman. She gave each volunteer a hug.

On the first day, I was called from the dental team to help the hospitality team.

As I led someone to the eye-care line, a woman already in the line looked at me and exclaimed,“I know you!”

Confused, I fumbled for a response. I did not recognize the woman nor did I know what to say.

Fortunately, she continued to speak.

“I know you. You have been to San Antonio before,” she said. “I met you at the Missions. You prayed with me. You had a little, curly haired girl with you.”

My mind raced. Seventeen years earlier, I had taken my daughter on a trip to the San Antonio Missions National Historical Park, which preserves four Spanish frontier missions. By the time that we reached the third mission on that Sabbath afternoon, my daughter had seen enough.

But then we noticed a disabled woman weaving reeds into the shape of a cross and selling them to visitors. My daughter was fascinated with how this woman was able to deftly create the crosses, and we spoke with her as we watched her work. We did not have any money to give her, but before we left, we asked if we could pray together. After praying, we wished her God’s blessing and left.

Now I looked at this stranger at the Alamodome. The eye-care line moved forward, and the woman took a step. It was then that I noticed that she walked with a limp.

Seventeen years earlier we had prayed together at the park. By divine appointment, in the Alamodome, God brought us together again to pray.

A young mother with two sons waited for hours for a pediatric dentist to put a filling in her younger son’s tooth.

She had insurance, but it did not cover dental care. So when her boss heard about the free clinic, she was given the day off and told to take her sons for help.

This mother had a good job that provided enough money to keep her boys housed, clothed, and fed, but she did not have room in her budget for a visit to the dentist.

She waited patiently in line. Her older son was examined first, and his teeth were cleaned. The younger son’s need was greater and would require more time and effort.

It was 3:30 p.m. when the pediatric dentist became available, only 30 minutes before we were to wrap up the first day. The dentist was a kind, elderly man from Colorado who was understandably exhausted after a full day of standing and treating patients.

He studied the young boy’s X-ray and then peered inside his mouth at the tooth.

Slowly, he shook his head. “We will need to do this tomorrow,” he said.

He asked the mother if she could come back in the morning. She smiled sadly, shook her head, and thanked the doctor. She had to work the next day.

The dentist reassured her that he would take care of the tooth in the morning if she came back. But she could not return.

The mother was kind and thanked the dentist for his time. As she turned to leave, the dentist turned, dropped his head, and removed his glasses. I think I saw a tear at the edge of his eye. I could sense his desire to serve and could see his exhaustion. He understood the difficulty of the cavity and knew that it would require more time than we had left that day.

As the mother and her sons took a step toward the exit, the dentist turned around.

“Wait!” he called after them. “Please come back. That young man needs that filling.”

After praying with the family, I watched the skilled dentist drill and fill the tooth with the help of a student assistant. He meticulously and carefully performed the procedure. After an hour and a half, the boy had a flawless filling made by the experienced hands of a man committed to being God’s hands.

What Needs to Happen Next

The Seventh-day Adventist Church needs to get out of committee meetings and start serving.

We argue about women’s ordination, homosexuality, the nature of Christ, and what is appropriate in worship. These are all important issues. They have a ripple effect. But they also have a way of distracting Adventists from the church’s mission: to seek and to save the lost.

I did not baptize a single person during the three days at the Alamodome. But I shared Jesus, doctrine, comfort, encouragement, hope, love, grace, tears, and words with people created in the image of God who needed help.

Along with hundreds of other volunteers, we ministered to the needs of people. We followed Jesus’ method of reaching people. “Christ’s method alone will give true success in reaching the people. The Savior mingled with men as one who desired their good. He showed His sympathy for them, ministered to their needs, and won their confidence. Then He bade them, ‘Follow Me’” (
Ministry of Healing, p. 143).

It is time to stop fighting as a church and meet the needs of people. I am not referring to just a social gospel. Our theology must be consistent with who God is and what His mission is: to seek and save the lost.

We need to do more of these events where help is given, health and spiritual counsel is shared, food is distributed, stuffed animals are gifted — all in the context of a genuine love that allows people to accept or reject the God we serve.

Article
Morning Meditations On the Mission
I serve, therefore I bless.
Voices
January-born Reflections
A combination of contributions designed for intellectual satisfaction.