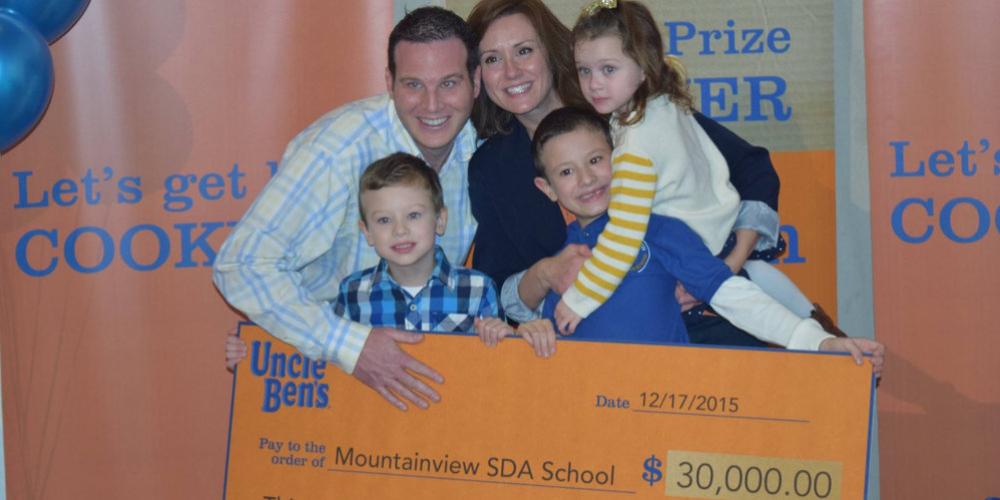 A Seventh-day Adventist elementary school in the U.S. state of Pennsylvania received $30,000 from the Uncle Ben’s rice company for a video that one of its 15 students made about a favorite meal of U.S.-based Adventists: haystacks.

Second-grader Jackson Fulmer won the money for Mountain View Christian School in South Williamsport with “The Adventures of Uncle Ben Boy,” a video demonstrating how to make the healthy vegetarian meal resembling a taco salad.

Jackson dressed up in a mask and red cape to play the part of a superhero throws together the quick meal of tortilla chips, beans, Uncle Ben’s Spanish-style rice, tomatoes, lettuce, black olives, cheese, and sour cream for a family whose children are picky eaters.

He submitted the video, filmed by his father and also starring his mother and two siblings, to the Ben’s Beginners cooking contest. Mountain View Christian School was the only Adventist school of the more than 250 schools that participated in the competition nationwide. Through Facebook, Adventists teamed up across the county to vote Jackson’s video as one of five grand-prize winners.

Watch the winning video about how to make haystacks. (Uncle Ben’s)

“We feel like it was divine inspiration to have this opportunity for the school,” said Jackson’s mother, April.

“We couldn’t have done it without everyone faithfully voting for us,” she said. “It’s been so neat to see our Adventist community rallying behind him. It has been amazing.”

The idea for the video came to father Jeff Fulmer as he was driving home from work on a Friday afternoon several days before the contest deadline.

Jackson found out that he had won on Dec. 10, but he kept it a secret from his classmates until Dec. 17, when a representative from Uncle Ben’s parent company, Mars Food, showed up at the school with $30,000. The representative presented the check to the school at a ceremony attended by South Williamsport’s mayor and officials from the Adventist Church’s Pennsylvania Conference.

Principal Franklin Stahl said the funds would go toward a cafeteria. Students currently eat and play in the gym.

While the contest has given the school a welcome financial boost, it also has helped make it become more visible in the community and underscored its biblical values, Stahl said.

“The local TV station has done three segments, a Christian radio station did an interview, and the story made front page in the newspaper,” he said. “We hear people talking about us. Our mayor was grateful to be a part of our ceremony and requested he be part of a future celebration meal.”

He said the contest also promoted two major Adventist values: healthy meals and families working — in this case, cooking — together.

“The example of one of our very own families whom all students and their parents know demonstrated how this can be done,” he said, adding, “This contest also shows how God blesses even the small.”