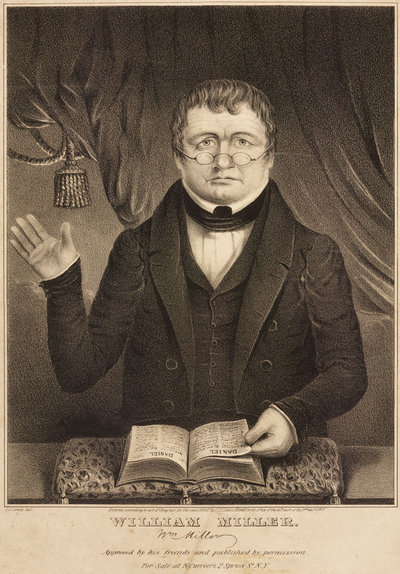 Harmon — whose
later decisions to marry James White and co-found the Seventh-day Adventist
Church had roots in that night — was among some 100,000 people in
northeastern United States who futilely waited for Jesus’ second coming on
October 22, 1844.

Bitter
anguish set in at midnight when they realized that their hopes would not be
fulfilled. Many wept bitterly until daybreak.

“I can’t
even fathom how profound and life-changing an event it must have been, not just
for Ellen White but for all Advent believers who were heavily invested in the
anticipation of Jesus’ return,” White’s great-grandson Charles White said in a
telephone interview.

“It wasn’t just because they were anticipating Him, but
they loved Him dearly,” he said. “They had such a love for Jesus and a desire
to be with Him personally that it was a huge emotional letdown.”

But the Adventist
descendants of those who waited for Jesus 170 years ago this month do not
remember the day with sorrow. Instead they say that the Great Disappointment was
a key moment in Earth’s history that saw the fulfillment of the three angels’
messages in Revelation 14:6-11.

Early
Advent believers didn’t know it at the time. Many abandoned the Advent movement
when the world didn’t end as predicted by William Miller, a Baptist farmer whose study of
Daniel 8 led him to believe that Jesus’ return was imminent.

But those who clung to their
faith and searched the Bible came to the understanding that Daniel’s “cleansing
of the sanctuary” was not a prophecy of Jesus’ return, as Miller had believed,
but the start of Jesus’ final work of atonement. In 1844, Jesus entered the
Most Holy Place in the Heavenly Sanctuary to begin judging who would be saved, His
final action before His Second Coming and a development announced in the first
angel’s message, early believers said.

“The Great
Disappointment story says at least two important things to us: The ‘blessed
hope’ of Jesus’ return is still our hope, our aim, and expectation, and Jesus
is ministering for us now in heaven’s inner sanctuary, during judgment time.
While He does so, we are to take the ‘everlasting gospel’ to the whole world until
He returns,” said William Fagal, associate director of the Ellen G. White Estate,
a depository of White's writings.

Early
Advent believers said the second angel’s message was fulfilled when thousands
of people left their churches in 1844 to join the Advent movement. The third
angel’s message was understood later as a call for people to observe the
seventh-day Sabbath.

The three
angels’ messages form the foundation of the Seventh-day Adventist Church and are
reflected in the name of the denomination.

The spirits
of early Advent believers got a welcome boost about two months after the Great
Disappointment when Ellen Harmon, then 17, had her first vision in December
1844. In the vision, she saw Jesus leading a group of people along a difficult
path to the New Jerusalem, as well as a portrayal of Jesus’ Second Coming. Early
believers understood that the vision meant heaven would be attained by those
who remained faithful despite their current despair.

Ellen
White later wrote that even though the Advent believers had suffered for months
after the Great Disappointment, their pain was nothing compared to that of the
disciples when Jesus was crucified.

“Our disappointment was not so great as that of the
disciples,” she wrote in Signs of the
Times magazine in 1876. “When the Son of man rode triumphantly into
Jerusalem they expected Him to be crowned king. … Yet in a few days these very
disciples saw their beloved Master, whom they believed would reign on David’s
throne, stretched upon the cruel cross above the mocking, taunting Pharisees.”

But some of
the believers from the Great Disappointment lived in despair for decades. Among
them were two relatives, Benjamin Franklin Craig, who only heard about the
three angels’ messages 25 years later in Adel, Iowa, and John M. Robb, who heard
them 30 years later in Kansas, said their great-great grandson Stanley
Hickerson.

“For all
these years they suffered uncertainty about what really happened in 1844, and
found peace when they finally understood the ministry of Christ in the Most
Holy place and its relation to the Sabbath truth,” said Hickerson, an editor at
the Center for Adventist Research at Andrews University.

Hickerson said
the only story that his family had to share from the Great Disappointment centered on the relief and peace that came years
later when the event was finally explained from the Bible.

“Thus the
significance for me of the Great Disappointment lies not in the disappointment
but rather in the explanation,” he said. “Some struggle with the value of the
doctrine of Christ in the sanctuary, but for my family it represents the
solution to a decade-old inexplicable disappointment.” A Personal Event for Charles White

Charles
White, 71, said it is vital for present-day Adventists to remember the Great Disappointment
and expressed sadness that many, especially children, are not aware that it
marked the start of Jesus’ judgment in heaven.

“When I
talk to kids about the sanctuary, and what it means in connection to 1844, they
don’t have any concept of what happened,” he said from Arizona, where he has
served as pastor of the Camelback Adventist Church in Phoenix for the past 15
years.

He added:
“For those who recognize the value of recounting our heritage and our history,
it is still an important and significant event. It is the event from which the Seventh-day Adventist Church emerged.”

The
Adventist Church was formally organized by James and Ellen White and other
believers in 1863, 19 years after the Great Disappointment.

For Charles
White, who has served in the Adventist Church for nearly 45 years, the event of
October 22, 1844, is not only important but also personal. If it weren’t for
the Great Disappointment, his great-grandmother Ellen would never have married
his great-grandfather James.

“That was
what ultimately led them to marriage — the sharing of that disappointment
between James White and Ellen Harmon,” Charles White said.

He
hastened to point out that the two never would have considered marriage before
October 22 because that would have been viewed as a faithless act on the eve
of Jesus’ return. But after his great-grandmother had the first of many visions
in December of that year, James White became her “protector and guide” who
helped her share that and subsequent visions, he said. The couple was married
in August 1846, and remained close
companions until James White’s death 35 years later.

“Guidance
and companionship first emerged from this event, and a relationship followed,”
Charles White said, noting that his great-grandmother often used her own life
as an example in counseling couples considering marriage.

“Romance was
not a significant part of the relationship,” he said. “But obviously it was something
that followed because they had four boys after all.”