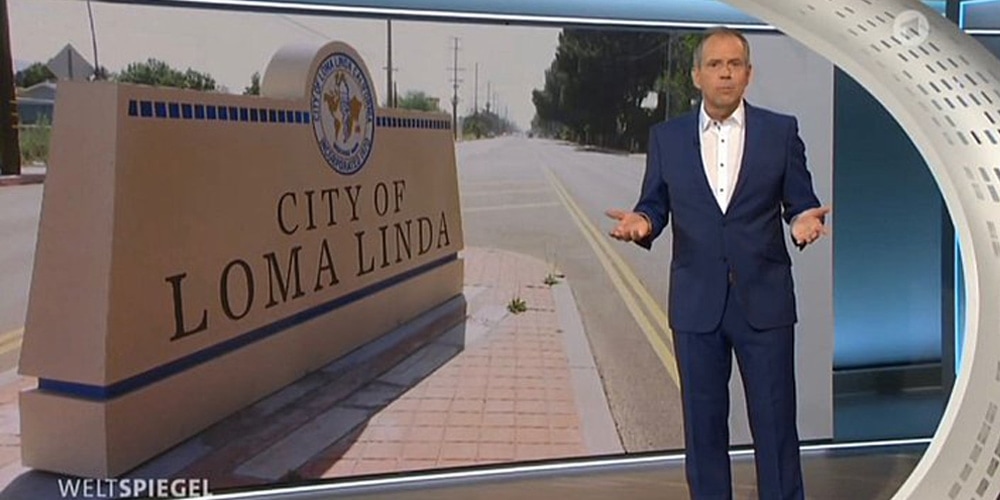 By Adventistische Pressedienst, and Adventist Review

A national TV program in Germany recently featured Seventh-day Adventist members in Loma Linda, California, United States, and their way of life. In a report broadcast on October 24, 2021, ARD’s Weltspiegel discussed the lifestyle of residents in one of the so-called “Blue Zones,” one of the areas in the world where people are significantly older and healthier than the average of similar population groups.

ARD U.S. correspondent Claudia Buckenmaier reported from Loma Linda on the daily life and habits of some members of the Seventh-day Adventist Church in the small Californian town located in the greater Los Angeles area. According to local statistics, about 9,000 Adventist church members live in the area.

During the report, three residents are briefly portrayed, including 104-year-old Jane Pihl, and 82-year-old James Ho and his wife Christine (85). They said they all consistently practice certain health principles, including eating a healthful diet, exercising regularly, and abstaining from tobacco and alcohol. Residents featured also keep socially active through volunteering in various local initiatives. They also said they keep Sabbath [Saturday] as a weekly day of rest. It is a day in which they do not work but attend church services and keep active social relationships with other members, relatives, and friends.

In a long-term study, researcher Gary Fraser and a team of the nearby University of Loma Linda assessed the life expectancy of Seventh-day Adventists. In the ARD report, Fraser summarized one of the team findings: “We found out that men, unlike other Californians, live seven years longer, and women four and a half years. It is quite a lot. That’s how much the life expectancy of an entire population increases in one or two generations.” Diseases such as metabolic syndrome, lung cancer, and mental illness occur much less frequently.

Toward the end of the ARD report, Pihl gives simple advice: “Just do what nature, what God, wants from us. He didn’t want us to sit around and watch TV. Go out into nature and enjoy life.”