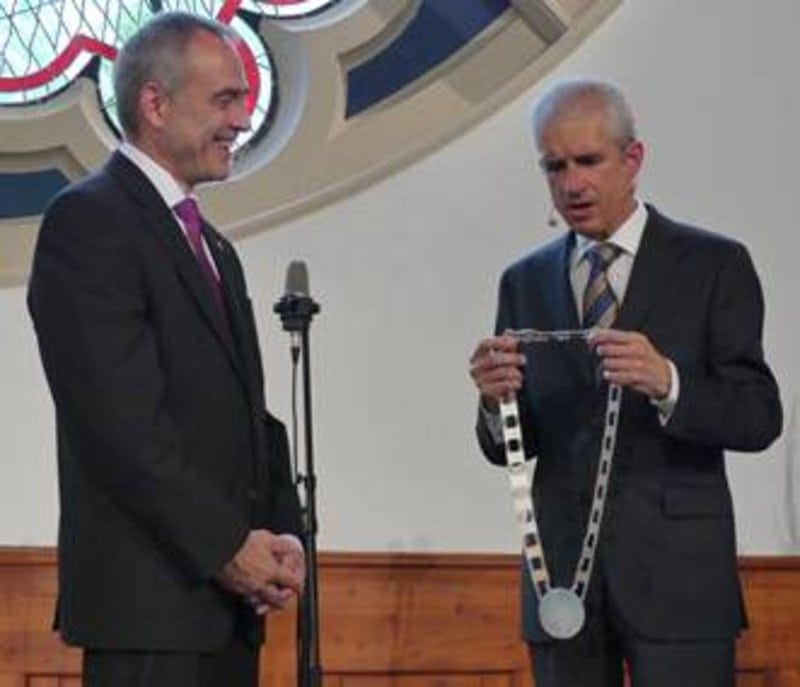 Fischer, 55, who has taught at the Seventh-day Adventist Church-owned university since 2009, replaces Friedbert Ninow as the rector, a position that is similar to president. Ninow moved a year ago to the U.S. state of California to serve as dean of theology at Adventist-run La Sierra University.

Mario Brito, president of the church’s Inter-European Division, whose territory includes Germany, offered words of encouragement to Fischer at the June 25 inauguration ceremony at the university near Magdeburg, capital of the German state of Saxony-Anhalt.

“He stressed that even though a rector carries the responsibility of balancing strong local community ties and academic advancement, he is not alone,” the Inter-European Division said in a statement. “He has a highly dedicated team of employees who, as Christians, can also be trusted to lean on with God's help.”

Fischer, born in 1960 in Bayreuth, Germany, graduated from the church’s Marienhöhe Seminary in Darmstadt in the mid-1980s and later received a master’s degree from the Seventh-day Adventist Theological Seminary at Andrews University in Berrien Springs, Michigan, in 1992, according to his profile on the website of Friedensau Adventist University. He earned another degree in theology at Friedensau Adventist University in 2001, and a doctorate in philosophy from the University of Bayreuth in 2007. His doctorate was titled “Education in Worship. Adventist Bible School.”

While studying, Fischer worked as a youth pastor in Augsburg and in Neunkirchen for seven years, spent 13 years as a senior pastor in Kassel, and led a German institute that trains Adventist pastors from 2005 to 2012, the Inter-European Division said. He joined Friedensau Adventist University as a teacher of practical theology in 2009 and was appointed professor of practical theology in May 2016.

Fischer has been married to Heike Fischer for 35 years, and they have three children.

At the inauguration ceremony, Heinz Schlumpberger, director of education for the church’s South German Union Conference, especially praised Heike Fischer for supporting her husband “all the way” over his years of education and work, the Inter-European Division said.

The event was also attended by Armin Willingmann, a university rector and German state official who oversees an organization of universities in Saxony-Anhalt.

The university, founded as a seminary in 1899, was recognized by the German government as a university in 1990. It currently has about 200 students from more than 30 countries.

“There is no other university that has as much experience with foreign students as Friedensau,” the Inter-European Division said, referring to other universities in the region. “Here inter-culturalism is alive. The university is well positioned internationally.”