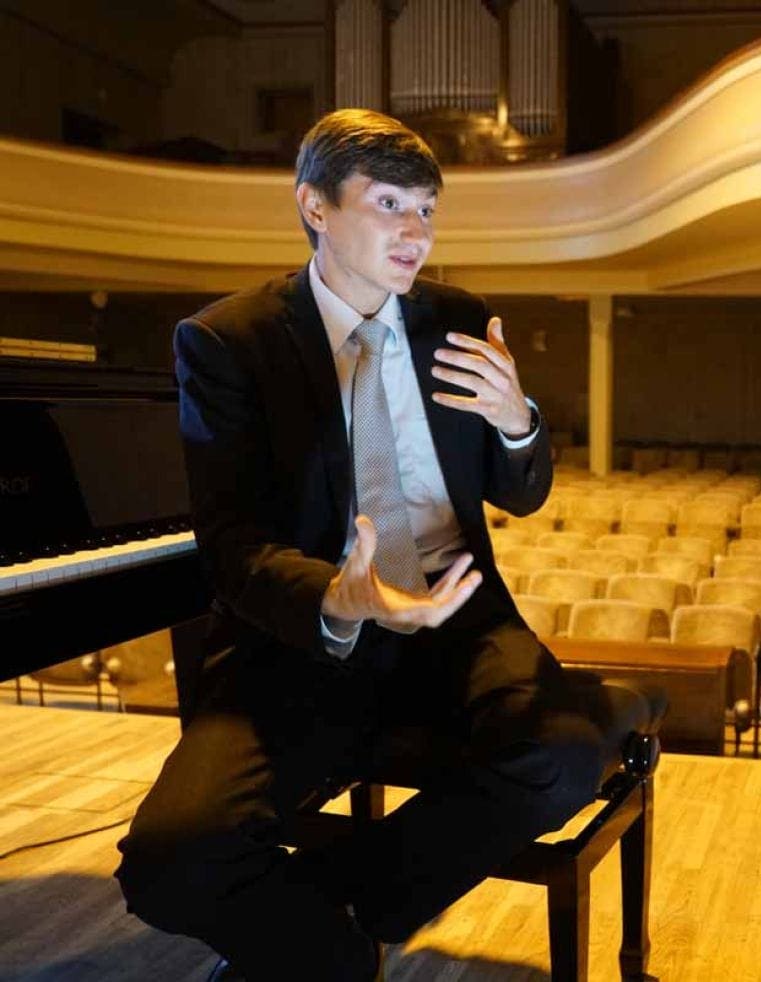 The first time he set foot in a Seventh-day Adventist church, the 17-year-old Latvian boy prayed to somehow serve God.

The second time, he found himself playing the piano for the Sabbath worship service.

A decade later, Mārtińš Subatovičs is the pastor of the same church in Latvia’s capital, Riga. He also serves as music director for the Adventist Church in Latvia, a role that was on full display last weekend when he sang and conducted a 100-member choir during celebrations to mark 120 years of Adventism in the Baltic country.

“I think God answers those prayers very quickly,” Subatovičs said about his first prayer in the Riga church. “Other prayers may require a wait for a reply. But when you pray to serve, God answers quickly.”

Subatovičs, 28, is among a group of young people at the forefront of the Adventist movement in this small country of 2 million people and only 4,000 Adventists. One of Subatovičs’ close friends is Valdis Zelčs, the 27-year-old co-owner of a flourishing health food store just up the street from the Riga church. ADRA’s country director for Latvia is Madara Daukste, a 26-year-old woman bubbling with enthusiasm for serving others.

Subatovičs, the only Adventist in his family, said he saw his first miracle when he was accepted into Latvia’s top choir-conducting school, the Riga Dom choir school. Teachers tested candidates with a new piece of music. This was Subatovičs’ weakness. Although he had finished at the top of his eighth-grade class, he was not able to perform a new piece at first sight. So when the Riga Dom teacher gave him the piece, he was surprised to find that he was familiar with it. He performed it well.

Then the school abruptly canceled a second exam, on music theory, because the testing room was closed for repairs. Subatovičs said he would have failed that exam.

“This school was at a professional level that was much higher than I was able to perform, and God did a miracle that allowed me to pass the entrance exams,” he said in an interview in the Riga First Seventh-day Adventist Church, where he serves as associate pastor.

The first year was tough for Subatovičs. He lived in a dormitory and struggled to catch up with his classmates.

The second year brought a friend, a girl named Daina, who had been baptized into Adventist Church a few months earlier. Subatovičs plied her with questions about her faith during the next two years. He said he learned everything about Adventist doctrine — from the Sabbath to the state of the dead — without once opening the Bible. Then Daina quit the music school to study medicine.

Subatovičs thought about God once in a while but remained convinced that he would never believe unless God appeared before him. That all changed at the age of 17 when he experienced what he describes as a mini-version of Paul’s trip to Damascus. The Lord appeared to Paul during that journey, according to Acts 9.

Subatovičs was thinking about God during a walk near a Riga park when he suddenly realized that God exists.

“I stopped and at that moment God gave me this gift of faith,” Subatovičs said. “For some people, it’s a lifelong journey. For me, it was just at that moment. I received faith.”

Subatovičs struggled to put into words what took place.

“I always thought that I would never believe unless I saw God. But now I know that God can reveal Himself in many different ways,” he said.

The experience confused Subatovičs. He didn’t understand what was happening. But he immediately texted Daina on his cellphone, thanking her for teaching him to believe in God.

Daina couldn’t believe it, Subatovičs said. After two years of answering his questions, she had given up hope.

Subatovičs said everything changed for him that day. He wanted nothing more than to serve God. He returned to the dormitory filled with joy. He knocked on the doors of his classmates, asking what he could do for them.

“I couldn’t keep it in myself,” he said. “I did not witness to them, or talk about Jesus or the Bible. I just said, ‘I want to do something for you. Do you have anything I can do for you now?”

His classmates were surprised to see him take out their garbage and perform other tasks. Soon they began to ask him why he was so happy. He told them about his belief in God.

Subatovičs wanted to do more, and he wanted to be baptized. So he headed to the Riga First Seventh-day Adventist Church, which is located in the headquarters of the Adventist Church in Latvia and is the largest Adventist church in the country, with seating for about 450 people. He had never taken a Bible study in his life, but he believed every word that the Bible said based on what Daina had taught him.

He shyly slipped into the church on a Sabbath morning and prayed silently from his seat: “I want to serve. I didn’t come just to sit. I came to serve.”

God answered his prayer the next Sabbath, he said.

“Something strange happened,” he said. “In the past 10 years, it has never happened again.”

The church had no one to play the piano that Sabbath.

Music is very important in Latvia, which is known as “the land that sings.” Many musicians were always in attendance in the First Church. But the pianist was missing that Sabbath. The worship leader asked whether anyone in the congregation could play. No one stirred.

“I didn’t think I would be very good at playing new Adventist songs at first sight,” Subatovičs said. “But somehow I lifted my hand.”

By the time he had completed Bible studies and was baptized the next year, he had already founded a church youth choir, a position that he holds to this day. The choir performs about 10 concerts a year, usually at venues other than churches. Subatovičs, who now pastors a total of three churches in Riga, considers the choir to be his fourth church.

“We have members who are not Adventist,” he said. “They are friends of Adventist choir members. Through music, they come to Christ.”

The choir is open to nearly anyone, even those without a singing voice. Subatovičs recalled that when he first formed the choir, two of three members “were singing their own melody.” He winced as he conducted the choir.

“The sound that we made was not a heavenly sound,” he said. “But we wanted to serve God.”

God made up for the choir’s deficiencies at its first concert, he said. When it came time to sing, he lifted his hands to conduct, the accompaniment music started playing, and “the most heavenly sound” rose from the choir, he said.

“I realized that this was not a sound that we could perform,” he said. “I was confused. I was surprised. I had to conduct, but I wondered where this sound had come from. This was not our choir.”

Subatovičs believes angels joined the choir that day. He pointed to a passage by Adventist Church cofounder Ellen G. White, where she wrote, “When human beings sing with the spirit and the understanding, heavenly musicians take up the strain and join in the song of thanksgiving” (Testimonies for the Church, Vol. 9, pages 143-144).

Subatovičs said he believes that angels have sung at nearly every subsequent concert.

The people who heard his choir sing in a Riga music hall last weekend during the 120th-anniversary celebrations of the Adventist Church in Latvia would no doubt agree.