Hundreds of Seventh-day Adventist young people hit the streets to share Jesus during the annual GYC convention every year. But it’s not every year that the police get involved.

Nearly 2,000 attendees from the five-day Generation. Youth. Christ (GYC) convention in Louisville, Kentucky, knocked on more than 33,000 doors and passed out 40,000 pieces of literature over four hours on Friday, Jan. 1, as part of GYC’s usual outreach to the residents of the city that hosts its yearly gathering.

But this year GYC received many calls from the police inquiring why so many young people were going around knocking on people’s doors, GYC leaders said.

Attendees said the police also stopped them to inquire what was going on. One police officer, who stopped his car to ask a couple of GYC attendees what they were doing, ended up parking the vehicle and getting out when he learned that they were sharing their love for Jesus. The police officer also allowed the pair to share their stories with him and accepted a copy of The Desire of Ages by Adventist Church cofounder Ellen G. White when they had finished.

Evangelist Mark Finley, who preached the convention’s Sabbath sermon the next day, urged the audience of some 6,000 people to follow the example of the biblical hero Daniel in remaining faithful in sharing Jesus no matter what other people say.

“God tamed the lions in the den,” Finley said. “God is still a lion tamer today.”

It was a message that attendees would not soon forget after the convention, themed, “Called. Chosen. Faithful,” ended on Jan. 3. The next GYC convention will be held in Houston, Texas, from Dec. 28 to Jan. 1 with the theme, “When All Has Been Heard.”

Read Jared Thurmon's first-hand account of his Sabbath at GYC

On Friday, Finley provided GYC attendees with short instructions before they grabbed sack lunches and boarded 42 buses to head out into Louisville. Attendees had several options: They could go to Nazareth Home, a local nursing home, to sing and speak with the residents; they could go door-to-door, passing out GLOW tracts and praying with people; or they could go on a canned food drive, picking up non-perishable food items for the Louisville Rescue Mission, a major local food bank.

When all was said and done, 1755 attendees had knocked on 33,077 doors, signed up 1,344 requests for Bible studies, 3,335 requests to participate in physical and mental health programs, and 267 requests to attend a Revelation seminar. The young people prayed with 2,374 people.

One GYC participant, Erik Colthirst-Reid, said he was aware of the power of prayer but had never seen it in action as he did on Friday. He said he, his wife, and a friend went door to door, with one of them speaking and the other two standing by, praying silently.

“I had never heard that before,” Colthirst-Reid said. “From the very first house we saw the power of prayer.”

The woman who opened the door at the first house looked distracted and uninterested, he said. She listened to the friend speak but repeatedly looked back into the house. Colthirst-Reid said he and his wife prayed silently that the woman “would see not them but Christ and that He would soften her heart.”

The woman then began to talk with the friend.

“It’s so amazing because as they were talking you could see her eyes brighten and her interest grow,” Colthirst-Reid said. “As her interest grew, she said she was interested in all the different health seminars. She received all the materials we were providing, and then she accepted prayer.”

Read Thousands of Young People Descend on Kentucky for GYC

Colthirst-Reid said that before Friday he had been scared about how the people would react when he knocked on their doors even though he was well acquainted with Jesus’ promise in Matthew 17:20 that faith can move mountains.

“But how much easier is it for the Holy Spirit to move men’s hearts,” he said. “We really saw that today during outreach.”

Magazine Article
After the Dust Settles
Adventist public engagement after the tumultuous year 2020.
News
ASi Convention Attendees Say They Are Glad to Finally Meet in Person 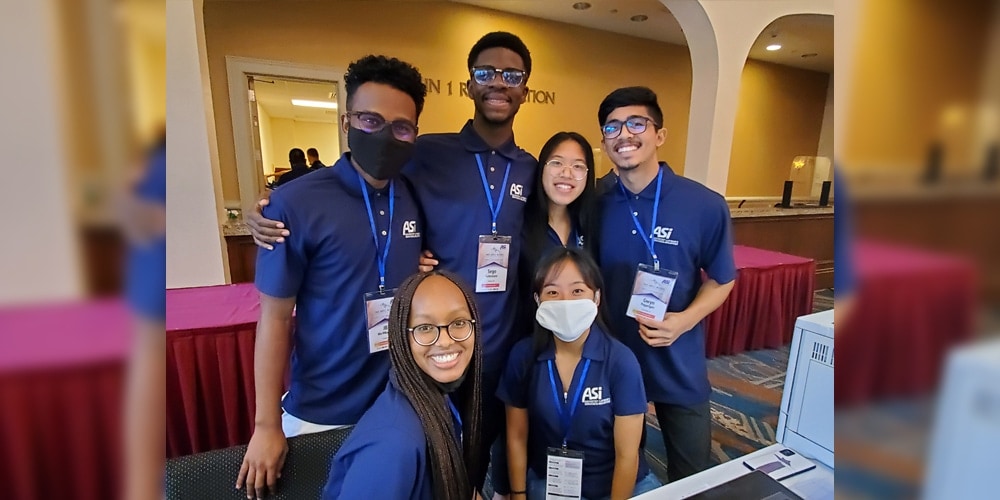