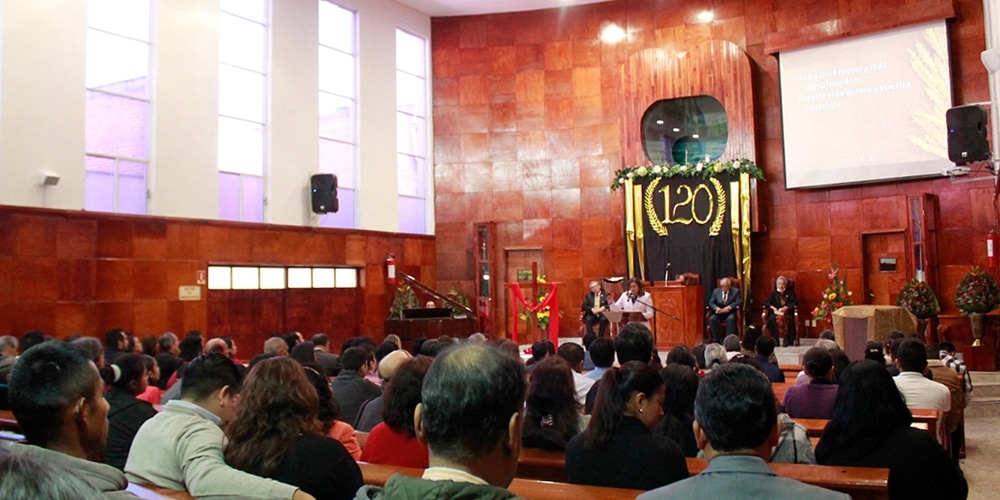 Leaders and members of the Tacubaya Seventh-day Adventist Church in Mexico City, Mexico, recently celebrated the 120th anniversary of the organization of the church there.

The celebration brought former and current leaders and members together to reminisce on God’s blessings and the growth of the Adventist message throughout the nation.

The church in Tacubaya was the first Seventh-day Adventist church organized in Mexico. In 1891, an Italian Adventist missionary arrived in Mexico City to distribute 2,500 copies of The Great Controversy, a book written by Ellen G. White, a co-founder of the Seventh-day Adventist Church. Later, in 1899, George Washington Cavines, together with other missionaries, established the first Adventist church located in the Escandon suburb, as reported in the book 100 Años del Adventismo en Mexico, or 100 years of Adventism in Mexico, authored by Adventist pastor Velino Salazar.

Today, Mexico City and its metropolitan region has 254 Adventist churches and more than 88,000 church members.

The church in Mexico currently has five major church regions that operate more than 4,691 churches with more than 781,000 members.

“From the very first church established, the publishing house, the first school that later changed its headquarters to Montemorelos, Nuevo Leon, and later the Sanitarium, we have witnessed the great progress of the work in Mexico,” said David Javier, president of Adventist-operated GEMA Editores (Mexican Adventist Editorial Group) and a member of the Tacubaya church.

The celebration program featured testimonies from some of the congregation’s former pastors and members.

“I remember clearly the old church building,” said Noe Luna, an elderly member. In 1960, the church was rebuilt to seat 400 people, replacing the much smaller original structure. “I was a boy when they decided that the church should be bigger, and they took everything down and built a new place with greater capacity,” he said.

Angel Ramírez, who pastored the Tacubaya Adventist church in the 1970s, remembered when 100 new members were baptized in one day. He also talked about the installation of  new pews and the construction of the Adventist-run sanitarium next door to the church.

“It’s been 48 years since I pastored this church,” Ramírez said. “We grew as a church, and we supported Ignacio Altamirano Adventist school, as well as the sanitarium.”

The program also featured many video messages from former pastors and leaders of the church, who encouraged current members to continue in the faith and bring others to the feet of Jesus.

Abner De Los Santos, who serves as vice president of the Adventist world church and who was formerly a member of the Tacubaya church, sent greetings and encouraged members to continue reaching out to those in the community.

A commemorative plaque was unveiled at the entrance of the Tacubaya Adventist church during the special ceremony.

César Hernández, president of the Azteca Mexican Conference overseeing parts of Mexico City, congratulated former and current members for their hard work in being instrumental in expanding the work of the church in Mexico.

“Remain strong and faithful, sharing the hope of the gospel wherever you go,” he said.