Demanding Schedule for Ted Wilson During First Visit to Cambodia 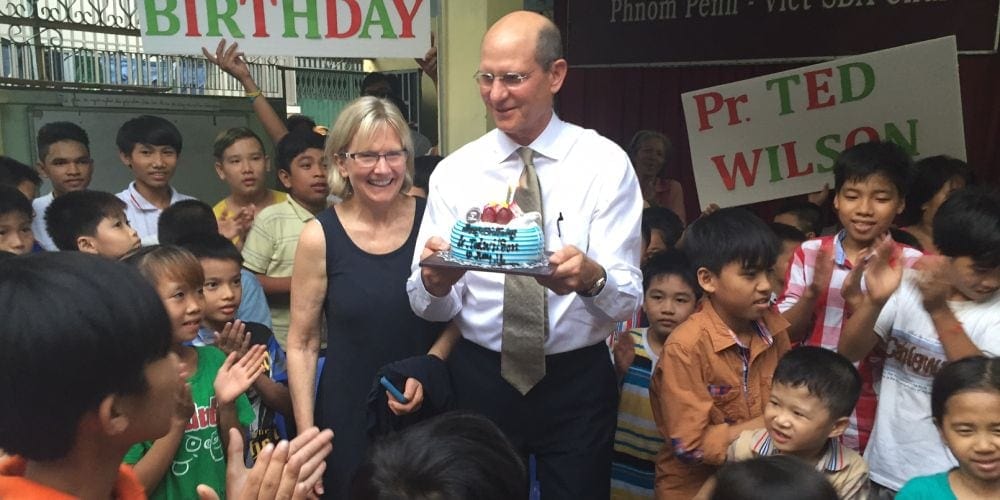 “I don’t get tired on Sabbath because of the Sabbath blessing from God,” Nhen, who pastors a total of 12 churches, said as he taught the Sabbath School lesson to a packed hall of 600 people in Phnom Penh on Sabbath.

The Sabbath blessing that Nhen described may well be the same blessing that sustains Seventh-day Adventist Church president Ted N.C. Wilson as he follows a demanding schedule of his own.

Wilson, who attended the Sabbath School, is halfway through his longest trip in his six years as president.

“This is the longest trip that I have ever made. Period,” Wilson said, speaking shortly after arriving in Phnom Penh on Friday.

Wilson’s nearly seven-week trip began on April 13 when he left his home in the U.S. state of Maryland for a constituency meeting at Loma Linda University Health in California. He then flew to Caracas, Venezuela, to preach at an evangelistic rally and witness the mass baptism of 4,012 people.

From there Wilson set off on an extended tour of the South Pacific, meeting and encouraging church members in Samoa, American Samoa, Fiji, Vanuatu, and the Australian cities of Brisbane, Alice Springs, Finke, and Perth.

Wilson will only return home at the end of May. Later this week, he will visit Rwanda to participate in a two-week evangelistic series that is expected to culminate with 100,000 baptisms on May 28.

What might seem like a grueling travel schedule is all in a day’s work for Wilson. His Sabbath visit to Cambodia serves as a microcosm of a typical day on the road.

Wilson and his wife, Nancy, awoke at 3 a.m. Friday in Perth, Australia, for the long flight via Singapore to Phnom Penh. They landed about an hour before sunset.

The large welcoming delegation at the airport was led by Lim Teng Pheng, president of the Adventist Church in Cambodia, and included Johnny Lubis, vice president of the church’s Southern Asia-Pacific Division in the Philippines, and Jannie Bekker, assistant to the president of the Southeast Asia Union Mission in Singapore.

“Church members are very happy, very excited, that the world leader has come to visit us in Cambodia,” Pheng told the
Adventist Review. “This is a small country with a small membership. Yet he took the time.”

The Adventist Church has 6,200 members worshipping in 159 congregations across Cambodia. The last church president to visit here was Jan Paulsen in the early 2000s.

At the airport, a local newspaper reporter interviewed Wilson for about 20 minutes about his visit, his first to Cambodia, and a group of smartly dressed Pathfinders saluted as he left the building.

The original plan had been to head straight for the hotel, but Wilson learned at the airport that local church members had pleaded for him to speak for vespers at Central Adventist Church, located at the Cambodian Adventist Mission headquarters. So he spoke at the church.

The busy schedule resumed at 8:30 a.m. Sabbath when Pheng drove the Wilsons to the International Christian Assembly Hall.  About 500 seats were placed initially in the hall, which local church leaders had rented from another denomination to accommodate the large number of people who wished to hear Wilson speak. But another 100 seats were added as the audience swelled.

With Pheng acting as interpreter, Wilson shared stories about faithful church members whom he has met around the world, including in the South Pacific and Iraq, which he visited in February. Wilson, underscoring a church initiative called Total Member Involvement, encouraged each person in attendance to follow the example of those faithful members in finding ways to actively share Jesus in their communities.

“What are you doing for Jesus?” he said. “Jesus asks you to be totally involved in His work. He wants you to be telling someone outside these four walls.”

After the sermon, people pressed around the Wilsons to speak with them and take photos.

Later the Wilsons headed back to the Cambodian Adventist Mission for a potluck lunch with the 14 ordained pastors who work in Cambodia. Wilson spoke and prayed with the pastors for about 30 minutes, reminding them that actions speak louder than sermons and urging them to implement Total Membership Involvement in their congregations.

Climbing back into the van, the Wilsons rode to ADRA’s Cambodia office to hear a report about its activities. In a speech, Wilson praised gathered ADRA workers for acting as “the hands and feet of Jesus” by providing drinking water, education about reproductive health, and other programs.

The next stop was the Cambodian Adventist School, built with US$180,000 raised in a Thirteenth Sabbath offering nearly two decades ago. With 457 students, the K-12 school is filled to overflowing and also houses about 30 students in two dormitories built by the Adventist church in Collegedale, Tennessee, principal Sharon Rogers said. About six students are baptized every year. Wilson, in a speech to students and teachers, reminded them about the importance of heeding the wise man’s words in Ecclesiastes 12:1: “Remember your Creator in the days of your youth.”

Wilson opened his Bible to 3 John 2 for his speech at the next stop: the factory of Heartland Development Organization, a natural foods company owned and operated by Adventists.

“Dear friend, I pray that you may enjoy good health and that all may go well with you, even as your soul is getting along well,” Wilson read from his Bible as he encouraged company employees to press ahead in their efforts to provide healthy granola, curry paste, peanut butter, and other foods to the people of Cambodia and beyond.

As the afternoon wore on, the constant travel, the speeches at every stop, and the sweltering temperature of 100 degrees Fahrenheit (38C) began to take a toll on the visitors. But the Wilsons did not complain or slow down. They both acknowledged later, however, that they had started feeling a little tired by late afternoon.

“It takes a lot out of you, but the Lord provides,” Wilson said.

The Lord did seem to provide at the next — and last — stop: the Viet Adventist Church School, which educates refugee Vietnamese children. A courtyard filled with children greeted the Wilsons with joyful Sabbath songs, and several students recited the 10 Commandments from memory in the Vietnamese language.

The school principal, Pham Qouc Khanh, told Wilson how the school, which is primarily sponsored by Adventist Southeast Asia Project (ASAP), had opened with little more than a prayer a decade ago and now educates 250 students on two campuses.

The children listened transfixed as Wilson told a story about the positive influence that two little boys had had on a patient at the Adventist hospital in Ethiopia.

Then the children, most of whom do not come from Adventist families, surprised Wilson. A child presented Wilson with a round cake inscribed to “Ted Wilson” as the other children merrily sang “Happy Birthday.”

A lit candle burned brightly atop the cake’s white-and-blue frosting. As a gift, a group of children recited Psalms 23 from memory.

“That was a highlight of the day,” Nancy Wilson said later.

“So precious,” Ted Wilson added softly. “Those children were so precious.”

At the school, all traces of weariness vanished from Ted Wilson’s face as he accepted the cake and praised the children for memorizing Psalm 23. Both he and Nancy Wilson returned to their van with noticeably renewed energy.

The Wilsons would no doubt agree that the pastor got it right when he said in Sabbath School earlier that morning, “I don’t get tired on Sabbath because of the Sabbath blessing from God.”